The proposed River Pointe Park subdivision would have included 100 units of mixed residential housing on 10 acres in a flood plain.
Oct 22, 2020 3:53 PM By: Jason G. Antonio 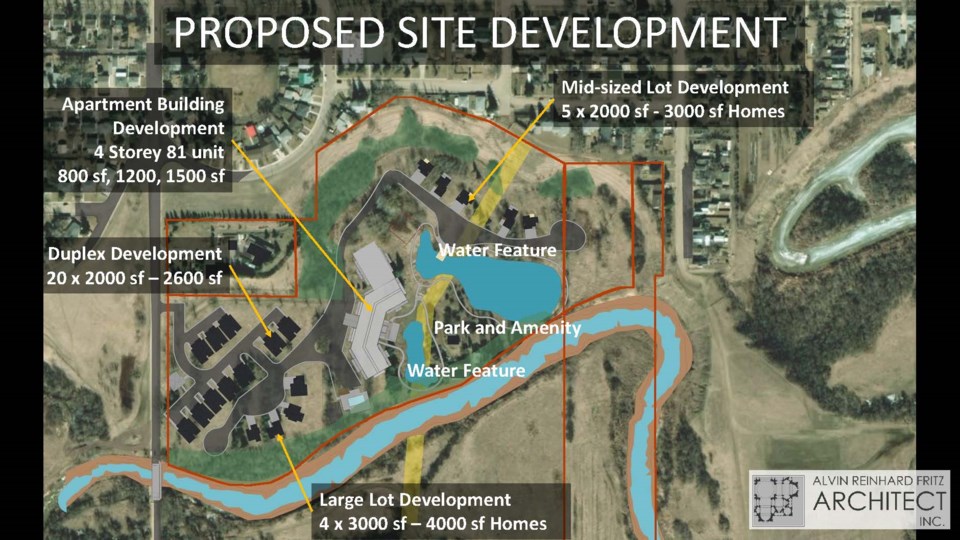 Community businessman Charles Vanden Broek has withdrawn his request to amend the Official Community Plan (OCP) that would have allowed him to develop housing in the river valley.

Vanden Broek, along with Alberta developer Alvin Rienhard Fritz Architect Inc., wanted to build a 100-unit upscale housing complex on 10 acres — in a flood plain — of privately-held land in Wakamow Valley adjacent to Seventh Avenue Southwest. The businessman approached city council on Sept. 21 and made his pitch about creating the River Pointe Park subdivision.

During the meeting, it was revealed that city administration worked with Vanden Broek for 18 months, which surprised most city council members.

After significant community pushback arose — including the creation of several petitions — Vanden Broek informed the City of Moose Jaw that he was withdrawing his request to amend the OCP. City hall issued a news release on Oct. 22 announcing the change.

“The city encourages private development. We provide advice and direction to developers on what is required to make an Official Community Plan amendment request that that it can be brought forward to council and the public for consultation,” city manager Jim Puffalt said.

“Public consultation is integral and is enshrined in provincial law and city bylaws. Official Community Plan amendments cannot occur without it,” he continued. “We thank Moose Javians for providing their thoughtful initial feedback on this proposed development, and we thank the River Pointe Park team for expressing interest in Moose Jaw and fulfilling all obligations required by our administrative process and bylaws.’

Vanden Broek and his architect firm approached city hall in May 2019 about the project.

City hall advised that several reports were required so that the municipality could comprehensively review the proposal and consult with the Wakamow Valley Authority (WVA), the news released explained. The concept plan and proposal were forwarded to the WVA board in March 2020 for its consideration, and after reviewing the information, the board provided feedback in the form of a letter with concerns.

Project developer Alvin Fritz responded to each concern during the Oct. 19 meeting and assured council that those worries were manageable.

The project was delayed until September 2020, while the developer completed a necessary report, the news release said. City administration brought the issue to council on Sept. 21, while the remainder of the reports were expected Oct. 19. The public was to provide its input then about the proposed changes to the OCP.

When the developer confirmed that the remaining reports would not be available by then, city administration — going against the wishes of city council — extended the public consultation process into 2021.

In a follow-up email to the Express, Puffalt explained that the heritage screening study — an archaeological assessment — took longer than anticipated. Once completed, the province had to review it as well, which also took longer than expected.

When asked why he hadn’t communicated the project to council for 18 months, Puffalt replied that this particular property is privately owned and the developer wasn’t looking to purchase city-owned land. To have discussed this project with council or the public would have prematurely divulged the options that Vanden Broek was considering.

“Not only would it be inappropriate for City staff to discuss these plans broadly without the owner’s permission, it would be a clear breach of confidentiality, which would expose the City to legal liability … ,” Puffalt said. “When the property owner is ready to pursue his plans with required consultations and approvals, that is the time when public disclosure is appropriate — with the consent of the property owner.”

Vanden Broek performed extensive groundwork ahead of time, but city administration needed further clarification on reports from provincial agencies, Puffalt continued. Until that happened, city hall could not recommend the project to council since it needed complete information before deciding.

“As a member of the City’s Economic Development team, Mayor (Fraser) Tolmie was aware of this development proposal but was bound by the same confidentiality guidelines indicated above,” Puffalt said, adding this project could come back if the developer followed the same procedural requirements as before.