Vanier student Grace Kiefer is headed to the national Skills Canada competition after securing a first-place win at the provincial level
May 19, 2021 1:55 PM By: Larissa Kurz 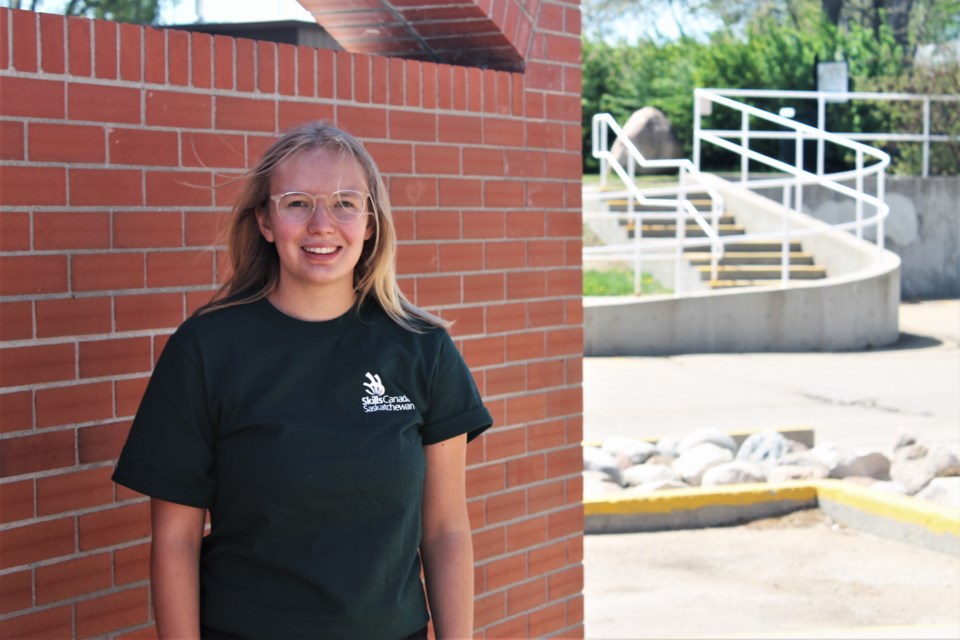 Vanier Collegiate student Grace Kiefer, who is representing Saskatchewan at the upcoming national Skills Canada competition on May 26. (photo by Larissa Kurz)

One local student from Vanier Collegiate will be competing in the nationwide Skills Canada Competition, which brings together high school and post-secondary students to test their competence in a variety of skills related to the trades.

Grade 12 student Grace Kiefer recently took part in the Skills Canada Saskatchewan competition, held virtually this year on April 16. She was the only Vanier student able to compete, as the three other students set to take part had their categories cancelled for the year.

Kiefer won gold in her skill category of Job Search, where she put together a cover letter and resume, created a presentation about skills, and took part in a mock job interview.

“I learned a lot, especially about making a resume and a cover letter,” said Kiefer, of the experience.

Now, Kiefer is moving on to compete in the same category at the national level, for a chance at another gold title and accompanying prizes. She will be representing all of Saskatchewan at the virtual event on May 26.

“It was really cool, because I never thought I’d get to do this experience and so it was sort of unexpected, but it’s really awesome to represent Canada and Saskatchewan,” said Kiefer. “It’s definitely really exciting [to be going to nationals].”

Typically, Vanier students take part in the Skills Canada competition every year, said teacher advisor Christa Lapointe, alongside other students from other schools in Moose Jaw.

The Skills Canada competitions seek to encourage students who have an interest in skills related to the trades and who demonstrate quality and proficiency.

Although this year’s events have all been held virtually, the competitions are really meant to expose students to the trades in a more realistic environment than in a classroom. All students who compete have to do so on their own, with no help from teachers or advisors.

“It's a great opportunity for students to highlight their skills and abilities, and to further develop and hone in on improving their trade and their skillsets,” said Lapointe.

For Kiefer, she feels her experience so far with the Skills Canada program has certainly given her a leg up on her future — especially as many job interviews are occurring almost exclusively virtual right now.

“I actually did my first official job interview after the competition and some of the questions I was asked were similar to the ones asked in the competition, so it was great practice,” said Kiefer.

Kiefer credited her mom’s influence for getting her interested in the program, as she is a teacher at A.E. Peacock Collegiate who takes students to the Skills Canada competitions, and Lapointe’s support for helping her get involved this year.

If Kiefer succeeds with another gold placing at the national competition, she will qualify to take part in the international WorldSkills Competition scheduled for later this fall.

She also encouraged other students to consider taking part in next year’s Skills Canada competitions.

“Reach out to people to help you get involved because they always have extra information that you can use and there’s benefits from this, from any perspective,” said Kiefer.