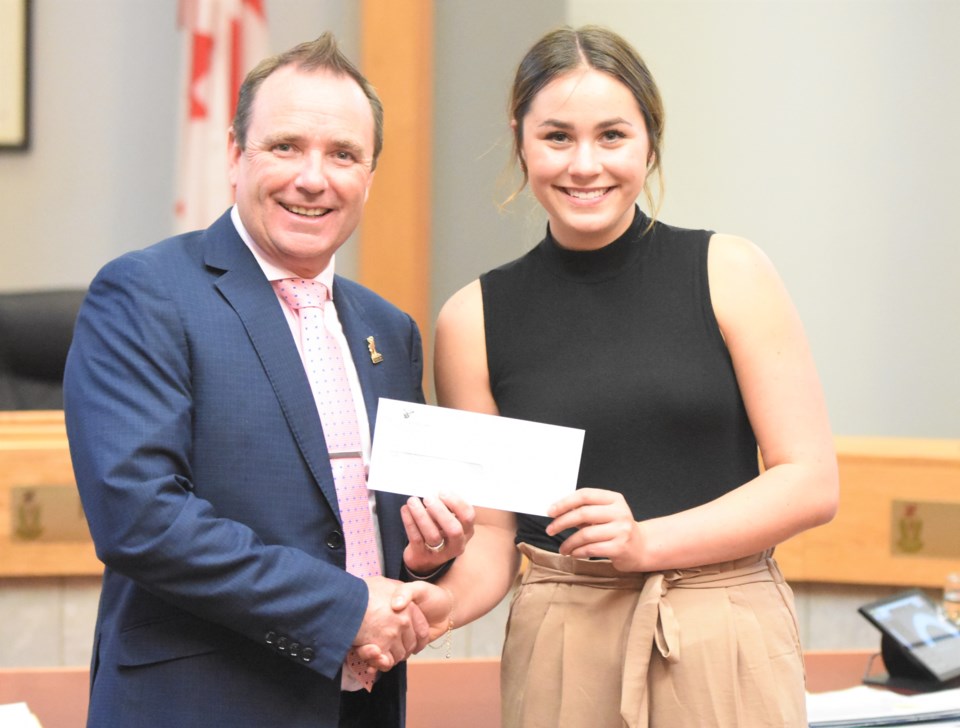 The City of Moose Jaw’s scholarship selection committee chose Meili from “another stellar field of candidates” from Moose Jaw-area schools, Lori Meyer, co-ordinator of Prairie South School Division’s Bursary Fund program, explained in a letter to city council. Meili graduated from Vanier with an average of 96.3 per cent; she has now begun studying at the University of Regina.

Besides Meili’s academics, she was also involved in her community and school, Meyer continued. For example, Meili was active in five school sports, music programs, and youth leadership.

In the community, she was a volunteer at Riverside Mission, Sets4Supper, the City of Moose Jaw Youth Advisory Committee, and the Duke of Edinburgh Awards Program that encourages youths to volunteer in their community and be an example to others.

“Jenna is definitely an excellent example of a hard-working student who is able to balance outstanding school and community involvement with outstanding academic achievement,” added Meyer.

Meyer sent a letter to city council announcing Meili as the winner of the scholarship. City council unanimously received and filed the report during its Sept. 9 regular meeting. Mayor Fraser Tolmie presented the scholarship cheque of $2,385.02 to Meili at the start of the meeting.

In 1982, the City of Moose Jaw entered into a trust agreement with Boris Dubinsky and Administrative Consultants Limited. The purpose was to establish an endowment that the municipality would hold, with interest from the main endowment awarded annually as part of a scholarship to a Moose Jaw high school student pursuing university or college.

The amount of the scholarship is supposed to be equivalent to the amount of income the trust fund earned in the preceding 12-month period. The fund’s trustee is not allowed to use the capital of the fund — or any portion thereof — for any purpose other than for earning income for scholarship awards.

The directors of education from Prairie South and Holy Trinity Catholic school divisions determine which nominated graduate should receive the scholarship.

The next regular council meeting is Sept. 23.