Special vehicle parade to tour city on Sunday afternoon in honour of moms and ladies of Moose Jaw
May 7, 2021 7:35 PM By: Randy Palmer 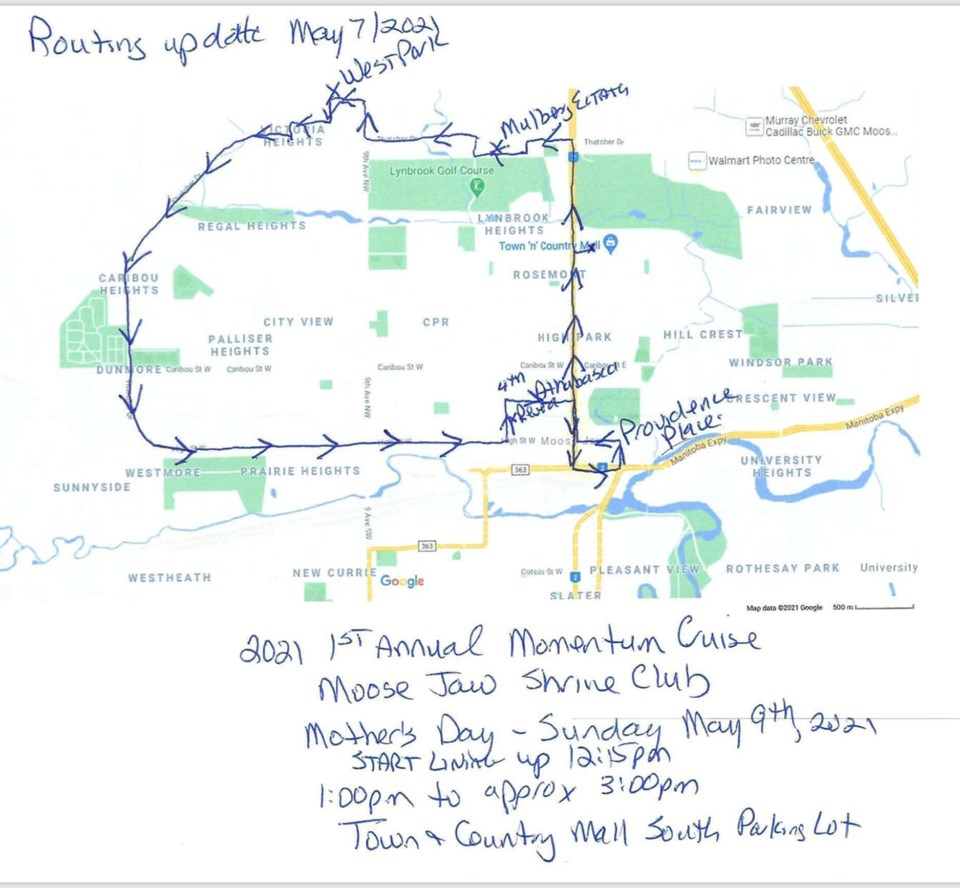 Organizers for the Mother’s Day car parade have finalized their plans and route, word has spread about their venture, and now all there’s left to do is hit the streets at 1 p.m. on Sunday afternoon.

“Now we’re just hoping the weather will be good and it’ll turn out well,” said Aaron Ruston with the Shrine Club. “I’ve heard some good things, but the one thing with car people is you never know until the day of how many are going to be there. I wouldn’t be surprised to see 100 to 150 cars, but there might be 10 and there might be 200. You just never know, and the weather will help dictate that.”

The current plan is largely the same as the original. A route touring past four retirement homes has been put together and will see the parade passing by Mulberry Estates, West Park, Revera and Providence Place to honour the moms and ladies living and working there.

That’s the theme of the whole event -- hence the MOM part of MOMentum -- and things will run similarly to the wildly popular birthday parades last summer.

The route has changed slightly from the original, though, after Ruston did a bit of exploring to determine how conducive it would be for show cars to take part.

“I drove it again and the one road we planned was just terrible,” he said. “I wouldn’t take my cars down it so why would I expect someone else to, right? It was just too rough. And this  way there’s fewer stoplights and people can open it up a bit within reason on Thatcher, it just makes it a little more of a cruise than a stop-and-go.”

Folks can start gathering at the Town ‘N’ Country Mall parking lot on Sunday starting at 12:15 pm., and it won’t be hard to find the Shriners there. Just look for the bright yellow Plymouth Prowler that will be leading the parade and is also the top prize in their annual car draw taking place this September.

Once things are lined up, the parade will depart at 1 p.m., and the tour is expected to take about two hours.

Ruston is asking participants to do all they can to stay safe before the tour begins.

“We’re asking again that everyone abide by social distancing rules and wear a mask,” he said. “I know it’s hard when you’re talking cars with people and stuff, but we’re asking people to stay in their vehicle as much as they can, just to be respectful for everyone.”

For the latest updates on the Moose Jaw Shrine Club, be sure to visit their Facebook page at www.facebook.com/MooseJawShrineClub/.