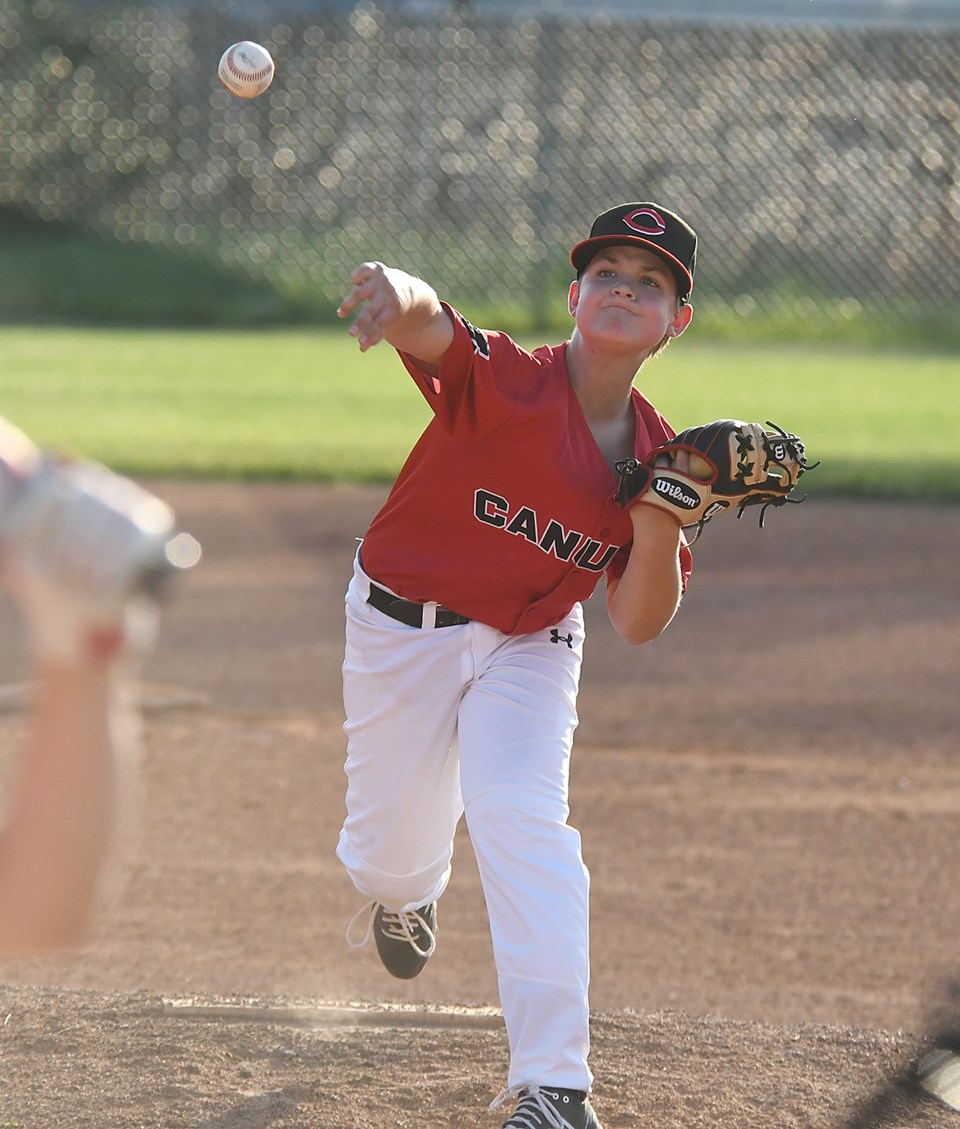 Tyson Ross delivers for the 13U Canucks during third inning action against the Buffalos.
The Moose Jaw Canucks didn’t have a tremendous amount of luck in Baseball Regina AAA league action on Thursday night.

The 13-and-under Canucks took an early lead but were unable to make it stick in a 9-5 loss to the Regina Buffalos at Andrie Diamond, while the 15U Canucks dropped an 11-0 decision to the Buffalos in Regina.

The Canucks got off to a solid start, as they were able to send eight batters to the plate in the opening inning and put up three runs before taking on another in the third for a 4-2 lead.

Regina got all that back and then some in the fourth, scoring four runs and taking a 6-4 edge. The two teams exchanged single runs the next two frames before Regina closed things out with a pair in the seventh.

Noah Thul finished the game 1-for-3 with a run scored and a run batted in and came within a few feet of a two-run home run in the third before settling for a long fly out. Wesley Olson, Owen Varjassy and Garrett Gulutzan had the Canucks’ other hits, of which they had four on the night to go along with eight walks.

All three of the Canucks pitchers were hurt by errors, as only two Buffalos runs were earned.

Max Simmons and Tyson Ross allowed six runs, none earned, over four innings. Simmons got the start and gave up a single hit while striking out four and walking six, surrendering two runs in two innings; Ross gave up four runs on two hits the next two frames. Varjassy tossed the final three, giving up two runs on five hits while striking out five.

A string of tough games continued for the Canucks in Regina, as they managed a single hit and committed six errors in the five-inning mercy-rule defeat.

Regina carried a no hitter into the fifth inning before Brendan Gerbrandt hit a one out single. Matthew Knox was their only other baserunner, drawing a walk in the third inning.

The Buffalos did most of their damage in the third when they scored six runs to take an 8-0 lead.

Nathan McDougall got the start and allowed three runs on two hits and three walks in two innings; Gerbrandt allowed one earned run on four hits, striking out three in his two frames of work, Javin Boynton closed things out giving up three runs on three hits in the final inning.