The local church rang their bells every day at noon since the pandemic began in a show of solidarity with their community
Jul 3, 2020 2:00 PM By: Randy Palmer 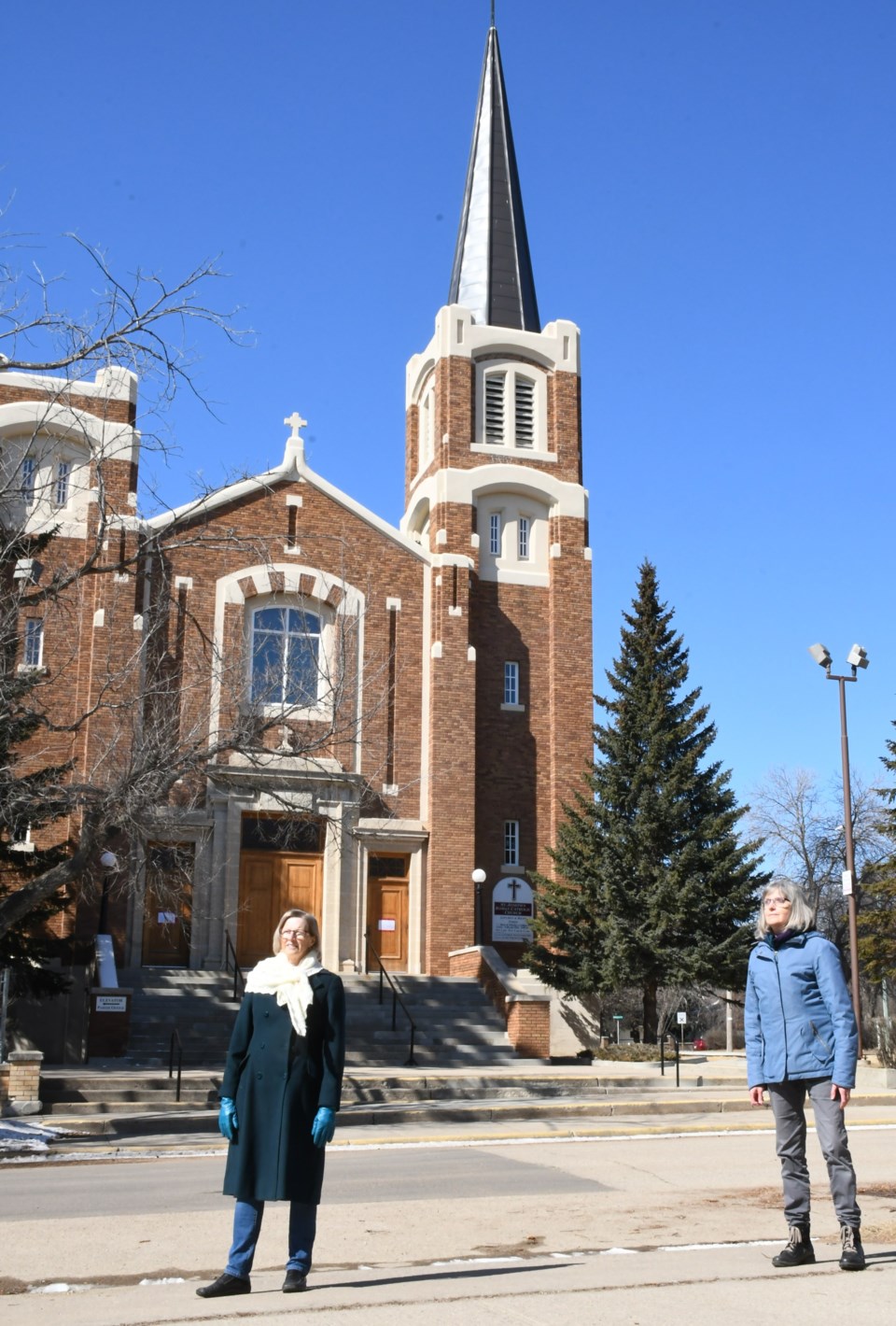 Janie Fries and Rosalie Boots stand outside St. Joseph Roman Catholic Church and listen to the bells ring out. The bells have now gone silent as the battle with COVID-19 has reached an end stage. (Photo by Jason G. Antonio)
Never has silence been more golden.

Ever since the COVID-19 pandemic reached the point that the government of Saskatchewan decided to close down much of the province, St. Joseph’s Parish has made it a priority to ring their bells every day at noon.

Canada Day marked the first time in months that the ringing peel wasn’t heard — and for good reason.

The church had decided that with the province reaching the point of nearly fully reopening, the bells didn’t need to ring any more. And that brings us to why they were sounding out in the first place — with it all going back to November 11, 2018.

“St. Joseph and St. Aidan, they both rang their bells to commemorate the end of the First World War,” explained St. Joseph Parish member Janie Fries. “And I remember thinking how nice it would be if we could do the same thing, just to let people know that they’re not alone, we’re in this together and just a little bit of support, to ask for prayers and be there for each other through all this.”

Fries and fellow church member Rosalie Boots took their idea to the Parish council, and it was wholeheartedly accepted, with the decision to ring the bells every day at noon.

Maintenance manager Martin Rossler would do the duty every day at 12 p.m., ringing for about five minutes or so. On weekends, volunteers Dave Duncan and Marcel Gagnon would take over.

“There are so many things we can do to help each other that doesn’t cost anything other than your time,” Fries said. “It’s nice when people will give up their time, and those three people who rang those bells, it was a commitment and sometimes it was a special trip they had to make to the church, and it was really appreciated by everybody.”

Word started to filter back to the church from the public, and the support was nothing short of amazing.

“There were lots of good responses, and I was surprised how far away some people live from St. Joseph’s, they would say when they’re out in their yard they could hear them ringing at noon,” Fries said. “So I think the ripple effect was larger than we thought, we thought it was the general area around the church, but I think a lot of Moose Jaw benefited from this.”

The end of it all came on June 30. A few days earlier, Saskatchewan had announced that Phase 4.2 of the Re-Open Saskatchewan plan would take place through the first few weeks of July, marking the moment the immediate battle with COVID-19 began to move into its end stages.

And with that, with some semblance of normality returning, St. Joseph’s decided to let silence reign.

“When we started it, we didn’t have an end date, we hadn’t talked about when would be a good time to stop, and just because Saskatchewan is re-opening, we thought it was a good time,” Fries said. “But at the same time, we can grab that rope again and ring the bells.”

Next time you hear the peel of bells from St. Joseph’s, it’ll mark an important occasion.

“We’re not going to totally stop, though, whenever there’s a big event in the recovery from COVID, we’ll ring them again as a celebration,” Fries said.