For local musician Mike Beaudry, opening a recording studio in his home base of Tugaske, Sask. is a dream that has finally come true.

Beaudry started out imagining his studio as a personal project, someplace for him and partner Violet to record their own music and teach music lessons. But some pertinent industry connections meant Beaudry was able to purchase high-end equipment from a studio in Vancouver, and he started imagining something bigger.

“It was enough for a professional recording studio, [and] it was like, now I have what it takes to actually do this on a commercial level,” said Beaudry. “And I’ve done music my whole life, so I knew I could produce because I know what to listen for.”

With over 30 years of accolades as a guitarist under his hat, Beaudry is now turning part of his attention to producing music, using his own experience as an artist to help other musicians create.

In consultation with expert sound engineers, Beaudry’s studio is fully kitted out for both audio and video production. A wall of amps primed for all types of musicians lines one side of the live room, ranging from a stack of trustworthy Marshalls to Eddie Van Halen and Mesa Boogie amps perfect for heavy guitar riffs.

Then, you can add in top-of-the-line instruments including a custom guitar hand-built by local luthier Seth Freeman, a serious set of customizable mics, a mess of digital mixing tools, and Beaudry’s capabilities to double as both a session guitarist, bassist, and drummer in the live room and as a lead producer in the control room.

“The studio is capable of doing everything from the heaviest of metal all the way down to rap or country of any kind, or anything lighter. It's just equipped for everything and it's stocked digitally too,” said Beaudry. “If you want a Nashville-level of production, we can accomplish that.”

Sonar Records is also registered with Sask Music and the Saskatchewan Country Music Association, and Beaudry has taken all the certifications to be deemed a pro with the digital production tools. He has access to mixing and mastering consultants from other studios, primed to offer their expertise, and he’s interested in tackling all kinds of projects, so long as they have some passion.

“I’ve spent a lifetime collecting ultra high-end gear [and] I wanted to have a place that was equipped enough that you could experiment, combine genres, create your own style if you want,” said Beaudry. 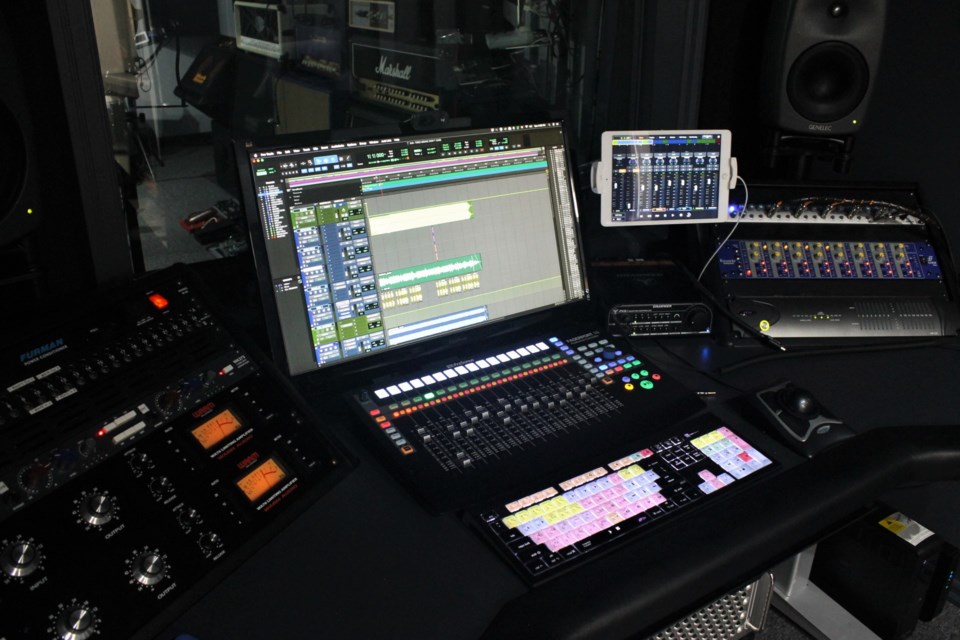 Beaudry's production panel is decked out to the nines, with automated faders and warm gear that replicated Abbey Road Studios, and more. / (photo by Larissa Kurz)

Sonar Records is a unique studio for plenty of reasons other than its impressive line-up of tech, ranging from its locale to its vision of who’ll take the mic in the live room.

To pair with his gleaming selection of top-quality equipment, Beaudry said his approach to laying down a track is very personal and flexible, which is something he feels artists will appreciate. He likes them right there in the sound booth, putting them in control of the creative process.

“To sit beside the board as an artist, in a lot of studios, and scrutinize what the mixing engineers are doing [doesn’t happen], but in this case, we want you to,” said Beaudry. “I’m all about progressing within the genre, making it better than it already is [and] being the trendsetter, and that’s what I would love to do."

One of the studio’s other interesting draws is that because of its location, visiting artists have not only the opportunity to enjoy the area’s quieter pace but also the chance to break that quiet with no complaints — something unusual at studios in busier centres.

“[It's] a place where people could come and go, and be very loud and not disturb anyone,” said Beaudry. “We can be here at two in the morning and crank a Marshall stack, because that’s where the beautiful tone is, and no one’s going to care.”

Beaudry has also always pictured the studio as catering to all levels of musicians in the live room, from five-piece bands to students recording a concert piece to people just looking to create a personal keepsake for themselves.

But the ultimate goal of Sonar Records is to put a spotlight on the province's music community, said Beaudry, and to build confidence in artists one high-quality project at a time.

“I want every artist to feel like, first of all, they are as good as they actually are, because we musicians are always hard on ourselves,” said Beaudry. “I want to elevate their confidence, [and] we want to help make Saskatchewan music better as a whole, too.”

To him, supporting local musicians has always been important and although Sonar Records is just getting started, he’s hoping that his studio will only elevate the incredible music scene thriving in Saskatchewan.

Looking back on the week that was for local athletes at the Canada Summer Games
Aug 14, 2022 5:01 PM