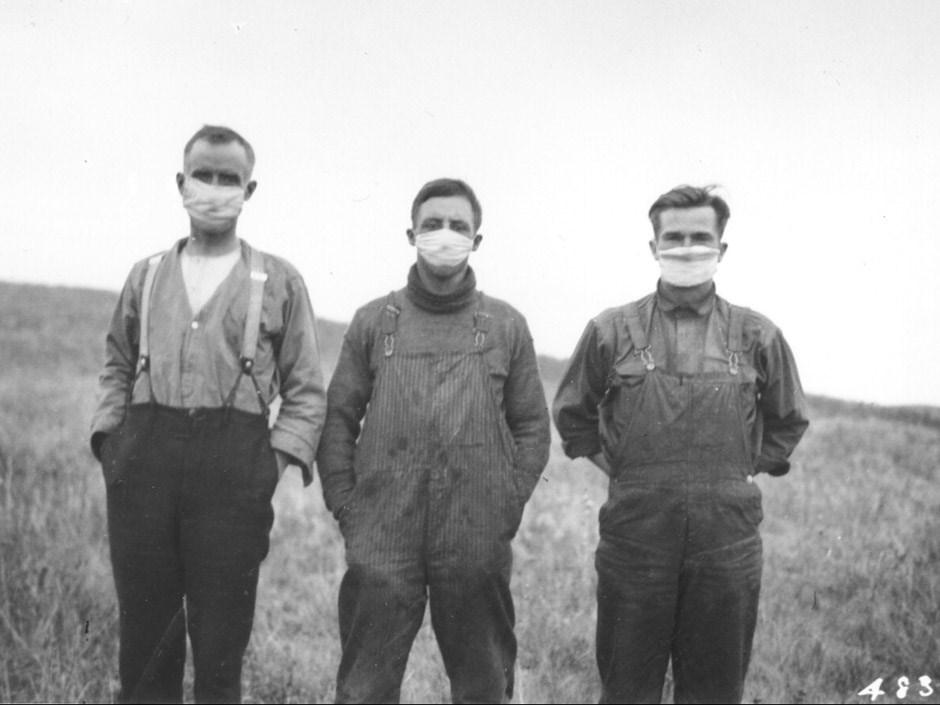 Photo of Alberta farmers featured on the cover of The Last Plague, written by Memorial University of Newfoundland historian Mark Humphries. Handout photo courtesy of Library and Archives Canada.

Spanish Flu emerged in the United States in late 1917. Its existence was covered up. Spanish Newspapers reported it – hence the name. Waves were 1917 – then early 1918 – and the fall and winter 1918-19 which is when it struck Moose Jaw.

There were 3 hospitals – the General, Providence and Ross (Military) – Moose Jaw and District Medical Officer of Health was Dr. Turnbull – he lived in what is now the Jones Funeral Home building.

Wednesday, October 2, 1918 – Spanish Flu was in Winnipeg – Dr. Turnbull said he and his staff were, “…  taking all necessary steps to deal with an outbreak should it occur.”

On October 8, 1918, a Saskatchewan Order-in-Council required mandatory reporting of people sick with Spanish Flu and that sick people “…must be isolated for a week or until all symptoms have disappeared.”

Tuesday, October 15, 1918 – First death in Moose Jaw and District – Robert John Brown who died at the General Hospital after only three days of sickness.

Thursday, October 17, 1918 – Number sick: 25 soldiers at Armoury – 32 at the General; 28 at the Providence hospital – Places of worship and entertainment closed – public meetings suspended – public places closed – schools closed – all for at least one week.

Saturday, October 19, 1918  –  56 new cases – Providence experiencing overcrowding – placing “couches and cots” in the corridors. The Moose Hotel on the South Hill converted to a hospital.

The pandemic settled in and was tolerated. Most of the deaths occurred in the same families. The pandemic continued to kill people through the winter.

By late spring 1919 it had left the Moose Jaw area.

The Spanish Flu pandemic killed 6.6 per cent of the population of Saskatchewan.

Odd Fact: mostly the young died. People 45 and older had a low mortality rate. This was probably because they had survived the “Russian Flu Pandemic of 1889-90” and had developed immunity (antibodies).