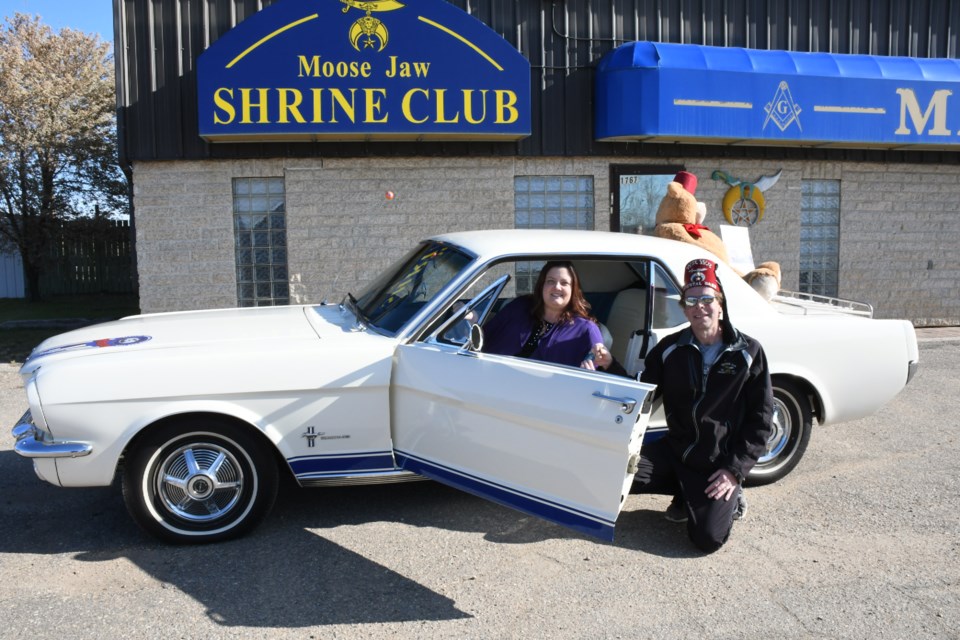 The Moose Jaw Shrine Club usually looks for interesting prizes to offer as part of its raffle contests, so its latest prize should certainly turn heads on the streets.

A rare 1964 Player’s special edition Mustang was parked in front of the organization’s clubhouse on Main Street North on Oct. 18, as the club presented the keys to lucky winner Connie Drew.

The vehicle is considered a special edition since an agreement was struck in the 1960s between the Ford Motor Company and the Player’s cigarette company to modify 15 Mustangs and given them a blue-and-white colour scheme similar to the cigarette company’s packages.

“It really shocked me (to win). I’m still shocked,” Drew said. “I’m sad I don’t know how to drive a standard.”

Drew was at a Moose Jaw Warriors game recently when the Shriners were selling raffle tickets. She purchased a ticket, she explained, since she wanted to support the organization and its efforts to help the community and sick children.

Now that the car is Drew’s, she isn’t sure what she plans to do with it yet. Her father had to drive it home for her after the Shriners handed over the keys.

The raffle generated $41,900 for the club, explained raffle chair Aaron Ruston. After factoring in the cost to buy the vehicle, the club netted $21,000. Every penny will go toward children’s causes, supporting Shriner’s hospitals, and travel costs for sick kids.

This particular Mustang has an interesting history, said Ruston. The vehicle is originally from Manitoba. The owner’s brother bought it and moved the car to Moosomin, where it was eventually left to deteriorate. Then someone else bought it, tore out everything inside the vehicle, and restored it from front to back. It was officially restored in 2012.

This 1964 Player’s special edition Mustang was one of the first 1,000 Mustangs ever built by Ford, Ruston continued. It accumulated 63,000 miles (100,800 kilometres) after leaving the factory, while it has since accumulated 5,300 miles (8,480 kilometres) since it was restored.

The vehicle has a 170-cubic-inch, 101 horsepower engine and is a three-speed manual. It has no power steering, which means the driver has to crank the wheel while turning.

Another raffle could be coming soon, Ruston added. The club is looking for another car to offer as a prize, such as a 1960s Camaro or even a Barracuda, so stay tuned.