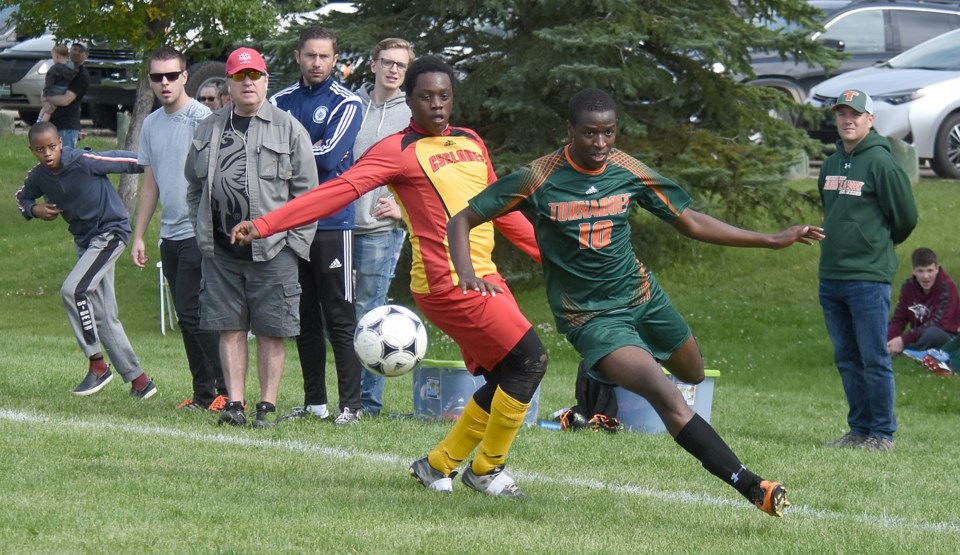 Peacock’s Tata Mugisha in action against Central’s Mohamed Ali during high school boys soccer action last season. Mugisha was one of six players Moose Jaw soccer players who signed with Portage College of the ACAC recently.
The Moose Jaw Soccer Association hasn’t seen a large number of players move on to post-secondary play in recent years, but that’s something they hope will change in the near future.

And the recent announcement that seven players from the local organization had signed with schools in the Alberta Colleges Athletic Conference for the coming campaign is just the first step.

Six of those – Tata Mugisha, Rhylan Tremblay, Mukire Kiroro, Laura Korthius, David Bayinagana and James Ruhinga – have signed on with the Portage College Voyageurs, while Swift Current’s Felix Danquah, who has trained with the MJSA the last few years, will join the Medicine Hat College Rattlers.

“That’s an incredible achievement for them,” said MJSA technical director Jordan Jeffery. “We were fortunate enough to attract a couple of different coaches from a couple of different colleges to run identification sessions with our players to see how many of them would fit their plans for the future, and between the between the two camps we ran for the ACAC teams, 17 players were offered scholarships.”

While some players chose to stay closer to home, the ones who jumped at the opportunity will have a chance to play high-level soccer in one of the most competitive college leagues in the country. The Portage crew might end up a long way from home in Lac La Biche – located a two and a half hour drive north east of Edmonton – but the familiar faces will certainly help with that adjustment.

“It’s quite a long way away, but with all of them going in together and there will be that culture and feel of knowing some people there and not being on their own, and hopefully that helps them make a quick adjustment,” Jeffery said.

Interestingly enough, a handful of the players are well outside of their high school years and were actually taking courses at the University of Regina, which doesn’t have a men’s soccer program to speak of. Tremblay, for example, will be 20 when he suits up for the Voyageurs, while Ruhinga, Kiroro and Bayinagana will be in their 20s.

“So it’s never too late, work hard and you never know what can happen,” Jeffery said. “Even if you are older, you can come and play in the adult program and chitchat with me about your goals and we can see if we can match-up and put you in front of somebody… That’s a crucial message to let people know, that even though you took a year off, it’s not too late, if you can play they’ll look at you. If you have the talent, the work ethic and the desire, it can still happen, it doesn’t have to be right out of high school.” Swift Current’s Felix Danquah battles with a Peacock defender during the Moose Jaw boys league final this past season. The high-scoring Danquah trained with Moose Jaw the last few seasons and signed with Medicine Hat of the ACAC recently.
Tremblay and Danquah are models of what work ethic and desire can create.

For Tremblay, the return to the pitch will be almost miraculous after he suffered a catastrophic knee injury in February of 2019. Hard work, rehab and a simple will to get back in the game will have paid off once he puts on the Voyageurs jersey for the first time.

“I don’t think I’ve seen someone come back that quick from something that severe,” lauded Jeffery, who also pointed out Tremblay’s dedication as a coach and referee for MJSA. “As soon as he had the surgery we wanted to get back on the field and get things moving again, so all the effort he’s put in has ended up with a scholarship.”

Danquah, meanwhile, decided to travel into Moose Jaw in order to train during the winter. One of the highest scoring players in Moose Jaw high school league history, he made it his business to show up at YaraCentre regardless of what it might take.

“There were some nights where the weather would be awful and we’d be like ‘yeah I don’t think we’re going to see Felix tonight’ and he shows up five minutes later,” laughed Jeffery. “He was dedicated and he’s being rewarded for it.”

The key now is to keep the college train rolling, something Jeffery plans work on by hosting more coaches for identification camps throughout the year. And if that helps keep kids playing soccer well into adulthood and using the sport in order to gain an education, misson accomplished.

“I think for a long time, players were dropping out because they didn’t think there was a pathway beyond high school,” Jeffery said. “A lot of players have that goal of becoming a professional and that’s great, but at the very least we want to make sure at our end that we help put you into a program that’s going to lead to a career for you if being a professional doesn’t work out.

“That’s where you can see the hard work pay off, the value from the time and effort and money you put into it as a youth player.”