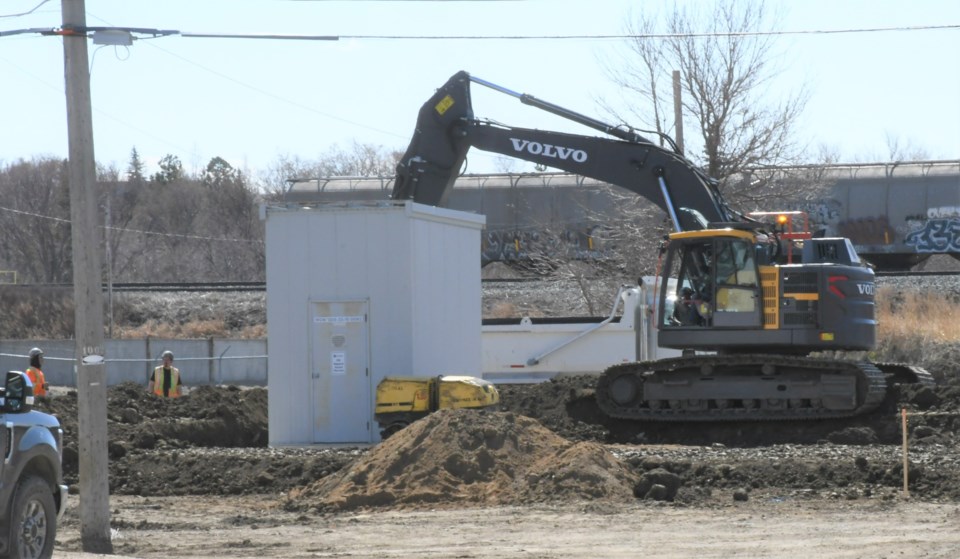 Contractors for SaskWater construct a berm near a geothermal well at a site on Manitoba Street East. Photo by Jason G. Antonio

Contractors for SaskWater have returned to the site that contains the lone geothermal well in Moose Jaw to complete some additional work that was begun last fall.

Crews with heavy equipment began working on the Manitoba Street East site on April 26. As a frame of reference, the work is occurring beside the former National Light and Power power station, which is the red brick building motorists pass as they head toward Regina.

The construction is a continuation of the rehabilitation work that began in September and includes the construction of a containment berm around the well building, explained Courtney Mihalicz, manager of communications for SaskWater. The Crown corporation had to wait until the ground thawed before it could proceed with this upgrade.

SaskWater is expected to complete the work by April 30.

The City of Moose Jaw originally owned the two geothermal wells on site, while the Crown corporation drew water from the wells to feed the Temple Gardens Mineral Spa. However, the municipality gave the wells to SaskWater — and charged it less for water rates — as part of a joint project that saw the Crown corporation rehabilitate the infrastructure and pay for most of the work.

The wells had not been upgraded in over 20 years, so the provincial government determined the structures needed to be refurbished due to age and high-pressure operations. An analysis and assessment were performed to determine what needed to be done for the rehabilitation. The work was later completed by November.

SaskWater eventually turned the injection well — which was never commissioned — into the main well and decommissioned the supply well. The cost to the City of Moose Jaw for this project was $133,087 and for SaskWater was $368,632.