Northern Ontario, Nova Scotia, B.C. all pick up wins out of opening draw
0
Feb 15, 2020 7:27 PM By: Randy Palmer
Previous Next
1 / 1 Team Saskatchewan shares a happy moment late in Saturday's contest. (Randy Palmer photos)
Expand
Previous Next
Robyn Silvernagle is off to the exact start she was hoping for at the 2020 Scotties Tournament of Hearts.

Silvernagle and her Team Saskatchewan rink of third Stefanie Lawton, second Kara Thevenot and lead Jessie Hunkin picked up a 6-4 win over New Brunswick’s Andrea Crawford in the opening draw of the tournament Saturday afternoon at Mosaic Place.

“It was a really great start, we just had a little oopsie in the eighth end when there were a couple missed shots and they made some great shots, overall it was a really good game,” Silvernagle said. “It’s huge, just get your feet under you, get the nerves out, and once you get playing you kind of forget about the crowd. So we’re going to get into our groove and keep it going.”

Silvernagle picked up one in the fourth and stole points the next two ends, including a pair in the fifth and one in six to build a 4-1 lead. Crawford and her rink of third Jennifer Armstrong, second Jillian Keough and Katie Forward didn’t go quietly, though, with one in the seventh and the aforementioned ‘oopsie’ in the eighth leading to a tie game heading into the ninth.

There, Silvernagle was able to make a runback to pick up her deuce before running Crawford out of rocks in the final end.

The Mosaic Place crowd were behind Team Saskatchewan from the first rock, and the support was appreciated.

“Oh, it’s fun,” Silvernagle said enthusiastically. “Especially making that runback or even in nine when I made that one for two, it was like ‘whoo, just got goosebumps’ so it’s really awesome.”

Saskatchewan is back in action during Draw 4 at 1:30 p.m. Sunday against Team Canada’s Chelsea Carey before taking on Nunavut’s Lori Eddy in the 6:30 p.m. draw. 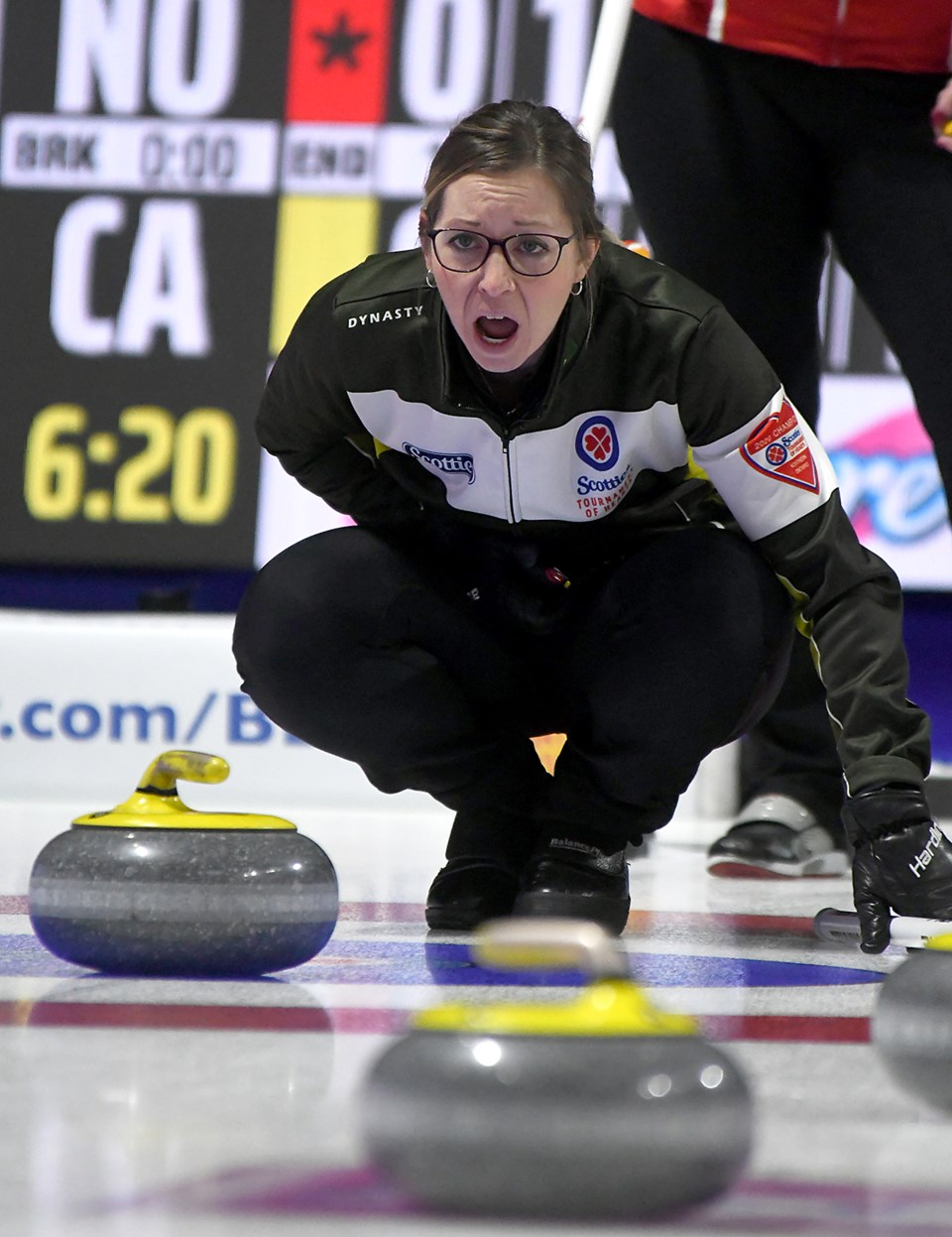 McCarville and Northern Ontario found themselves dealing with one of the pre-tournament favourites in her first game but was able come away with a huge 8-3 win over Carey and Team Canada.

McCarville and her rink of third Kendra Lilly, second Ashley Sippala and lead Jen Gates carried a 3-2 lead out of the fifth end but took control from there, with a three-spot in the eighth and steal in the ninth bringing the game to an early end.

Carey, third Sarah Wilkes, second Dana Ferguson and lead Rachel Brown were plagued by picks throughout the contest – icemaker Dave Merklinger even checked out a drip spot on the edge of sheet A early in the game – but the veteran skip refused to blame the conditions.

“It was a little straight early and then it started to curl a little bit more later, but it’s not an issue, or not that we’ve seen so far,” Carey said. “We just struggled we had a couple of picks that cost us early that cost us a deuce early and then a steal the next end. Then we missed some opportunities, and when they had an opportunity they made it and we couldn’t quite capitalize on. So we have to come out next game a little bit sharper and keep learning the ice and make a couple more shots.” 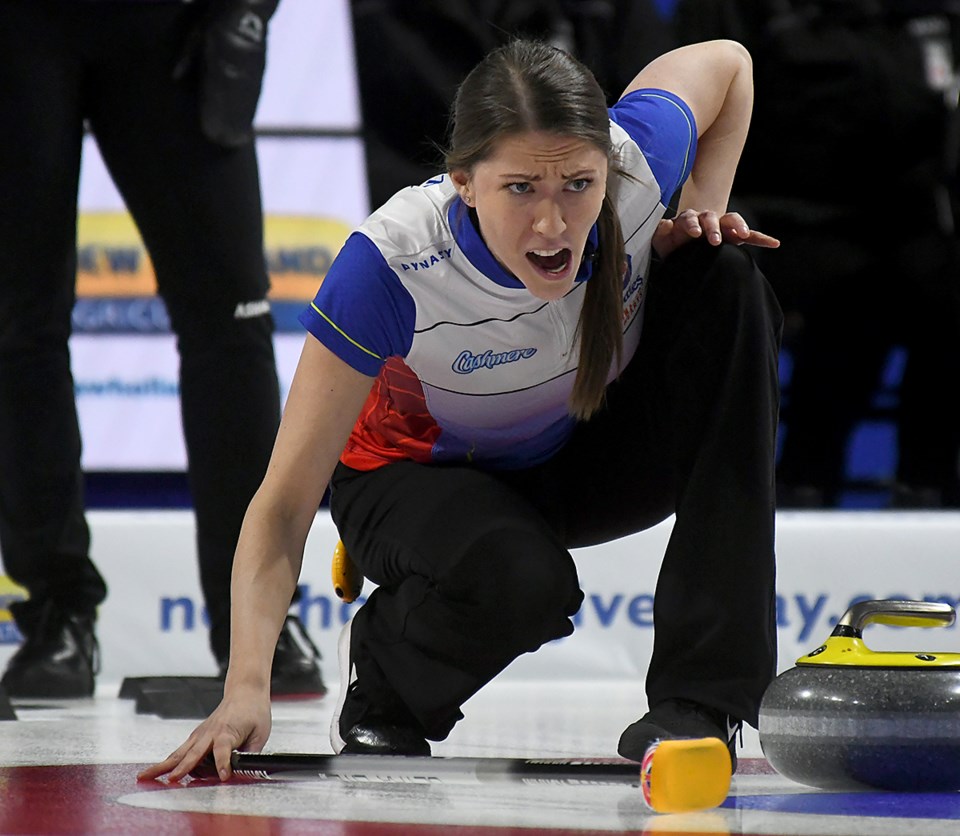 B.C.'s Erin Pincott.
Team B.C.’s Corryn Brown has a pair of Canadian junior curling championships to her name, and now she has her first victory at the Scotties Tournament of Hearts.

Brown ad her rink of third Erin Pincott, second Dezaray Hawes and lead Ashley Klymchuk didn’t have an easy time of it, though, in taking a 7-5 victory over P.E.I.’s Suzanne Birt.

“It’s always important to get that first win, it makes you feel like you can compete here and stuff,” Brown said. “It’s nice to finally get that one under our belts, we have our first win at the Scotties so we’re really happy with that.”

Birt, third Marie Christianson, second Meaghan Hughes and lead Michelle McQuaid found themselves tied 4-4 through seven ends, but Brown would pick up a single in the eighth and add a crucial, game-changing steal of two in nine to take a 7-4 lead. Birt was able to get one back in 10 but would get no closer.

Having a chance to win her first game in front of a raucous Scotties opening draw crowd was an added bonus for the 24-year-old skip.

“It was pretty incredible going out there, we’re really excited we kept the momentum going throughout that game and were able to get the win,” Brown said.

B.C. is back on the ice against Northwest Territories’ Kerry Galusha at 1:30 p.m. Saturday, followed by Jennifer Jones’ Wild Card squad in the evening draw. 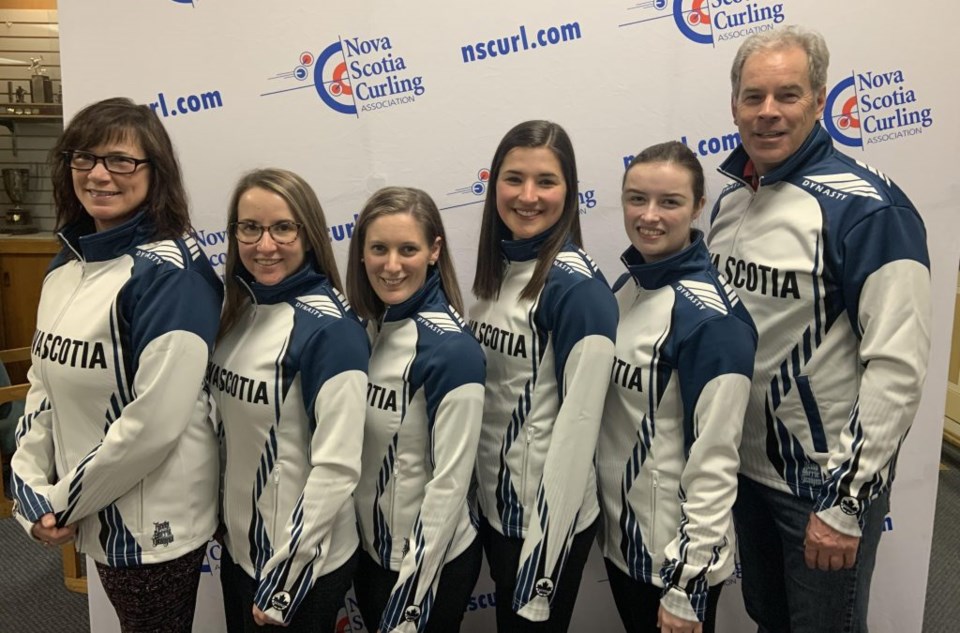 Team Nova Scotia
Of all the skips at the 2020 Scotties Tournament of Hearts, Nova Scotia’s Mary-Anne Arsenault likely has the best handle on what it’s like to play at the highest level possible.

When you’ve been at it since 1993 and played with Colleen Jones for a decade, well, you’re going to do your share of winning.

Arsenault and her rink of third Christina Black, second Jennifer Baxter and lead Emma Logan did just that on Saturday in the opening draw against Northwest Territories Kerry Galusha – herself a veteran of 14 Scotties – building a 5-1 lead through five ends, extending it 8-2 through seven and holding a late charge to take an 8-6 win.

“I think it was a kind of typical first game, everyone is trying to get their legs under them, finding their draw weight and how it curls, what you can’t do and all that stuff,” Arsenault said. “I think we learned a lot about that game and we were lucky enough to have the kind of lead where we could give up a couple points at the end.”

Knowing almost exactly what to expect regardless of the situation is something Arsenault hopes will work to her advantage going forward.

“I think it helps for sure,” Arsenault said. “You can’t really describe [arena ice] until you play it to really know the difference, so I think having experience at this is kind of level is key… we understand there are teams who play this kind of surface weekend after weekend and they have an advantage on us there, but as long as we start okay we’ll be in the mix.”

Galusha, who throws second stones, fourth Jo-Ann Rizzo, third Sarah Koltun and lead Shona Barbour take on B.C. in the afternoon in their lone draw of the day Saturday, while Nova Scotia will face P.E.I. in their only contest.