Premier Scott Moe said today that Saskatchewan is expected to begin re-opening as early as the end of May, based on vaccination rates
May 4, 2021 5:20 PM By: Larissa Kurz 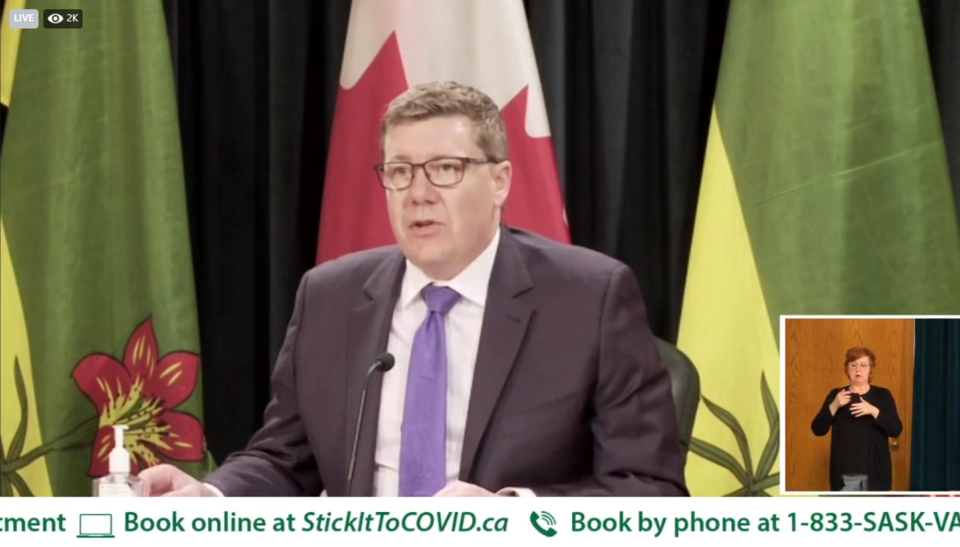 Premier Scott Moe made the announcement that Saskatchewan may begin it's re-opening plan as early as the end of May.(screenshot)

The provincial government has released details of Saskatchewan’s new re-opening plan, which Premier Scott Moe said will be implemented in three steps and gradually lift public health restrictions for residents possibly by the end of July.

“I know that some will say we are moving too slow on this re-opening roadmap while others will say we’re moving too fast,” said Premier Scott Moe. “And to those who’d like us to go faster, I would say that we need to be cautious.”

The plan steps are reliant on vaccination thresholds, vaccine availability and timing, said a press release from the Saskatchewan government. A three-week bumper period has been worked into each step to ensure vaccine immunity is in play.

Step One requires 70 per cent of individuals over the age of 40 to have received their first dose of COVID-19 vaccine at least three weeks prior, and vaccine eligibility is open to all adults 18 and over provincewide.

Moe anticipates this step will be reached by the last week of May, if the current rate of vaccination continues at the pace it is on. Currently, the province has seen 65 per cent of residents over 40 vaccinated.

“The good news is that the overwhelming majority of Saskatchewan people most certainly are making the right choice. They’re getting vaccinated when it's their turn, and very shortly everyone else will have that chance,” said Moe. “And when that happens, we can start to ease the restrictions in our communities, we can start to get back to normal, and we can have a great Saskatchewan summer.” 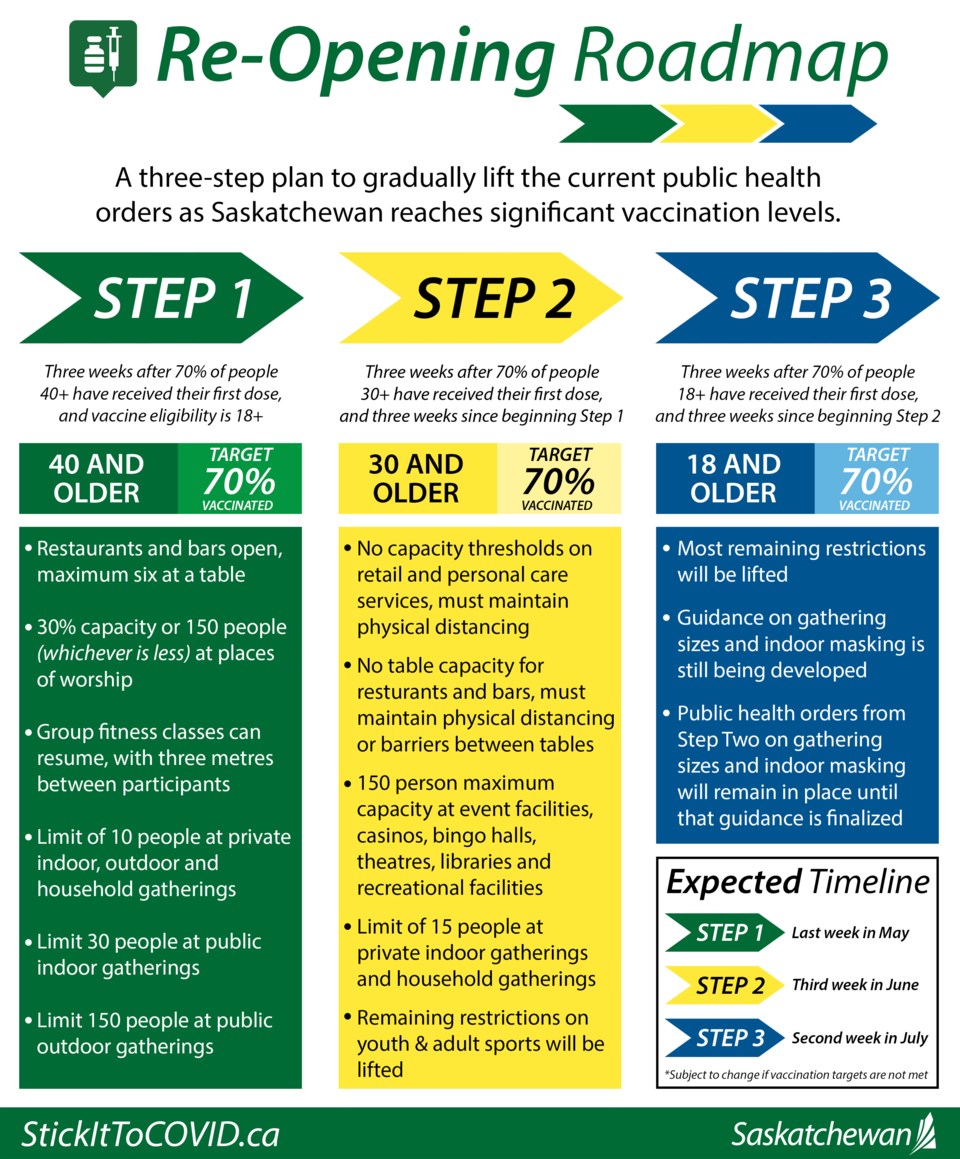 (supplied by the Government of Saskatchewan)
When Step One begins, several public measures will be eased in a number of areas. The mandatory masking order will remain, but private indoor and outdoor gatherings will be allowed 10 people, including within the household.

Public indoor gatherings will be increased to a max of 30 people, and public outdoor gatherings to 150 people. Places of worship will again be allowed to welcome 30 per cent capacity or 150 people, whichever is less.

Restaurants will be opened with a max of six individuals to a table with distance maintained between tables, and group fitness classes may resume with distancing in place. Restrictions for retail spaces, educational facilities, event facilities and public spaces like libraries and museums will stay the same.

Step Two will require 70 per cent of people aged 30 and above to receive their first dose and for at least three weeks to have passed since Step One, and it is expected to be reached by the end of June.

During this step of the plan, capacity thresholds on retail spaces and restaurants will be lifted entirely, with physical distancing requirements still in place.

Restrictions on youth and adult sports will be lifted, but requirements for gyms and fitness facilities will remain the same.

Step Three must see 70 per cent of adults aged 18 and above receive their first dose and at least three weeks to have passed since Step Two, expected to be achieved by early to mid-July.

The final step will see most of the remaining restrictions lifted, although details on masking and gathering sizes will be determined closer to the date, according to how the previous steps go.

Moe said he is anticipating the province to exceed these set vaccination thresholds when Step One begins, as the vaccination plan continues.

The province is expecting to receive more regular vaccine shipments through May and June, allowing for the rate of vaccination to continue after being slowed recently due to supply constraints.

Public health confirmed that second doses are set to be offered to residents following the completion of first doses in all adults in the province.

For full details on the re-opening plan, visit saskatchewan.ca/COVID19.