The condo complex's parking lot light is so bright that it illuminates one condo unit more than the interior lighting
0
Sep 16, 2019 5:05 PM By: Jason G. Antonio 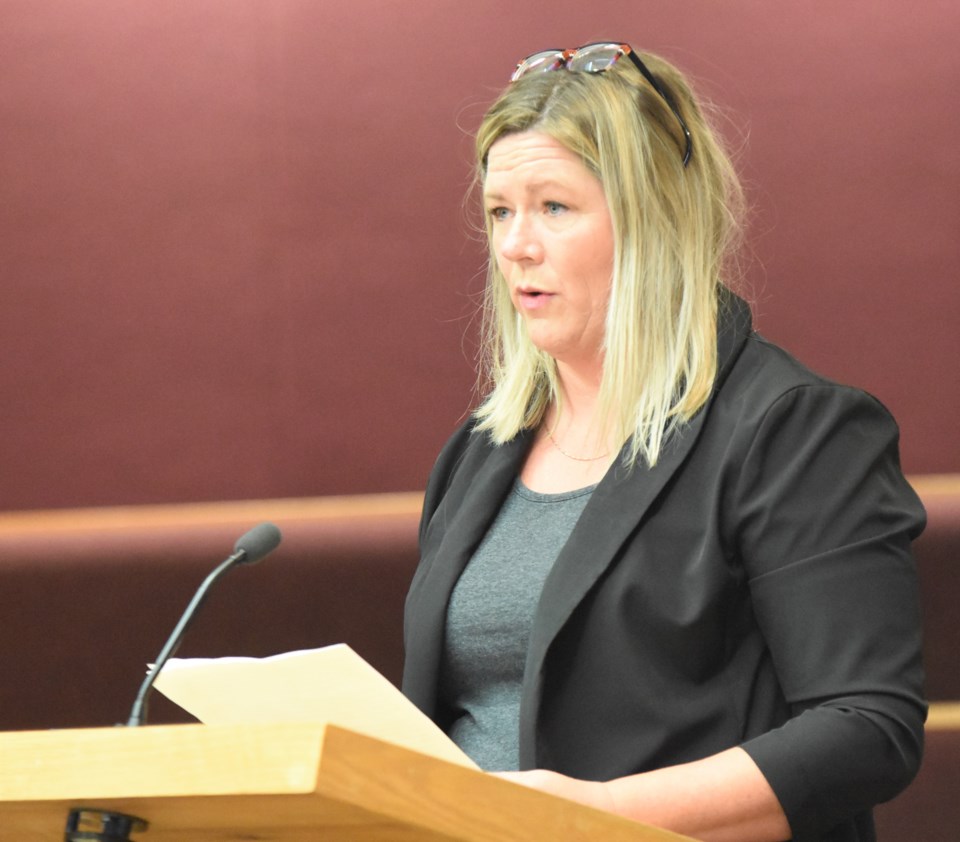 Condo owner Kathi Hagman speaks to city council during its Sept. 9 regular meeting about a blinding parking lot light shining into her condo unit. She wants a municipal bylaw enforced so the condo board dims the light or covers it. Photo by Jason G. Antonio

All Kathi Hagman wants to do is live in her condominium in peace, but for more than a year a nearby light “that you could possibly see from NASA” has been shining into her bedroom.

Hagman attempted to resolve the issue by contacting members of her Alpine Village condo board but realized no communication with them would fix the problem. So, she searched through municipal bylaws hoping to find a solution.

She found a possible solution under the Property Maintenance and Nuisance Bylaws, a part of which states: “No owner of a property shall cause or allow any light fixture attached to that property or illuminated signage to shine directly into the living or sleeping areas of an adjacent dwelling house or cause a nuisance to an adjacent property.”

She complained to the bylaw enforcement officer in February but was told the light — which was installed around Oct. 31, 2018 — had to be shining directly at her property.

“No problem, I thought, it was and is so bright (that) I was concerned we would have planes landing in the parking lot,” Hagman told city council during its Sept. 9 regular meeting, in an attempt to resolve the issue.

The bylaw officer called her two weeks later and said there was nothing the municipality could do since the light wasn’t shining directly at her property, but was shining “downward.” Therefore, there was no contravention of the municipal bylaw.

Hagman objected to that, telling council that the municipality won’t enforce the bylaw since it sees this property — a condominium building — as a whole and not units owned by 23 individual taxpayers.

With no support from the bylaw office, Hagman spoke with Mayor Fraser Tolmie and later city manager Jim Puffalt, the latter saying he would visit the property to see the light — when it was dark outside.

“I was told that a solution would be to ‘close my blinds,’” Hagman told council. “I was flabbergasted by the fact that instead of helping me in any way, I was just given — in my opinion — that ridiculous ‘solution.’”

Solutions that could work, in Hagman’s mind, include relocating the light, covering it so it doesn’t shine into anyone’s condo, or dimming it to its previous levels.

Hagman wanted to know why there are bylaws if they aren’t enforced. She thought this was a light “that you could possibly see from NASA shining (into) my bedroom.”

“Not enforcing this bylaw makes absolutely no sense to me,” Hagman remarked, especially when bylaws are enforced for untidy yards and noise complaints.

“I truly feel like this has been going on unfairly for far too long … ,” she added. “I am asking … that this bylaw be enforced, so I can start to enjoy my home again.”

Council discussed the issue afterward and agreed to take action.