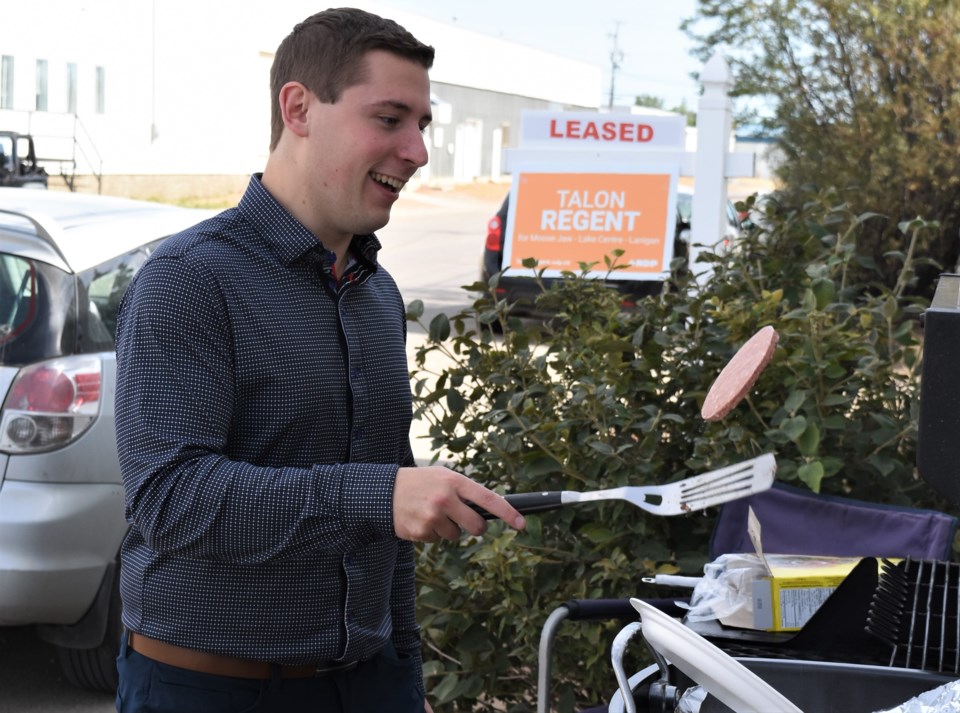 Talon Regent flips a burger (photo by Randy Palmer)
It’s been hard to miss Talon Regent’s new NDP-mobile if you’ve been out-and-about on the streets of Moose Jaw.

That’s one sure sign that a federal election is on the way.

Saturday, the local New Democratic Party representative officially took the next step in preparing for the looming trip to the polls by joining with supporters to open their new Moose Jaw-Lake Centre-Lanigan office, located at 787 Fairford Street West.

It’s there that Regent is looking forward to meeting his potential constituents, exchanging ideas and listening to whatever concerns voters might have.

“This is a welcome space for whoever might want to come in, whether they’re a dedicated NDP member, undecided or maybe they’re even they support another party and want to challenge me on some of the policies I’m holding,” Regent said in between flipping burgers during a free barbecue in the early afternoon. “I welcome people to come and say, ‘well, Talon, why do you think a minimum wage increase will work, isn’t that just going to increase the cost of everything?’ And I can sit them down and say ‘no that’s not how it works, this is how a minimum wage increase is going to help Canadians’

“Things are going fantastic, everything is coming together really nicely, and we’re looking forward to the campaign.”

There has been much speculation as to when the government will officially drop the election writ, with some expecting it to come as soon as early this week. Regent has already been on the streets getting out his message, but things will ramp up in earnest once things become official.

“Nothing in particular changes, except on the back end with some of the finances, but on the front end, people pay a lot more attention once the writ is dropped,” he said. “So right now, when I’m out doorknocking, people are going ‘oh, we have an election coming up, I didn’t even realize.’ I welcome that, so I can let them know well in advance that they have to clear an hour of time in their schedule to go out and vote, and I can help them understand the NDP’s policies before they’re influenced by other parties.”

Regent has been able to turn his longtime presence in the community into some positive buzz in the early going of the campaign, with the 28-year-old’s work as a local lawyer and community volunteer working to his advantage.

“It’s been way better than I expected,’ he said. “A lot of people know who I am within the community, they know that I’m working with the Moose Jaw seniors association to help them renegotiate their lease with Timothy Eatons, I’ve worked on a few other high-profiles in the community, helping charities and non-profits.

“So people recognize me when I come to the door, and people are saying ‘Talon, I had no idea you were interested in this, but you’re perfect for the job, do you want a donation?’ And of course I’m saying ‘yes please,’” Regent added with a laugh. “And there have been individuals who aren’t necessarily NDP supporters who have said ‘I won’t vote NDP, but I will vote Talon Regent’ and that really means a lot to me.”

One message Regent has carried from the beginning of his campaign is voting the right way – that being with the party most aligned with your beliefs regardless of affiliation, with the goal of sending a message to representative politicians.

“It doesn’t matter who can win, you have to send a message to who does win that these are the demographics in our riding… I am looking to do politics differently, where I represent all the constituents in my riding, not just the ones who vote for me.”

Team British Columbia showing starch as one of Scotties' rookie teams
Feb 19, 2020 8:00 AM