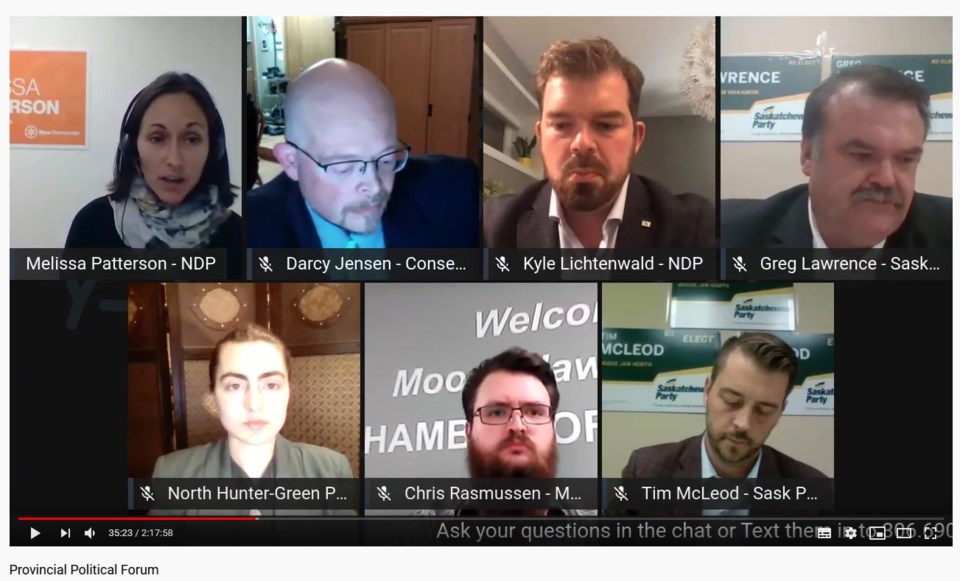 The chamber gave the candidates three questions in advance, including how their parties would grow the tech sector, address relational problems with the federal government, and support small businesses in a post-pandemic world.

The Moose Jaw Express will have a separate article on the candidates’ answers to the chamber questions.

While the PC Party believes people should wear masks when distancing is not possible or when in crowds, it will not make masks mandatory through policies or law, said Jensen.

The Sask. Party’s message on masks has been consistent throughout the pandemic, especially since it has taken the provincial chief medical health officer’s advice, said McLeod. This has worked since the province’s case numbers are low and residents have helped “flattened the curve.”

The Green Party would make masks mandatory and ensure the Saskatchewan Health Plan covers the cost of vaccines, said Hunter.

Lichtenwald has been wearing a mask in public since March, he said, whereas Sask. Party leader Scott Moe hasn’t taken this seriously since he has not always physically distanced or worn a mask.

“As we move closer to a second wave, we want to know that people are experts in their field. Dr. Ryan Meili is a pretty great choice … ,” said Patterson.

Cuts to grants in lieu (GIL)

Reinstating the grants-in-lieu program is not an issue for Moose Jaw North voters, said McLeod. Instead, he has heard from voters — including traditional NDP supporters — that Moe has done “a fantastic job” during the pandemic.

The Green Party would create a citizens’ assembly to discuss this issue, said Hunter. The party wants to ensure everyone can pay for their shelter, so it would be concerned if property taxes prohibit voters’ ability to live.

The Sask. Party replaced grants in lieu with municipal revenue sharing and dedicated one per cent of the PST to municipalities, thereby providing steady yearly grants, said Lawrence.

While taxes in Moose Jaw have gone down, taxes on water and sewer have increased because the city lost GIL funding, said Lichtenwald. Furthermore, the Sask. Party reduced municipal revenue sharing to 0.75 per cent of PST and took funding from photo radar cameras that should have gone to city coffers.

The PC Party would canvass residents to determine whether they want GIL reinstated and whether it’s worth investing the time and energy, said Jensen.

The Green Party would support a guaranteed basic income, while it would ensure everyone has access to universal health care, said Hunter. It would ensure there are “equity standard points,” so everyone can participate in society, while taxpayers’ money would be pooled and spent on projects that benefit everyone.

The Sask. Party plans to improve services for deaf/blind residents, while it has programs such as the Saskatchewan Assured Income for Disability (SAID) income support program to help people with significant and enduring disabilities, said Lawrence.

The NDP would develop a disability strategy to ensure everyone can reach their full potential, said Lichtenwald. This includes creating a $5 million poverty reduction strategy and housing plan. It would also provide more resources for people to remain longer in their homes and ensure more home-care nurses are available.

The Sask. Party introduced a sound disability strategy in 2015, while last year it introduced legislation to reduce accessibility barriers by reviewing the design of public spaces, communications and service standards, said McLeod. It also plans to contribute $220 million in the 2020-21 budget to community-based organizations.

The Sask. Party introduced in March the Pillars for Life suicide prevention program, while it has invested $60 million in mental health and addictions supports during the last two years and recently opened 14 new mental health beds in Estevan, said Lawrence.

Lichtenwald, however, disagreed with the Sask. Party’s approach.

“What is troubling is the Sask. Party is sticking to its Pillars for Life plan, but 44 MLAs voted against (the NDP’s) suicide prevention legislation act. That doesn’t compute for me,” he said.

The NDP would open mental health emergency rooms in Regina, Saskatoon and Prince Albert, would develop a crystal meth and opioid plan, and invest $5 million in a suicide prevention plan.

“It is unbelievable that this government wouldn’t overcome partisan differences for a necessary step like this … ,” echoed Patterson. “We need a government that actually takes this seriously.”

The PC Party would build two northern mental health hubs in collaboration with Aboriginal and Metis communities, said Jensen. That could help alleviate suicides in the north.

“It has been an ongoing problem and the Sask. Party has not done anything to fix the problem,” he added. “I cannot believe they voted down what the NDP was introducing.”

McLeod pointed out the Sask. Party has dedicated $213 million to Aboriginal communities for mental health. It has also allocated money for remote communications technology, enhanced dental programs, and kidney health and dialysis initiatives.

Experts have said that the program is inadequate, while the Sask. Party has attempted to bury this important issue, said Hunter. The Green Party would make this a high priority by ensuring there is health care for everyone.

The NDP would ensure community and provincial workers are used to build the SaskPower natural gas plant and joint-use school, said Lichtenwald. He would similarly encourage the creation of a distillery, brewery and solar farm here.

The NDP would also create a Sask. First procurement policy, while it would also increase minimum wage to $15 per hour, said Patterson, adding the status quo under Moe isn’t working.

The PC Party would scrap the New West Partnership Trade Agreement since it has hurt Saskatchewan jobs in construction and the service industry, said Jensen. He would also promote Moose Jaw as a welcoming community that feels like home.

“This is one of the most beautiful cities in the province. We have to get industries back to Saskatchewan (and Moose Jaw),” he added.

While the NDP has accused the Sask. Party of sending jobs away, there is no company here that can build a generator or turbine, said Lawrence. Those have to be imported from overseas and outside experts have to put them together.

When SaskPower builds its natural gas plant here, Moose Jaw businesses could see nearly $450 million in economic spinoffs just as Swift Current did, he added. The same type of investment could happen when the new joint-use school is built.

There needs to be “a fair and just transition” away from oil and gas, but the Green Party wouldn’t leave oil and gas workers unemployed and would use them to build environmentally-friendly products, said Hunter. The party also wants to reduce emissions by 60 per cent within four years and 100 per cent in 10 years, which would generate many green-focused jobs.

“It is mission possible,” she added. “That … may seem like a utopia, but that is exactly what we plan to do.”