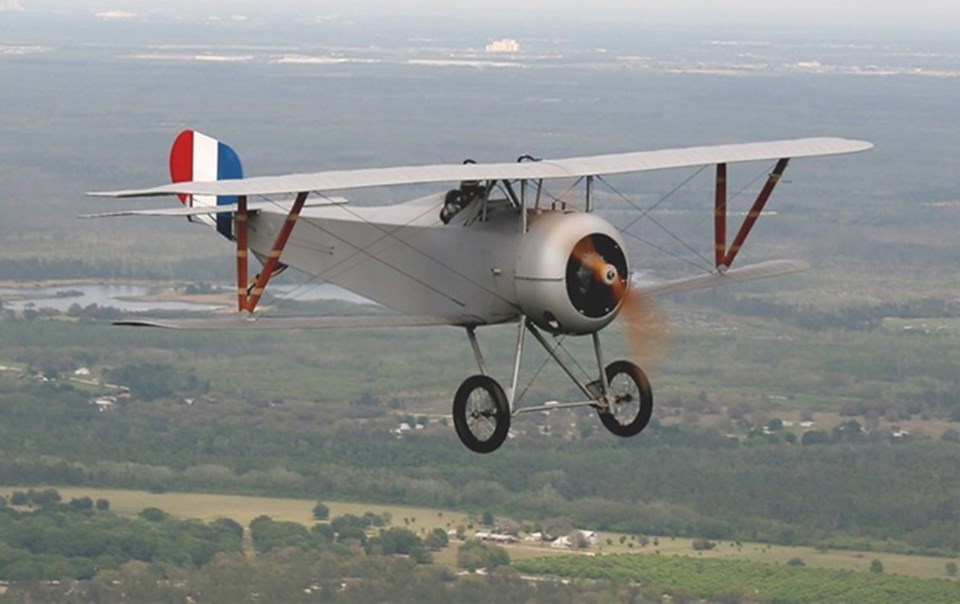 A World War I-vintage Nieuport 17 biplane in flight, similar to the aircraft Peacock Collegiate students will be building in the coming years. FantasyofFlight.com
Back when the Nieuport 17 biplane first came into commission in the early years of the First World War, it took the engineering skill and knowledge of the top aviation experts in the world, scientists on the cutting edge of technology and ability, to put the first craft of it’s kind in the air.

Now, over the next two years, students at Peacock Collegiate will attempt to do the same.

The local high school is putting the finishing touches on their Aviation Studies program, which will develop and lead into the school actually constructing — and eventually flying — their own biplane.

It’s an ambitious undertaking and a perfect fit for the school, says principal Dustin Swanson, given their in-depth practical applied arts program that includes mechanics, automotive, design, fabrication and beyond.

“We’ve always believed it would be a wonderful challenge for us to strike out and try and build a flying airplane in the spirit of engineering and our school’s passion for the practical and applied arts,” Swanson said, adding that an innovation grant from Prairie South School Division helped move the project into reality.

The Nieuport 17 is a good choice for such a project, in part due to its simplicity as an aircraft, but also due to the history of its pilots — including one of Canada’s most famous in World War I ace Billy Bishop.

“We really like the real-life application and challenge this presents,” Swanson said. “We like to be able to do something that seems beyond our abilities and to be able to stretch to achieve that target, and that’s an important thing to model for our kids. So we’re excited about that.

“Secondly, the historical connection to the Canadian Air Force, the British Air Force and Billy Bishop. So it made sense to be looking at an aircraft that was really significant in air combat and is relatively simple to be able to construct.”

The project will begin with the initial Aviation Studies course launching later this year for Grade 11 and 12 students and is expected to cover the next two-and-a-half years, with the first flight in the summer of 2023 if everything goes according to plan.

“Normally this would take about two years, but we know it will take slightly longer because the COVID impact has been significant when it comes to doing things that are part of the programming,” Swanson said.

The first classes will touch on aspect of piloting, basics of flight and basic aircraft construction techniques. Students in the new school year will join the program next fall, with some of the hands-on components of building the plane beginning around that time.

The whole project won’t just be an insular event for Peacock. The plan is to bring in outside experts to help with the education aspects, drawing on the vast reservoir of knowledge from Moose Jaw aviation talent.

“Our hope is we’ll be working with Transport Canada and folks with experimental aircraft construction,” Swanson said. “There’s a large local aviation community obviously here in Moose Jaw and once we get through the pandemic we’ll certainly be reaching out more with our partners and into the community to be involved in it. There’s some expertise we’ll need to draw in from the community from those who have that, with the eventual goal for the plane to fly.

"Then we’ll see, whether it becomes a prop somewhere in a museum or it becomes something we sell or display, we don’t know.”

The project won’t just involve the applied arts programs either -- plans are already coming into place to involve Peacock history and social studies programs, looking at the past of the aircraft and aviation in Moose Jaw as well as how the world looked in the time it was built, for example.

“So it won’t just be the aviation students, you’ll see it permeate through the school,” Swanson said.

“We know it’s going to be a large-scale and engaging project. There have been other schools in the world who have constructed airplanes, so it’s not something that hasn’t been done before, but it’s certainly new for our neck of the woods and we’re happy to take the challenge.”