"You wouldn't find a picture of Alexandria School unless you had one yourself, so I think it's kind of a cool thing to see those pictures and paintings done over the years," said A.E. Peacock Collegiate's principal Dustin Swanson, about the collection
0
Oct 20, 2019 3:45 PM By: Larissa Kurz
Previous Next
1 / 1 The display cases are home to memorabilia from various sports teams over the years.
Expand
Previous Next

The Archive Room at A.E. Peacock Collegiate is home to some incredible artifacts, some of which date back 100 years and all of which tell the history of Moose Jaw schools.

Principal Dustin Swanson detailed the impressive list of items currently housed in the display, ranging from antique desks and old readers, to sweaters from the 1940s, to sports trophies and team photos.

A whole cabinet houses photos from all the schools in the city, past and present, dating from the 1890s up to the 1980s. Binders full of photos include class pictures, snapshots of building construction and demolition days, and tons of other moments in time.

Teaching supplies, some of which are no longer used in schools today, are also on display — things like relief maps from the 1910s and 20s, that are partially three-dimensional in their topography.

“There's lots of kinds of items like that, lots of school items that may conjure up some memories — maybe good or bad, I don't know,” laughed Swanson.

The collection even features a gold-plated cane that was given to William Grayson for his time on the school board, as well as the Order of Canada given to A.E. Peacock in 1977 and a signed letter from Winston Churchill acknowledging the statue of him built outside of A.E. Peacock Collegiate.

Prairie South School Division has been collecting the memorabilia for about 20 years, previously housing it in a temporary classroom at the division until it was moved to Peacock. 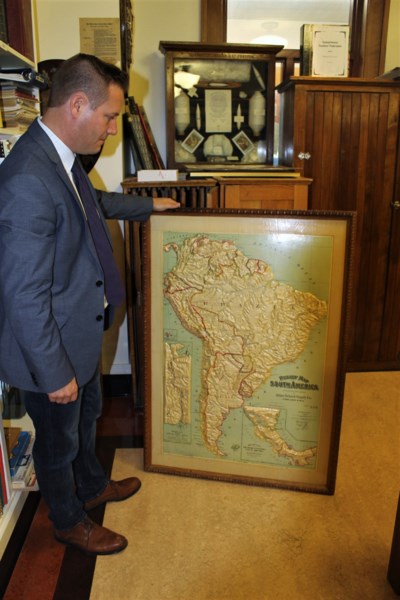 A.E. Peacock’s principal Dustin Swanson pulled out one of the many relief maps, used in the 1920s.
“It’s a diverse mix of artifacts and furniture, and I think it’s a really great opportunity for those interested in the history of the schools here,” said Swanson. “A lot of this stuff tends to get lost, and so we’re really looking to preserve this history.”

Swanson also pointed out that the Moose Jaw School Division was the first established in the province, making some of the schools here a large part of education history. Victoria School, for example, was the first school officially opened in Saskatchewan.

The Archives Room was recently reorganized, and Swanson thought it would be great to invite the public in for an official visit — especially with Oct. 20-26 being Education Week in Saskatchewan.

“There's lots of neat stuff here, and everywhere you look you see something more,” said Swanson.

The open house, running from 5 to 8 p.m. on Oct. 24, is the first public event Peacock has hosted to show off the Archive Room, although it’s not as though the collection is under lock and key.

“We know that those hours might not work for everybody,” said Swanson. “And so we are more than willing to open it up [for people to view], if they come in during school hours as well.”

Photographs will be on display for people to flip through, some of which are undated, and so Swanson hopes maybe the public can supply some of that missing information.

“I think for a lot of Moose Jaw people, just seeing the old photographs is interesting. Until people started putting things up on Facebook, those pictures were invisible,” said Swanson. “Some people are going to recognize relatives or maybe themselves in these photos, and that's our hope, is to reclaim and know a bit more about the history of some of this stuff.”

Swanson also noted that the collection would be open to expanding if there are any items floating around that the community would be willing to donate.

The Archive Room is located on the main floor of the building, across from the office, and visitors are encouraged to use the main doors when they stop in.