Outdoor rinks throughout city expected to fully open next week 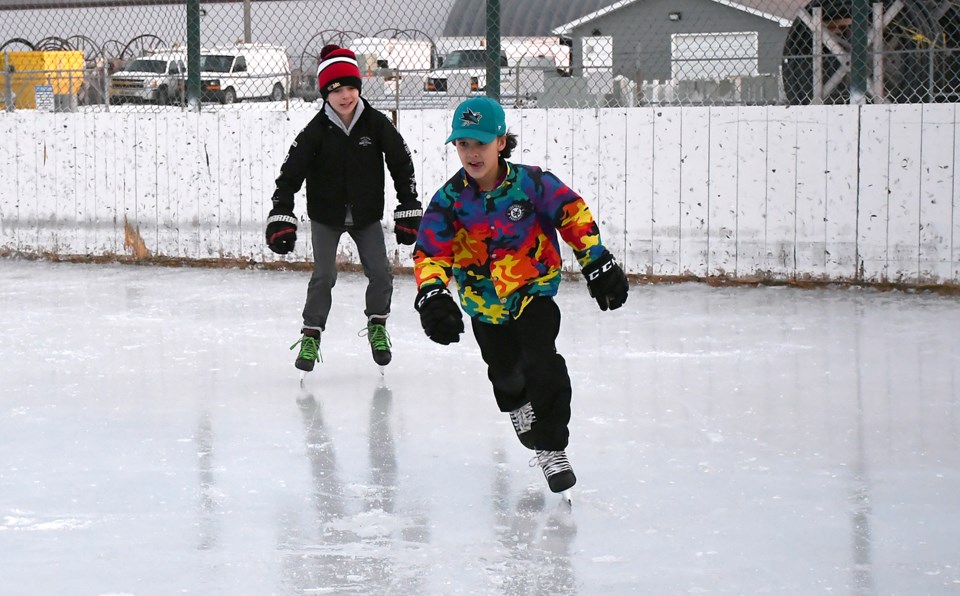 Youngsters were out enjoying the Moose Square rink on Stadacona Street West on Thursday night.Randy Palmer
If things go according to plan and the weather cooperates, folks looking to go for a skate on outdoor rinks in Moose Jaw will have plenty of options as early as next week.

City of Moose Jaw recreation services manager Scott Osmachenko said on Thursday afternoon that crews are hard at work all over the city getting skating rinks in shape and with cooler weather on the horizon, those efforts will pay off quickly.

As of Jan. 7, the Wakamow Oval and Moose Square (600 Block Stadacona St. W) are both fully open, as is the community association rink at Kinsmen West Park on Meier Drive.

“I’ve been in contact with crews around town and they’re saying they could have the lights on six more rinks (Thursday night),” Osmachenko said. “Optimistically, looking at the forecast, we should have them all up next week. That’s what we’re planning on right now.”

Normally, the outdoor rinks would have been open weeks ago. But with the exceptionally mild weather through the early days of January and daytime highs well above freezing, things have taken a bit more time.

“It’s almost like a heat lamp is basically what happens,” Osmachenko said. “The progress is tough when it melts, you put water on it, it melts, you put more on, it melts again. So this week was almost a wash, when you get up to five, six degrees in a day it’s definitely tough to build ice.

“But it looks like it’s going to be minus-five, minus-seven this weekend, so that will be good to get some ice built up and get the lights on so it’s safe for everyone.”

Seeing the lights on at your local rink means all is good to go -- the surface is level, there are no large cracks and no grass showing. Things are as safe as they can be, and the public is welcome to throw on the blades and throw down a few circuits.

The reason the rinks take a bit of time to put together is directly related to the above: the procedure to make things as smooth as possible and as safe as possible.

The process starts with preparation in the fall, where the grass is cut down, the surface is made as level as possible, the boards are straight and no nails are sticking out, everything to make the flooding portion go smoothly.

From there, it’s up to the weather once the hoses are turned on.

“The water soaks into the ground, but once the ground freezes it allows us to build ice, and that’s a bit of a process,” Osmachenko said. “You can’t do too much at a time or it cracks on you. So there are a lot of smaller layers of ice to build up a quality surface.”

That involves the use of two crews, one that snowblows everything clean and the other coming out to flood. Hoses are removed from the shack, rolled out, the ice surface flooded and then they’re back again the next day to do it all over again.

All told, the process can take a few weeks, especially if it’s really nice out.

Once the lights are on, rink supervisors will be on hand for three days a week or more at eight rinks in the city, with hours being posted on their website at moosejaw.ca/parks-recreation-culture/outdoor-rinks-crokicurl/.

And, of course, there are special regulations in place due to COVID-19. Only 30 people are allowed on a sheet at a time, with no hockey allowed and the nets being kept in storage for now. If things are crowded, skaters are asked to wear masks and keep close to their household group.

In the end, Osmachenko is hoping plenty of participants will make use of the rinks in the coming months, especially given the push toward outdoor activities.

“Through the summer we noticed how popular outdoor recreation was with COVID, so we were anticipating another busy winter again and that’s why we’re trying our best to get things ready,” he said. “You wouldn’t think it would be plus-5 and raining in January, but that’s how it is and we’re just working around it.”

For the latest information, which rinks are open and rules and regulations, be sure to visit the City of Moose Jaw website.