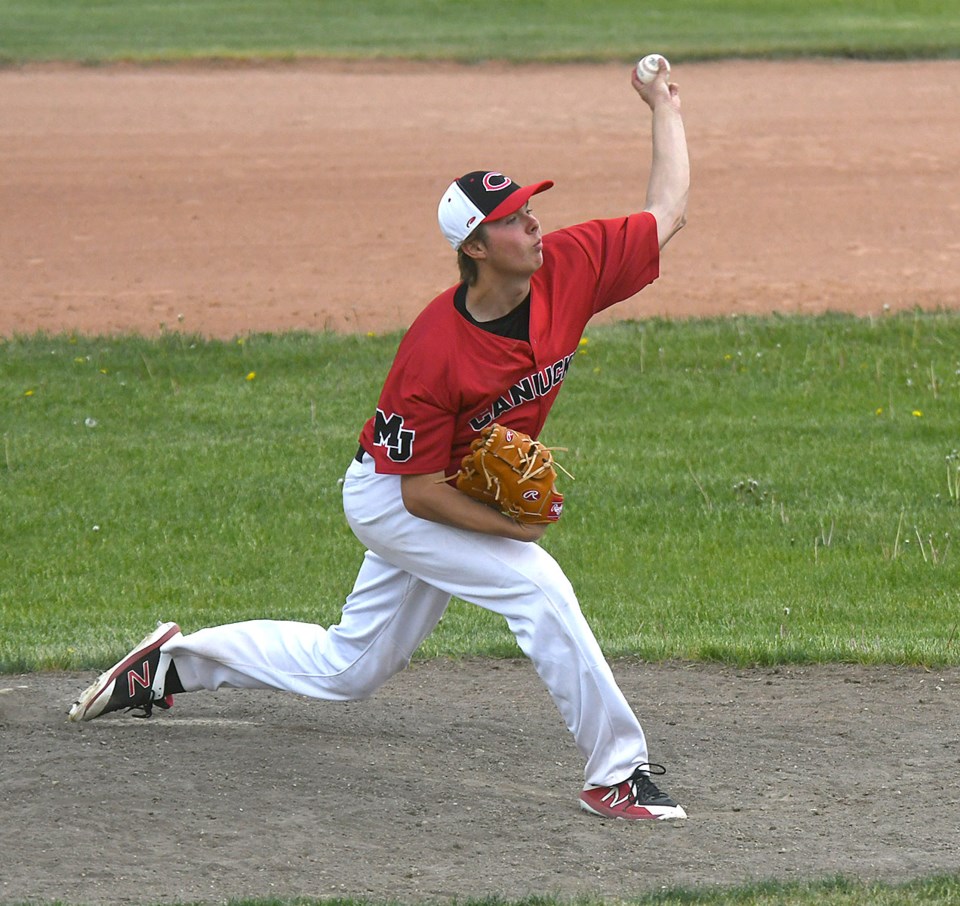 Cam O’Reilly tossed a complete game to earn the win over the Regina Athletics on Thursday night.
One thing has become very apparent for the Moose Jaw Canucks in Saskatchewan Premier Baseball League 18U AAA action this season -- if they have to win two games and have their aces available, they’ll be able to hang right in there with anyone.

Because if Cam O’Reilly and Kaleb Waller are on their game on the mound, a win is definitely in the cards.

Both pitchers were in action this week and threw complete games, with Waller going seven innings and dropping a 5-3 decision to the Regina Wolfpack on Tuesday, while O’Reilly pitched an extra inning on top of his full game and took a 5-3 win over the Regina Athletics Thursday.

Moose Jaw improved to 9-13 on the season and now sit in seventh place in the 14-team league. They were back in action on Sunday, July 18 in a doubleheader in Swift Current, with scores unavailable as of press time.

As has been the case pretty much any time Waller has taken a loss this season, errors made the difference -- even if the Canucks only had a couple of them.

The Wolfpack scored three runs in the top of the fourth, but only one of those was earned, and the two extra scores would end up being the difference in the contest.

Waller finished with only two earned runs on eight hits and three walks through seven innings, giving him a quality start (six innings pitched with fewer than three runs allowed). He’d need 104 pitches to get through the contest.

Cole Breitkreuz had a double, run scored and run batted in, while Nathan Varjassy and Kyle Duncan also crossed the plate for Moose Jaw.

Hours before O’Reilly was officially announced as one of four recruits for the St. Clair College Saints, he would toss a gem for the Canucks in taking the extra-inning win.

O’Reilly pitched all eight innings, and even though the A’s would use the international tiebreaker to pick up a pair in the extra, his teammates had his back, scoring five in the top of the frame to secure the win.

O’Reilly’s line leading up to the final frame was also a quality start -- three runs on eight hits to go along with four strikeouts.

Breitkreuz had a 2-for-4 day at the plate and scored a run, while Evan Callaghan was 2-for-4 with a run and an RBI. O’Reilly helped his own cause out by crossing the plate twice.