Regina author Margot Johnson uses some familiar Moose Jaw locale as the setting of her new romance novel
May 4, 2021 12:00 PM By: Larissa Kurz 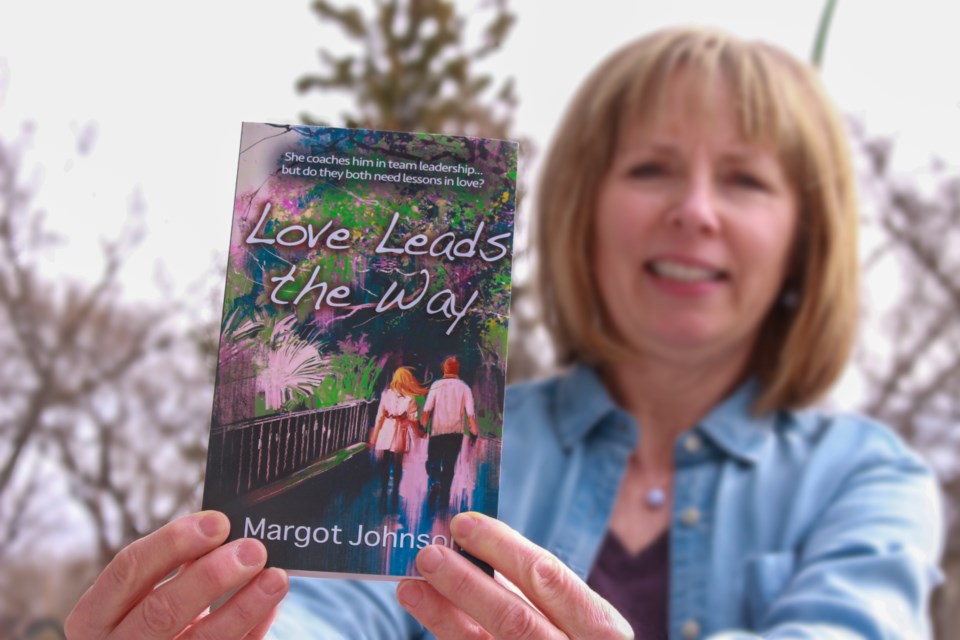 Regina author Margot Johnson is excited to announce that her second novel is on shelves, and she’s still utilizing Moose Jaw as a setting to entice readers.

Titled Love Leads the Way, the story follows two main characters who collide in a team leadership training course: a single mom who is running the program and an engineer who doesn’t think his interpersonal skills need any work at all.

“That sets things up for where they clash, but eventually they have some adventures and learn that they have some things in common,” said Johnson. “I think it’s fun to explore how opposites might attract, and to be able to look at what really makes people tick and how you can become your best self.”

The novel touches on topics of dementia, as both of the main characters are caring for a parent with the disease, but Johnson said the story itself is still light and humorous.

“Even though [Alzheimer’s] is a serious topic, sometimes you have to look at the bright side. There’s humour woven in, through the different situations, and I think people appreciate that right now. It’s something that feels good and has a happy ending,” said Johnson.

A lot of elements of the novel are sourced from Johnson’s own personal experiences, as she previously worked in human resources and communications.

Johnson also has experience supporting a parent with dementia, meaning her depiction comes from a place of truth, and she wrote in golden retrievers as a companion for her main characters, inspired by her own loyal canine sidekick.

The main setting of Love Leads the Way is Regina, Johnson’s home city, but a portion of the story does travel over to Moose Jaw and features some recognizable locale — and some that maybe isn’t so familiar.

“The leadership program goes on a retreat for a few days at a time, and one of the retreats is set in Moose Jaw,” said Johnson. “I think Moose Jaw is a great place to visit, and [the mineral spa] is a good spot for a meeting or to have a group congregate.”

The novel also uses Crescent Park, where the main characters go for a romantic stroll, and a downtown bowling alley that Johnson clarified is entirely fictitious.

“I wanted the characters to be able to walk to this activity from the spa, where they’re staying, [so] out of my imagination I created a bowling alley near downtown,” said Johnson. “People love reading about places they know, [but] I don’t want anybody looking down a side street for a bowling alley that’s fictional.”

Love Leads the Way is Johnson’s second novel set in the familiar scene of southern Saskatchewan, following her debut novel Love Takes Flight set entirely in Moose Jaw and the nearby 15 Wing airbase.

She said that her publisher and her readers are still very interested in the prairies as a setting — and she enjoys using familiar places herself.

“Since I’m from Saskatchewan, I think it’s great to write about Saskatchewan,” said Johnson. “And I like the sound of ‘Moose Jaw’ too, and I think readers find it a little bit interesting and quirky to have a city with that name.”

Johnson promised that Love Leads the Way is a feel-good story that still offers a few twists and turns to keep readers on their toes, while still offering all the warm fuzzies of the genre.

“I like writing about people’s dreams, family, romance and happy endings, and I don’t think it has to be predictable,” said Johnson. “When you go to a romantic comedy movie, you know it’s going to have a happy ending but you have no idea how it's going to get there along the way, and that’s what I like to do in my books.”

The romance genre can offer a great escape from reality, said Johnson, and she’s finding that many readers are expressing interest in the genre right now because of the stresses of the pandemic.

“People like to escape some of the bad news, so when you get into a good romance, it's a different world. It’s a place where you can feel good and things turn out well in the end,” said Johnson. “I think people are gravitating towards that kind of reading because it's positive, and that’s important right now.”

Love Leads the Way is currently available to order online through Amazon or any other bookstore sites. Copies of the novel are also available locally at Post Horizon Booksellers and the gift shop at the Western Development Museum in Moose Jaw.

Young author contest from Wood Dragon Books already looking ahead to next year
Apr 16, 2021 10:00 AM
Comments