More people paddling the river after months of indoor isolation 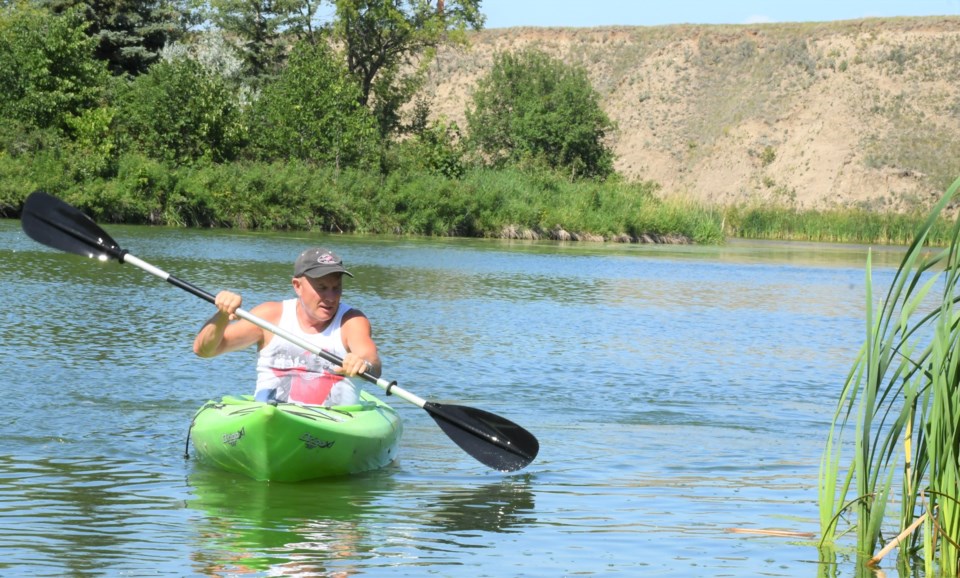 Tim Metka, supervisor of Moose Jaw River and Adventure Tours, demonstrates how to use a kayak during a hot afternoon in Kiwanis River Park. Photo by Jason G. Antonio

After being cooped up inside for months, many people have jumped at the chance to rent a canoe, kayak or paddleboard and take a peaceful tour through Wakamow Valley.

Moose Jaw River and Adventure Tours has been busy since it opened its doors for the season on May 1, although traffic picked up once it expanded its hours in July to seven days a week and from 11 a.m. to 7 p.m., explained supervisor Tim Metka. Since Canada Day, the business has seen double the amount of traffic over last year.

When the Express visited the boathouse in Kiwanis River Park on July 30, there was not a soul anywhere nor was anyone on the river. However, it was 33-degrees Celsius with the humidex pushing that to 38-degrees Celsius, so most people were likely taking an afternoon siesta.

Aside from that, though, hitting the river has been a popular pastime this summer.

“Business has been very good. It’s been very good (and busy) during the week, while it’s been busier in off-peak hours (away from 1:30 to 3:30 p.m.),” Metka said. “Because of the coronavirus, people want to get out.”

From what Metka has heard, during the first three weeks of July, there was not a kayak anywhere in Canada to purchase — every store had sold out. He joked that people have gone from baking sourdough bread to painting their homes to buying bicycles to purchasing kayaks and canoes.

One of the best things about paddling the Moose Jaw River is how much wildlife people will see depending upon the time they go, he continued. Over the past few months, Metka has seen or heard about geese, baby raccoons, baby skunks, beavers, minks, snakes, red-winged blackbirds, killdeers, and turtles.

What’s interesting is baby animals haven’t been seen much in the valley the last couple of years, he continued. Furthermore, he was shocked to see Baltimore orioles — the birds, not the baseball team — flitting throughout the area this year. Those birds weren’t around much in the 1980s and 1990s, but have made a comeback.

One of the few creatures that haven’t returned in large numbers is frogs. Metka can remember the valley being full of the amphibians in the 1960s before their numbers declined.

If people want to see more animals, it’s best to come early in the morning or in the evening when it’s not so hot. Most animals — including beavers — will hide in the cool shadows if it’s the middle of the day.

It’s great to canoe or kayak on the river this year since there are no treacherous parts, the current is very slow and there are only a few shallow spots, Metka said. Kayaks are generally the popular choice for users, but this year there has been a rush to rent canoes.

While most people who rent a kayak, canoe or paddleboard are from Moose Jaw, a good portion of users come from Regina since they like how sheltered the river is, he continued. It also helps that nearby are the campgrounds, the Burger Cabin, and the Ice Hut, Metka can send people for burgers or ice cream after their river adventure.

For Metka, the best part about hitting the water is how calm it is.

“I suffer from hypertension (and) high blood pressure and I take pills for it. But there’s nothing like being on the water to relieve your stress,” he chuckled. “And it’s extremely good exercise … . It is a nice little river; it’s a nice spot … . People really enjoy it.”