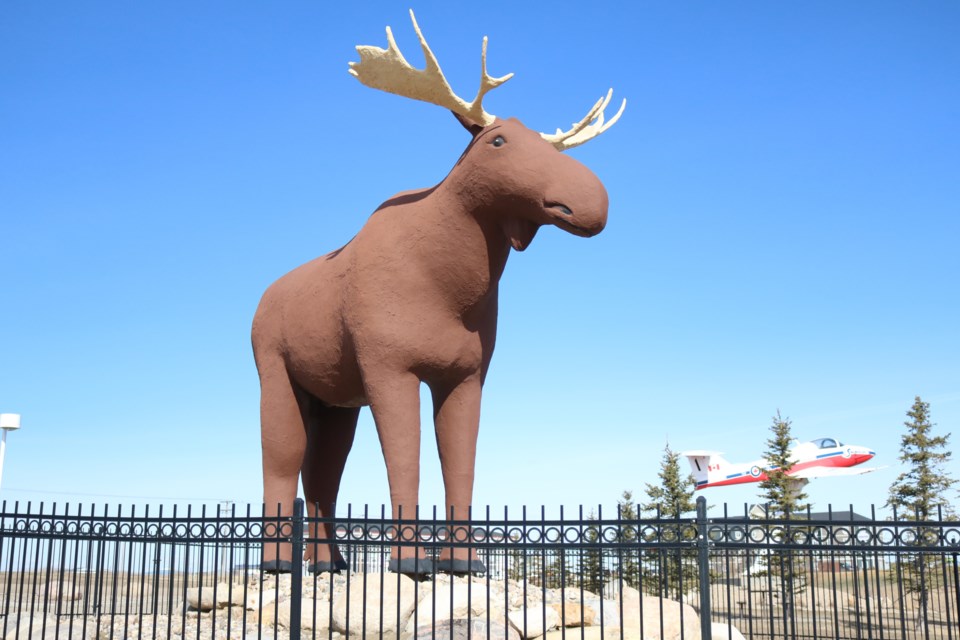 Mac the Moose, prior to shedding his antlers (file photo)

The “moose war” between Stor-Elvdal, Norway and the City of Moose Jaw was a marketing bonanza for Canada’s Most Notorious City, as the monetary value of all news coverage totalled $7.4 million.

The birth of the moose feud — or an international moose beef as the Norwegians dubbed it — began on Jan. 11 of this year, as Moose Jaw sought to reclaim the title of the “World’s Largest Moose Statue” from the municipality of Stor-Elvdal. It took nearly three months for the moose war to end, when a “moosarandum of understanding (MOA)” was signed between the two municipalities.

So was all the media coverage worth the attention? That’s the question city hall wanted answered, so the communications department hired Canadian company Meltwater for $1,060 to measure the online metrics of how many times the phrase “Mac the Moose” was used in media stories and social media feeds in that two-month period, explained communications manager Craig Hemingway.

“The results were staggering,” Hemingway told city council during its Sept. 23 regular meeting. Between unique news stories and social media mentions, the phrase “Mac the Moose,” in relation to the Moose War, was seen around the world 993,000 times.

Caption
According to data from Meltwater, between Jan. 11 and March 10, there were seven spikes in media exposure when reporting on the moose war. The largest spike occurred on Feb. 28, when more than 200 media mentions occurred after Linda Henriksen, deputy mayor of Stor-Elvdal, visited the community.

The majority of unique news stories produced during the two months — 938 — occurred in Canada, followed by the United States of America (91), Sweden (37), the United Kingdom (25) and Norway (24).

The total monetary value of the news coverage was $6.3 million, including another $1.1 million in social media value.

The number of news stories helped Moose Jaw tell its story properly, Hemingway said. City hall used the data from Meltwater as part of its submission for an award — which it won — with the Economic Development Association of Canada.

Caption
Beyond the marketing value, “immeasurable value was realized” from the effect on the community, Hemingway said. This was a collaborative effort among the mayor’s office, Tourism Moose Jaw and city administration, plus community groups, schools, 15 Wing, the WHL Warriors and businesses.

“Moose Jaw had never experienced a story like this before,” he continued. “However, through creativity, timing and communication this story grew beyond any reasonable expectations.”

There was also a great sense of community spirit shown toward Mac the Moose, Hemingway remarked. This was apparent in the social media and community media responses, and in the GoFundMe donations from residents and businesses to make Mac’s rack a world-beater once again.

It was an emotional moment when Henriksen visited the community and met with a small group of residents of Norwegian descent, said Coun. Heather Eby. Henriksen spoke to those people in their native language, which was important to them.

“For me, that was the part that was really worth it,” she added.

The moose feud helped remind the community how important Mac the Moose is, observed Coun. Crystal Froese. It was a gift that helped breathe life back into the venerable statue.

“We had forgotten how important of an icon he is in the city,” she added.

Mayor Fraser Tolmie thanked Hemingway for his work in co-ordinating communications with the media during the moose war, especially since this story had global reach. Tolmie also thanked Tourism Moose Jaw and its executive director Jacki L’Heureux-Mason for their work.

The next regular council meeting is Tuesday, Oct. 15.

Schedule released for upcoming Moose Jaw Miller Express season
Dec 1, 2020 3:28 PM
Comments
We welcome your feedback and encourage you to share your thoughts. We ask that you be respectful of others and their points of view, refrain from personal attacks and stay on topic. To learn about our commenting policies and how we moderate, please read our Community Guidelines.