The K9 Unit is now available on each patrol shift, thanks to the addition of a fourth officer and dog team
Oct 17, 2019 9:05 AM By: Larissa Kurz
Previous Next
1 / 1 PSD True demonstrated how she can latch onto a target, in this case Cst. Chad Scheske, with a verbal cue from her handler, Cst. Aaron Woods.
Expand
Previous Next

The K9 unit at the Moose Jaw Police Service is just finishing the process of expanding to include four highly-trained officer and dog units, which means there will be a K9 team available on all of the MJPS’s shifts from here on out.

Police dogs actually cost between $7,500 and $12,000 to acquire, as they are bred specifically for the task. German Shepherds and Belgian Malinois are the most common breeds, and dogs usually work for about seven to nine years on the force.

The dogs chosen for this line of work tend to be male, mostly because female dogs with the necessary traits for the job are usually kept for breeding rather than put into the line of duty — which makes Moose Jaw’s K9 unit unusual, as two of four dogs on duty are female.

Cst. Chad Scheske was one of the first two handlers trained when the unit began in 2009. He and his colleagues continue to work with training partners across the province, but the majority of the unit’s time is spent training in and around Moose Jaw.

“The idea is that we get out and train in as many places that we may have actual calls, that we can,” said Scheske. “[A lot of] our tracking is done in residential sweeps throughout Moose Jaw, because we don't know where we're going to be . . . We focus on the streets of Moose Jaw, for sure.”

Training a police service dog for a K9 Unit is not an easy task. Each dog and handler go through an intense 16 to 20 weeks of training, all of which begins with obedience as a foundation.

Police dogs are also utilized for more than criminal apprehension, although the chase and take-down skills are often what most people hear about. The majority of their training actually focuses on tracking, which is the toughest skill to master, as well as searching for both evidence and people either fleeing or missing.

A trained K9 team can search a building about twice as quickly as a human team of officers and can locate discarded evidence using scent.  An additional five weeks of training can give a team skills for drug detection, which one team at the MJPS has completed, or bomb detection. 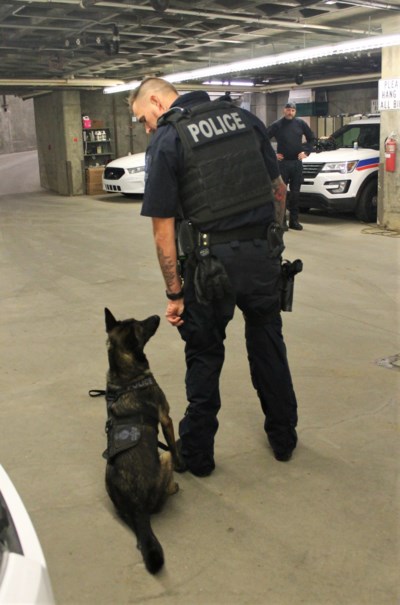 PSD True is extremely tuned in to what her handler Cst. Aaron Woods is telling her to do, which is paramount to a successful K9 team’s success.
Police dogs utilize scent the most when performing their duties, which Cst. Scheske explained is effective because people engaged in high-stress situations — such as crime — sweat out what’s called an “enhanced scent.”

The adrenaline and other pheromones in that enhanced scent are what police dogs latch onto, and gets them excited during tracking, searches, and chases.

“A bad guy who's running from the scene, his adrenaline's going to be pumping and he will actually sweat from different glands,” said Scheske. “And although it's individualized, that enhanced odour for the dogs is like crack cocaine.”

But the K9 Unit isn’t deployed just for large-scale searches or high energy chases. K9 members are regular patrol members, with a few extra duties — they assist in the implementation of warrants, and they respond to the more dangerous calls as extra support.

This means they are often on the scene for violent offences like robberies or assault, as well as in situations where the suspect is fleeing on foot, hiding from authorities, or evidence needs to be located.

Utilizing police dogs is beneficial to law enforcement in that it can help create a safer environment for officers in a situation. K9 teams are meant to help resolve a situation, and handlers carry a lot of responsibility to control their dog in the most beneficial way.

Cst. Scheske explained that K9 officers will not deploy their dog into a dangerous situation unless it is the only option to prevent injury to a police officer or civilian, a policy that is largely for the safety of both the dog and others involved.

“Ultimately, the decision to deploy the dog is up to the handler,” said Scheske.

The K9 Unit with the MJPS is one of five law enforcement departments in Saskatchewan operating with officer-canine teams, and is an important resource within the MJPS.

Members of the K9 Unit are hosting a Meet and Greet with the public on Oct. 19, to introduce the two newest members of the team and to show off what dogs and handlers are capable of — without the need for crime.

Details for this article were given as part of the Moose Jaw Express’s attendance at the Community Police Academy.