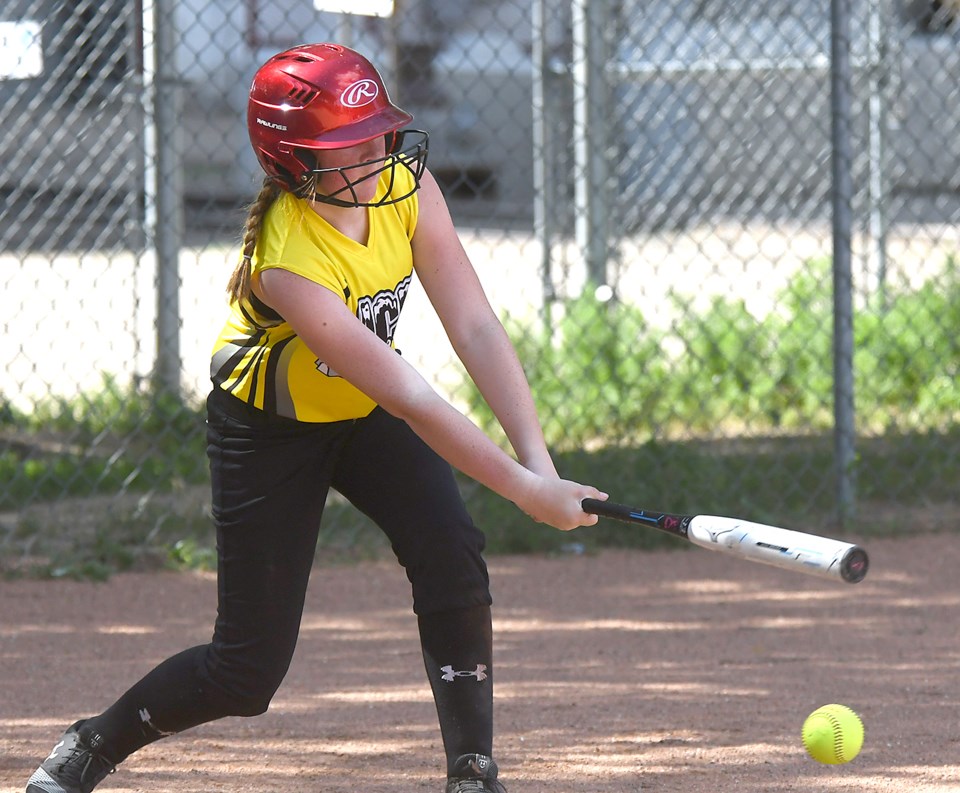 Georgia Fowler hit a three-run home run for the Moose Jaw Ice against Gravelbourg..
The Moose Jaw U12 B Ice finally ran into some serious competition. And now they know that if they face the Gravelbourg Lightning again this season, they’ll most certainly have a game on their hands.

The Ice battled to a 12-12 tie in the opening game in Gravelbourg on July 31 before dropping a 10-9 decision in the doubleheader rematch.

Moose Jaw is back on the diamond Tuesday when they travel to Regina to take on the Lazers White.

As a team used to scoring 20-plus runs a game with ease, the Ice were suddenly faced with a team just as aggressive on the basepaths as they are – and that led to their most back-and-forth battle of the season.

Gravelbourg took a 4-1 lead out of the first inning, only to see the Ice rally for five runs and a 6-4 edge in the second. That lead didn’t even last a half inning, as the Lightning responded with the five-run-max in the third, only to see the Ice pull within two 9-8 in their half of the frame.

Both teams scored three times in the fourth, setting up a dramatic bottom of the fifth, as Moose Jaw was the home team in the opening game.

After Lily Hardwicke hit a lead-off single, went to second on a throwing error and advanced to third on a wild pitch, Bella Schultz would bring her home with an infield single. Schultz would eventually get to third with two outs but would be unable to score the winning run.

Georgia Fowler finished the game 2-for-2 with with two runs scored and four runs batted in, including a three-run home run in the second.

Sophia Johnstone, Fowler and Aurora Wingenbach all saw action in the circle.

The Ice took a 9-5 lead into the final inning but wouldn’t be able to make the lead stick, as the Lightning took advantage of eight walks and an error to score five runs and take the win.

Wingebach was 2-for-3 with an RBI, while Johnstone was hit by a pitch for the third time in two games and came around to score a run.

All told, the Ice scored their nine runs on eight hits and 10 walks – a far cry from the 20-plus free passes they had in earlier games – while Gravelbourg did their damage on three hits and 16 walks.

Avery Funke and Wingenbach pitched for the Ice.