Total of 12 teams from throughout southern portion of province taking part in tournament beginning Thursday
Oct 29, 2020 6:34 PM By: Randy Palmer 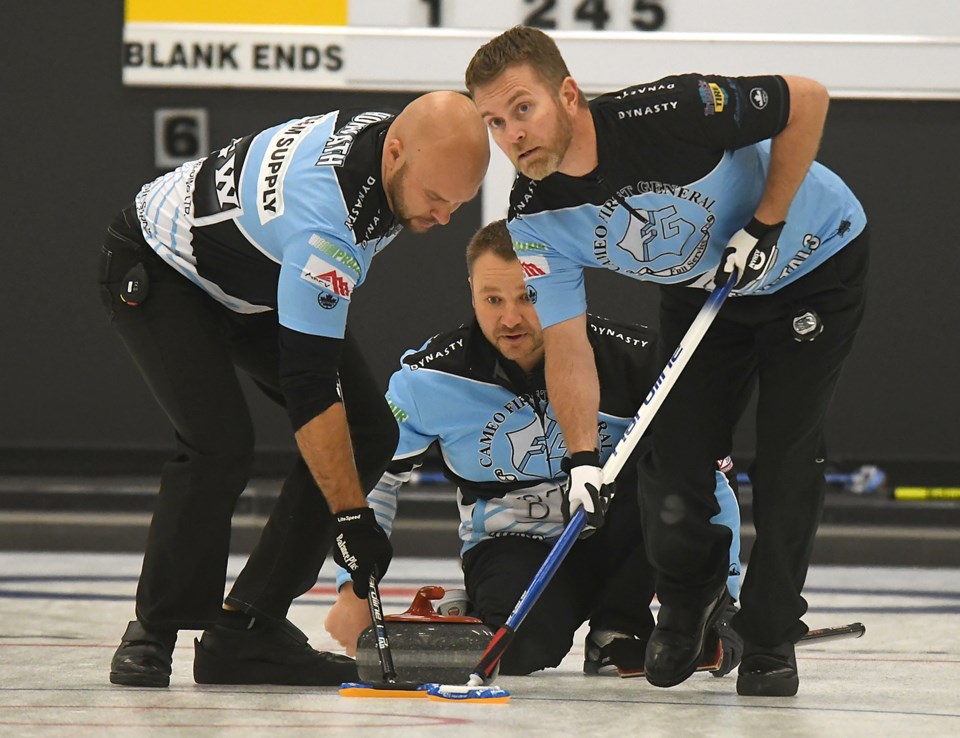 Curtis Horworth and Derek Owens sweep as Brent Gedak watches the line during the Moose Jaw SCT stop in 2019.
The Moose Jaw Ford Curling Centre will be a happening place this weekend, as teams from throughout the southern portion of the province take to the ice for the Moose Jaw stop on the Sask Curling Tour.

The 12-team event will act as a qualifier for the SaskTel Tankard, with teams earning Provincial Team Ranking System points. The top eight ranked teams as of Dec. 22 will earn automatic Tankard berths, with the final four spots advancing out of a Last Chance spiel during the Jan. 7 weekend.

There are plenty of rinks with local connections to cheer for.

Montgomery himself will be playing third for Regina Highland’s Kelly Knapp, who will have Mike Armstrong at second and Trent Knapp at lead.

Ben Gamble and his Regina Highland foursome of third Braydan Mohns, second Tyler Krupski and lead Rory McCusker are all regulars in the Original 16 Cash League at the Moose Jaw Ford Curling Centre; Brett Behm and his team of third Brendan Ross, second Daniel Mutlow and lead Ian Howell are the lone team curling out of the local rink.

And then there’s Team Howard.

That would be none other than Canadian curling legend and current TSN analyst Russ Howard, who will skip son Steven’s Regina Highland foursome of third Daniel Selke, second Mat Ring and lead Scott Deck this weekend. Russ now lives in Regina, having moved to the city this past May to be closer to Steven -- who works in Fort McMurray but has a girlfriend in Regina -- and daughter Ashley, who is the executive director of CurlSask.

The tournament will feature a host of COVID-19 related rules for fans.

Only 30 will be allowed in the building, and will have to watch the action from the upstairs lounge, with fans asked not to arrive at until after the draws have started. Fans will have to sign in at the door in order to facilitate potential contact tracing.

Round robin competition will continue throughout the weekend, with the playoff round beginning at 9:30 a.m. Sunday and the championship final tentatively at 4:30 p.m.