"I just need him to get better. He just deserves so much better. He absolutely deserves this treatment. We need to get him there because we're watching him die and he's only nine," said Britten Hepting, Easton Mengel's mother, about his battle with CRPS
Larissa Kurz Feb 13, 2020 8:00 AM

At just nine years old, Easton Mengel lives with a chronic pain condition that has been ranked the most painful known to the medical field — a devastating reality that has his family determined to get him treatment.

Mengel has a rare form of complex regional pain syndrome (CRPS) that affects not only his afflicted limb but also the rest of his body, inside and out.

His central nervous system has been rewired to decode all signals from his body as pain signals, leaving Mengel to suffer from continuous burning pain from head to toe.

Mengel’s condition stems from an untreated ACL tear sustained during football practice just over sixteen months ago, which was left for too long without diagnosis or physiotherapy.

After many months and pressure from their pediatric physiotherapist in Moose Jaw, a pediatric surgeon in Saskatoon diagnosed Mengel with the rare chronic pain condition, rated higher on the McGill Pain index than cancer, childbirth, and amputation — and nicknamed the “suicide syndrome” because the pain is so difficult to live with.

Since then, Hepting has watched her son’s life change drastically for the worse.

“This nine-year-old, he has shown more strength than anybody I've ever met. He's unbelievable, how he keeps going,” said Hepting.

Mengel is now mostly confined to a wheelchair or crutches, unable to walk or use his right arm. He is unable to go to school, see his friends, or do the things that he enjoyed before his injury — things like playing football, going snowboarding and skateboarding, riding his bike, being on the ball team.

“I just haven't even seen his personality in long. He was so funny. He used to make me laugh, like crying-laughing almost every day,” said Hepting.

He wanted to be a cop when he grew up, said Hepting. 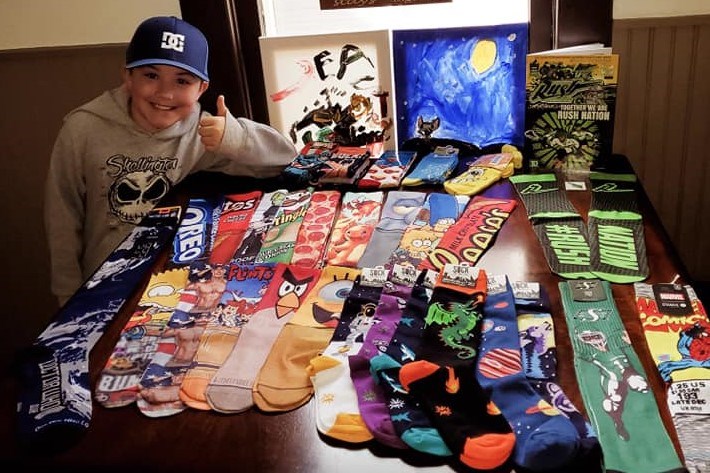 Easton poses with just some of the impressive collection of colourful socks he’s received through the Socks for Smiles campaign. (supplied)
CRPS is a disease that isn’t well-understood by medical professionals and has had very little research done about it. Hepting and her husband, Shawn Mengel, have been continuously frustrated with the health system during this difficult journey.

“None of this should have happened. He should have never had to go through this, but here we are and now we're fighting to save him,” said Hepting. “It's the hardest thing I've ever done in my life, watching this poor child scream and lose his life.”

Through her own research, Hepting discovered a treatment program in Verona, Italy that offers a ten-day treatment for CRPS. Using a combination of neridronate injections, water therapy, light therapy, and physiotherapy, patients have seen a high success rate in reducing CRPS-induced pain.

“I can’t even put it into words,” said Hepting. “Getting [Easton] to Italy would mean the absolute world to us because it would be like we would finally, finally get him back because we are losing him.”

The treatment costs an estimated $25,000, in addition to any travel costs overseas. Mengel would travel with his father, who provides the primary income for the family.

A GoFundMe page has been set up to help the family afford Mengel’s treatment, with a goal of $40,000 to cover all expenses for the trip and any lost wages for the days Mengel’s father won’t be working.

At the time this article was written, the campaign has raised $16,450 — just shy of half of its goal. Many donations have come from local Unifor 594 members, as Shawn Mengel drives for the Co-op Refinery.

“These are real people that gave us real money and we couldn't have been more thankful,” said Hepting.

She has even reached out to invite them all to meet Mengel at the airport when he returns from treatment, to celebrate his victory over CRPS.

“He's going to walk off that plane and there's going to be so many people there cheering for him, because he did it, you know, he won,” said Hepting.

For now, the family hopes that the GoFundMe total will continue to rise, to help Mengel reclaim his childhood.

There is also an online auction on Facebook for Mengel’s cause, open to participation from anyone wanting to help raise money for his treatment, as well as a Facebook page Mengel’s ongoing Socks for Smiles campaign.

The campaign is a way to both raise awareness about CRPS and also provide Mengel with some brightness in his daily struggle with CRPS — in the form of colourful socks, mailed from all over the world.

Hepting also shared that she has a private group set up on Facebook, called Just To See Him Smile, dedicated to updates on Mengel’s condition and sharing uplifting messages or pictures for him. Anyone is welcome to join the group.

For this family, the main goal is to get Mengel to Italy for treatment, but Hepting promises it won’t be the last time she is involved with CRPS.

The whole experience has introduced Hepting to other families and CRPS patients struggling with the condition, and she is determined to continue advocating for better research and support.

“I'm telling you, CRPS has never met anybody like me before, and that's a promise,” said Hepting. “People have suffered quietly for too long and I'm not okay with that.”

For anyone interested in donating to the GoFundMe campaign in Easton’s name, titled Send Easton to Italy for CRPS treatment, it can be found here.