Brock and Bo Montgomery may live in Alberta now, but the brothers and co-owners of clothing company Mountain Life Apparel are still hoping for some support from their hometown of Moose Jaw as they close out their unique fundraising campaign to highlight frontline and emergency workers during the pandemic.

Mountain Life Apparel released a special edition hooded sweatshirt for their Hoodies For Heroes campaign in April and pledged to donate 100 per cent of the proceeds from the hoodies’ sales to the Calgary Food Bank and Airdrie Food Bank.

The hoodie design features a Canadian maple leaf and the figures of healthcare workers, EMS, firefighters, and police on the back of the hoodie, and comes in either pink or black options.

The goal of Hoodies For Heroes is to both show support for emergency workers who keep communities healthy while also raising money that will give back to the community.

Recognizing the hard work and dedication of emergency workers is an important thing during times like these, said Brock Montgomery.

“We wanted to focus on the first responders and healthcare professionals because we know it takes a whole team, they all work as one unit,” said Montgomery. “They all kind of help each other out and have the same end goal of helping people recover and get where they need to be.”

Supporting emergency workers is also a sentiment that is close to heart for the Montgomery family.

Montgomery’s father is the fire chief here in Moose Jaw, and his brother is a member of the Calgary Fire Department — and Montgomery himself aspires to join their ranks.

“There's so many different people right now in the world that need help, but we wanted to focus our attention on something that kind of hits close to home for us as well,” said Montgomery. 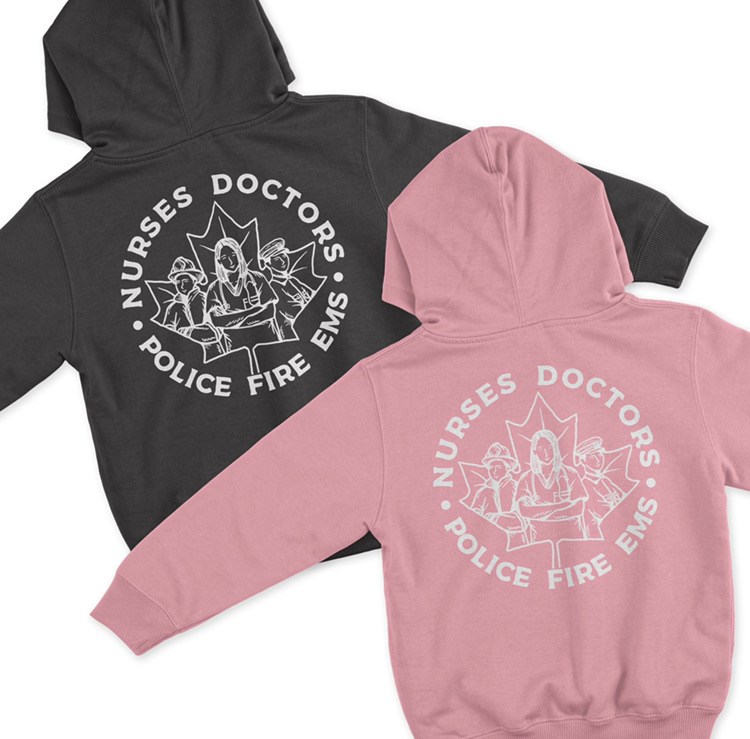 The special edition hoodies are meant to highlight emergency workers who serve their communities even during the toughest of times. (supplied)

But the campaign doesn’t just stop at raising money.

Hoodies For Heroes also gives the option of donating a hoodie to an emergency worker in the Calgary area, which the Montgomery brothers will deliver anonymously once the merchandise arrives in May.

“Everyone's trying to find ways to donate, to give back, and we wanted to kind of mix both of those together,” said Montgomery. “We thought that there's maybe people that are thinking they want to donate or are not sure how to donate, [so] we wanted to just create a fun way to do that.”

Selecting the “donate” option when purchasing a Hoodie For A Hero on Mountain Life Apparel’s website will let them know to deliver the hoodie rather than ship it to a customer.

Montgomery even said that if they see any Moose Jaw purchases marked as donations before the campaign is over, they will make sure those hoodies go to Moose Jaw emergency personnel rather than Alberta ones.

Montgomery hopes that people jump on board with the campaign, as it’s just meant to spread a little joy during such a tough time.

“This way, you're putting a smile on a first responder's face and at the same time, your money's going back to a good cause as well,” said Montgomery.

The campaign launched with a goal of raising $1,500 to donate between the two Alberta Food Banks and as of April 23, Hoodies For Heroes had collected about $1,200 already — with a week left to go.

Hoodies For Heroes will be available to purchase online until April 30, when the preorder window closes, and Montgomery is hoping to see as much enthusiasm in the second half of the campaign as was shown in the first.

“Everyone is kind of coming together at this time, which is beautiful to see,” said Montgomery. “There's so many different options out there for people to donate and people to give back, and we’re just happy to be one of them.”

Justin Trudeau wants freedoms for Ukrainians that he won’t allow Canadians to enjoy
May 16, 2022 2:00 PM