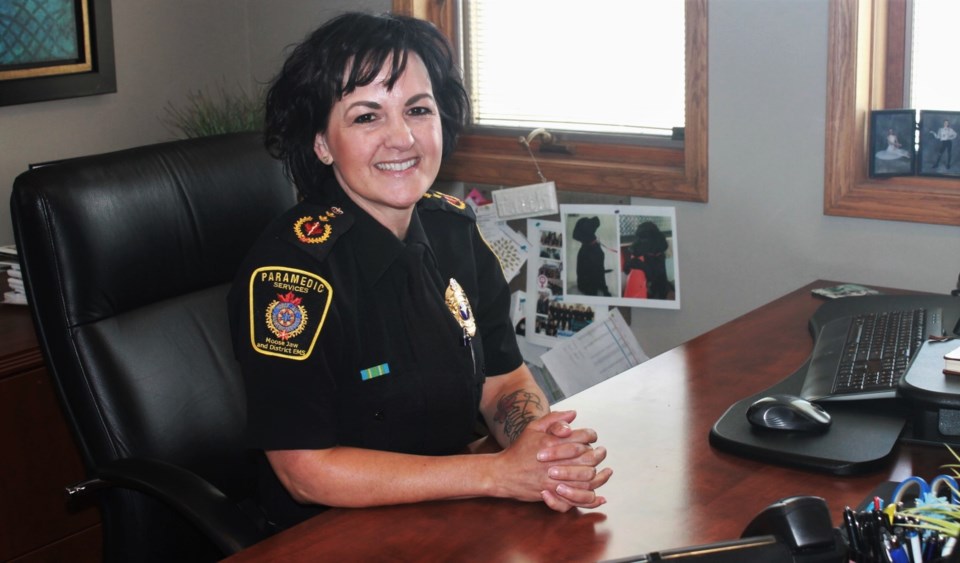 When members of the Moose Jaw & District EMS were asked to be a part of the 2019 women’s issue of Canadian Paramedicine, deputy chief Angela Sereda was more than happy to see local faces featured on the cover.

This year, Sereda thought that the Saskatchewan representation could be even stronger, which is why she suggested a feature story on the women leaders in paramedicine on the prairies.

“I knew that the issue was coming out again, and so I contacted them and said, ‘we have a lot of amazing women leaders in Saskatchewan, is it possible to do a story on us?’” said Sereda. “And they kind of put it back to me and said, ‘why don’t you write something?’”

Sereda’s article, titled “Individually Strong, Collectively Influential,” ran in the April/May issue of Canadian Paramedicine this year, and featured an impressive collection of successful women in the industry.

The article includes voices from 10 different sectors of paramedicine in Saskatchewan, as Sereda realized were all being led by women which perfectly lent itself to a discussion on support and empowerment in the field.

“It was just a natural fit,” she said. “And it was so nice to see because I got into this industry back in 1992, and it was a very male-dominated profession, so there were a lot of hurdles back then to prove yourself as a female.”

The article discussed topics ranging from the roles that women are playing in the current field to the important mentorships and inspiration that women are providing each other.

It also touches on how important embracing diversity and encouraging ingenuity in women is a step forward for the industry — especially as paramedicine continues to evolve and improve patient care goals. A few of the successful women in paramedicine featured in the recent article by Moose Jaw & District EMS deputy chief Angela Sereda. Back: Krista Remeshylo, Christina Backlin; middle: Jessica Brost, Jennifer Larre, Lindsey Boechler; front: Angela Sereda, Cindy Seidl. (supplied)
For Sereda, as both a woman and a leader within the industry herself, it was important to highlight the accomplishments of women within the greater network of paramedicine and how it will affect other women as they move forward in their careers.

“It's really nice to see the industry to where it is today, to have women not necessarily recognized because they're women, but recognized in the roles that they are in because they've worked for them,” said Sereda.

In an industry that has largely been a male-dominated field for many years, Sereda was glad to have the opportunity to highlight the successes of women in paramedicine careers.

The MJ & District EMS team currently has about 10 female paramedics on staff, out of a total of 25 paramedics.

“Our chief, Kyle [Sereda] has always been a really big supporter of women in the industry and I’m his spouse, as well, so he has supported me tremendously throughout my career,” said Sereda. “And we’ve really just tried to carry that through to our staff as well.’

Additionally, it was equally important to her to show off the strength of the Saskatchewan paramedicine scene, as there’s plenty of great work happening in the province.

“I’ve said for years, Saskatchewan hasn’t always been highlighted as it should be [so] it was really nice to be able to be that voice for the province, the industry, and all the women featured in that article,” said Sereda. “And there’s so many women who aren’t in that article who are all making such a tremendous impact and we’re excited for the future.”