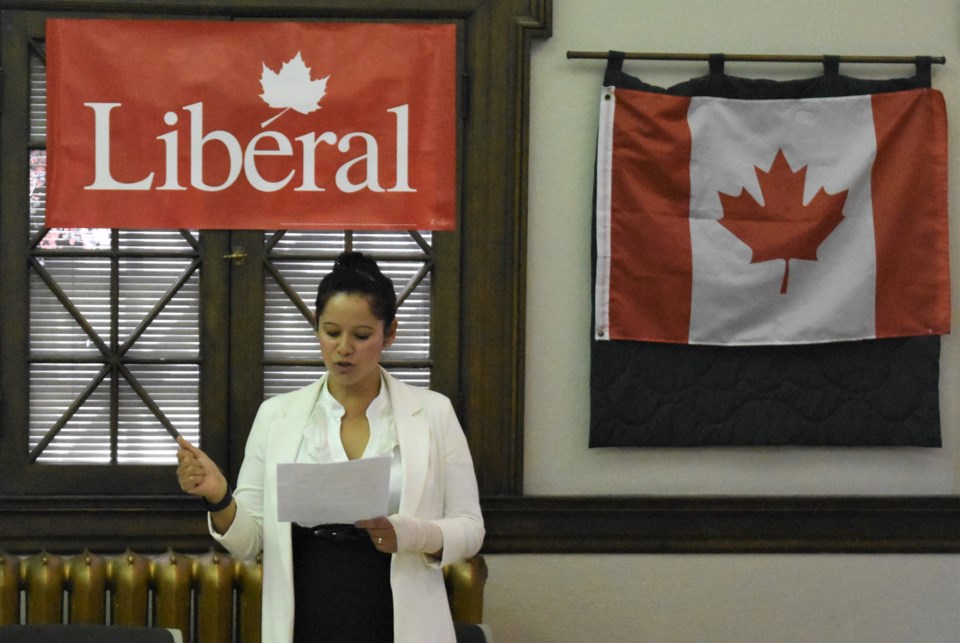 (photo by Randy Palmer)
Cecilia Melanson is the literal embodiment of an immigrant coming to Canada and successfully building a new and better life.

Now that the native of Ecuador has had the opportunity to do so, she wants to do all she can to give back to and support her new country and home – and that why she made the decision to throw her hat into the ring as the Liberal Party of Canada representative for Moose Jaw-Lake Centre-Lanigan and the coming federal election.

Melanson was officially introduced on Saturday at the Moose Jaw Public Library as the newest candidate for next month’s trip to the polls, marking the latest step in a long journey to freedom that culminated in the local announcement.

“You can read a book about issues in other countries, but I’m the one who has experienced all those issues,” Melanson said. “So I’m the best person, with a big heart, to be concerned about the issues we have here and I want to help people because I don’t want them to suffer like I did, I don’t want them to experience what I experienced. I am so happy to be to be here and representing the Liberal Party.”

Melanson moved to Canada in 2004 after growing up and living her young life in the South American country. There, she experienced the poverty and cultural differences that kept a young girl like herself from achieving much when she wasn’t surviving natural disasters like earthquakes and tsunamis that killed hundreds around her.

“In my home country, I was one of those people who want to be involved in everything, but we didn’t have money to do the things I wanted to do,” Melanson said. “So I went to my neighbour and said ‘I will do dishes for you if you give me money to buy an outfit to participate in dancing, or in soccer'. But how can you play when you’re a girl? So I grew up with that frustration, not being able to do things because I was a girl.”

Melanson’s arrival in Canada opened her eyes to what was possible in a modern and thriving country.

“When I came to Canada in July 2004, that was the first time I realized that women can do it as well,” she said. “It took me years to realize that. So I was thinking ‘how is that happening, women doing men’s stuff? Why, how is that normal?’ Because that’s what I grew up seeing.

Melanson now lives with her husband and two children in Deer Valley and has made the most of her time in Canada, becoming a graphic designer and notary public while currently working as a daycare operator and studying early childhood education at Sask Polytechnic.

It was during the recent run up to the election that Melanson was bitten by the politics bug, with the Liberal Party most aligning with her beliefs.

“I have always been intrigued by our Liberal campaign slogan: Real Change,” Melanson said. “I asked myself ‘what does real change mean to you?’ The answer is clear: a vision of the future that is different, better and fulfilling and some people might not realize that the Liberal Party is a great solution to a better future.”

There’s little question her road will be a difficult one – the Liberal Party has traditionally struggled in Saskatchewan at both the federal and provincial level, something Melanson is hoping to deal with once people hear what she has to say.

“My biggest challenges might be when I go knocking doors, sometimes people don’t want to hear about it even when you have a plan,” she said. “So I’ll do my best to approach them in different ways and maybe have a chance to share ideas.

“My dreams, my ideas go beyond (any negativity),” Melanson added. “So I hear something, I process it, if it’s beneficial for me I keep it, if it’s not beneficial it goes where it’s supposed to go.”

Regardless of how the election turns out, Melanson is looking forward to the campaign, getting word out as to her and her party’s plans and building up the Liberals in the riding as much as possible.

“There’s always some way to start from zero and build something new,” she said. “Let’s see where this takes us. I already feel like I’m a winner, getting to be here and meeting everybody, so I’ve already won and whatever the outcome I’ll be ready for that.”