NDP leader Ryan Meili promised to bring back the STC for people in Moose Jaw and all over Saskatchewan
Oct 19, 2020 5:26 PM By: Larissa Kurz

After making a similar appearance in Regina earlier, NDP leader Ryan Meili arrived in Moose Jaw on Oct. 19 in a bus formerly operated by the Saskatchewan Transit Company, to announce that an NDP government would bring the provincial bus service back to support residents.

Meili was joined by NDP candidates Melissa Patterson and Kyle Lichtenwald, for Moose Jaw Wakamow and Moose Jaw North respectively, to make the announcement and highlight the Sask Party’s history of service cuts.

"I'm standing here in front of an STC bus, which was once a common sight on Saskatchewan roads but there could no be a clearer symbol of broken promises that we've seen from the Sask Party," said Meili. "We've promised to bring back the STC, and here today you see a clear symbol of that commitment. We will bring back STC and you can trust me and trust the NDP to do what we say we will do."

The NDP representatives were also joined by Moose Jaw citizen Betty Michalski, a local senior who was a regular user of the former STC service to visit family out of town, attend doctor appointments in Regina, and keep her social life active.

"What makes me really angry is when I hear the Saskatchewan Party use the word strong. Strong for who? Certainly not for the seniors. I had my own way of transportation, riding the STC bus, which I took to go to Saskatoon, to visit my grandchildren in Lloydminster, and I would take it to go to Vancouver to visit my sister. All these options have been taken away from me, and I have absolutely no family in Moose Jaw so I depend on volunteer drivers or friends," said Michalski.  "So on behalf of the seniors of Moose Jaw and Saskatchewan, I say that we need some kind of transportation and not cutting transportation." 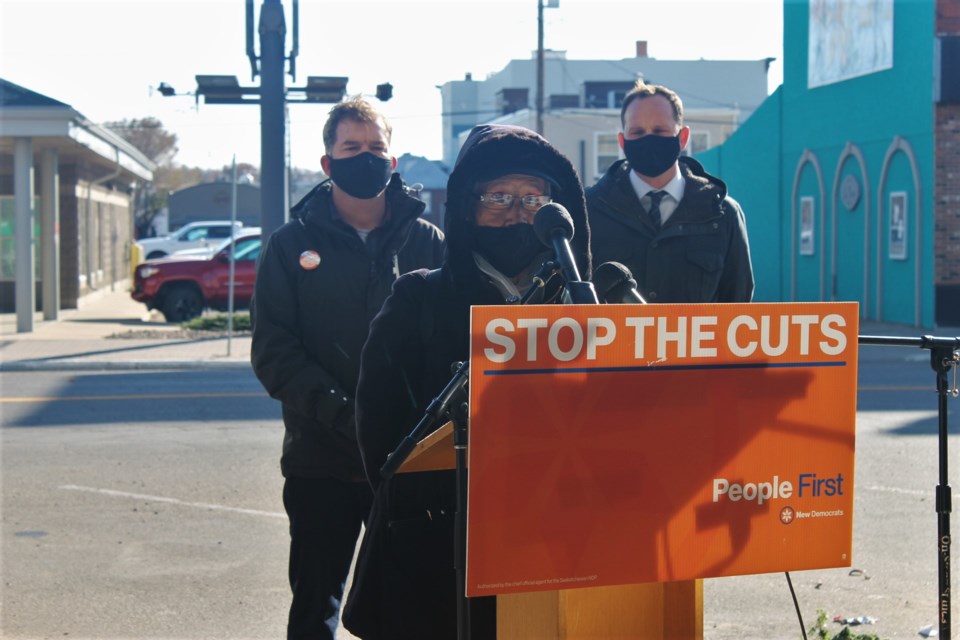 Moose Jaw resident and former STC patron Betty Michalski spoke about how the loss of the Crown bus service has affected her life.

The STC was closed in 2017, leaving a gap in long-distance transportation services in Saskatchewan. Private companies have attempted to fill the gaps, which the NDP shared only covers about 11 per cent of the STC’s original routes.

Moose Jaw currently has one bus service to Regina operated by Rider Express on weekends, which was announced this past February but has since been suspended due to the pandemic.

"In 2016, [the Sask Party] was very clear that the STC was safe and not for sale. Only a year later, it was gone, leaving people stranded all over Saskatchewan,” said Meili. “Seniors, unable to get to the city for appointments; farmers, losing days in the field while they wait for parts; young people unable to get home to visit when they're away for school."

Meili also highlighted the Sask Party’s other cuts, including the closure of 40 liquor stores, meetings to discuss selling other Crown corporations SaskTel and SGI, and the cuts of the hearing aid program, recruitment and retention funds for doctors and nurses, the rental supplement that supported vulnerable Saskatchewan residents and to healthcare and education budgets.

Meili concluded with a statement about the Sask Party’s re-election platform, saying that Scott Moe’s promising a re-elected government with continue showing austerity which the NDP said is not ideal during a pandemic.

“Everyone deserves affordable and safe ways to travel,” he said. “Scott Moe’s tired and out-of-touch plan to privatize STC was a bad idea before the pandemic, but now it's downright dangerous. We can’t afford more of Scott Moe’s cuts and privatization. Saskatchewan people deserve better, and only New Democrats can deliver change.”