The man inside the singular piece of Kraft Dinner? None other than City of Moose Jaw director of engineering Bevan Harlton. And Noodle Boy wants all of you to vote for Pense on Friday, August 14
Aug 12, 2020 6:53 PM By: Randy Palmer 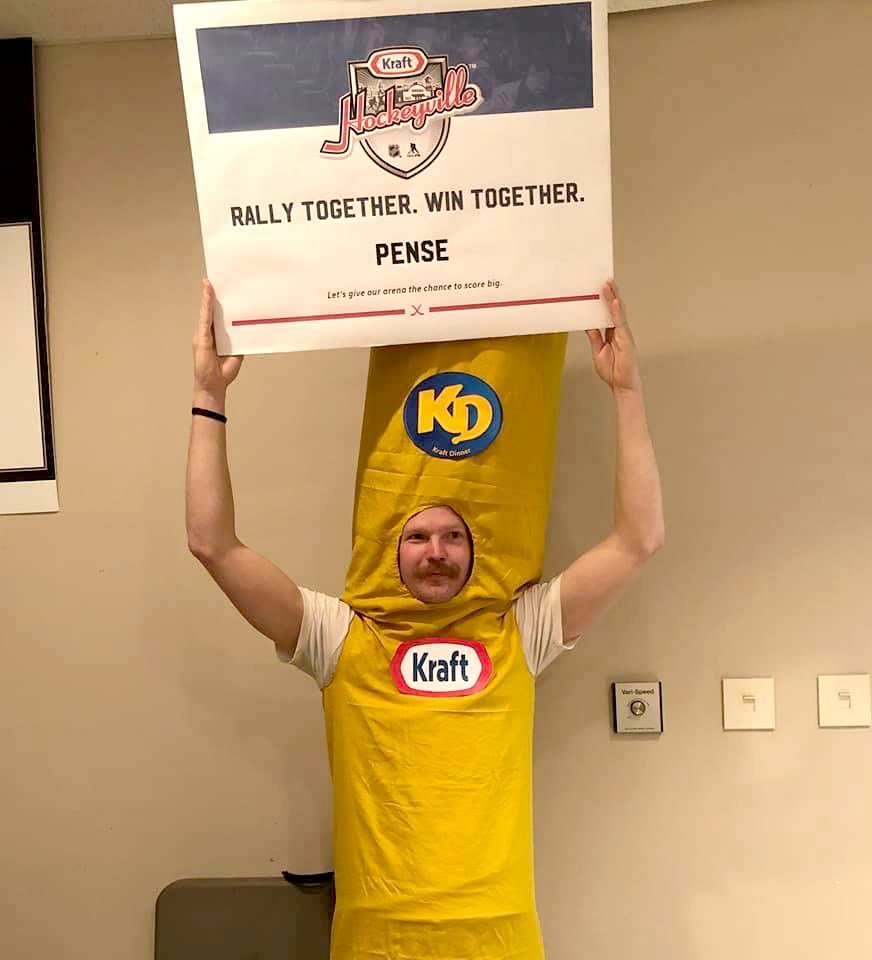 Noodle Boy – aka City of Moose Jaw director of engineering Bevan Harlton – during one of his first appearances earlier this year.
Bevan Harlton was simply sitting around visiting with friends and family a few months ago when the subject of Kraft Hockeyville and the bid to have the Town of Pense win the title came up in conversation.

Harlton, the City of Moose Jaw director of engineering, had seen the failed attempts of recent Saskatchewan communities like Lafleche and Ituna and knew that for the community of 532 located about 30 minutes east of Moose Jaw to have a shot at winning, it would take something special.

“We were just thinking about how to get into the final four, and if we did, how we’d have a chance to win,” Harlton said Wednesday afternoon, a little less than 36 hours until the final vote for Hockeyville begins. “I followed Lafleche and Ituna’s bids reasonably closely because I have a friend in each town, and these last steps of Hockeyville are always heartbreaking because it’s a Saskatchewan community that gives it 150 per cent that gets outdone by some community with 10 or 12 or 15,000 people out east.”

There was little question that finding a way to break that trend was going to take something interesting and maybe even a little bit weird.

Then Harlton’s wife Ariane came up with, quite frankly, one heck of a crazy idea.

Birth of a Legend

“It was a laughable brainchild, my wife drew this kind of noodle costume on a piece of paper and once the cringe factor of seeing that image and how horrendously amazing it was passed, I said to her ‘can you make this’ and she said ‘yeah’ and right away it was like ‘you gotta do it.'”

And that was the birth of Noodle Boy.

A single piece of Kraft Dinner with the KD brand at the top, Kraft logo across the chest and Bevan’s cheery face in the middle of it all, Noodle Boy instantly became a hit and a key part of Pense’s Hockeyville bid.

He would make appearances at the Chase the Ace events designed to raise money for the Pense Memorial Rink, looking to rally awareness and support for the town as bids began to roll into the Hockeyville contest from all over Canada.

Then the Top Four announcement came on Aug. 2, and lo and behold, there was Pense among the quartet of communities in consideration for the $250,000 and an NHL exhibition game.

And with that, it was time for Noodle Boy to ramp things up.

“When they announced the final four, (Pense rink board member) Graeme Crosbie came up to me and said ‘I’m going to run something by you, but just know that it’s going to be a good thing for the town’ and he pointed out that Curtis Lax has this amazing set of video ideas and they just needed Noodle Boy,” Harlton explained. “So I was all for it.”

Lax filmed Noodle Boy doing his thing all over the town, preparing to lead Pense into the Hockeyville voting battle. Ariane took over the video editing, their work went up on Facebook, and all of a sudden Noodle Boy was a provincial sensation.

“So I can’t take any credit. I was just the guy in the suit and they said ‘go run by that elevator’ and ‘go jump over that fence and hang off it’ and that was basically it,” Harlton said with a laugh. “We did it over a couple of nights last week and just jammed it all together.”

The videos have been released daily since on the Pense Hockeyville 2020 Facebook page, drawing hundreds of views as well as television and radio interviews that have furthered the project’s original goal — get people thinking about Pense and ready to vote on Friday, Aug. 14.

“It’s another thing to grab on to after you get the message out of hey, we’re a town, hey, we have a rink and hey, we need this money,” Harlton said. “That will just peter out, and I’m not a social media guy, but that can only go so far. So if you have to dress up as a noodle to help win it, you do it, no two ways around it.”

Should they pull it off, plans for the money are already in place — repairing and replacing the brine system that keeps the artificial ice surface running in the Pense Memorial Rink.

And that’s where Harlton’s moonlighting as director of engineering comes into play when explaining the need.

“The pipes that run beneath the ice have reached the point they’re at the end of their service life, so they’re functioning but they’re beyond warranty,” he said. “The risk there is we fire the plant up and something in the header or a number of the pipes run seam cracks, that’s it, we lose the rink, and that would be devastating to the community.”

The estimate for the repairs is around $300,000, of which the community has raised around $100,000 to this point. As a result, the funds will nicely cover the needed repairs with a decent amount left over for other improvements.

Interestingly enough, that’s been the pure focus of the whole contest.

An NHL game? Just a bonus.

“Around town, we don’t even talk about that, that’s not even really in the dialogue,” Harlton said. “That would be amazing, but the talk around town right now is just finding ways to get people to vote. There’s kids making videos, people putting up signs, everything you’d think you’d see from a small town… There’s no other community in the contest west of Montreal, this would be a time where from Ontario to B.C., there’s no other community that could pull votes for this Pense bid, so we’re hoping that will help us out.”

To support Pense, be sure to log into www.krafthockeyville.ca any time between 7 a.m. on Aug. 14 and 4 p.m. on Aug. 15, follow the prompts and vote for Pense.