Local contractors to be favoured during build of natural gas plant

SaskPower has built commitments into the project where community and area contractors are included in providing content
0
Feb 13, 2020 2:45 PM By: Jason G. Antonio 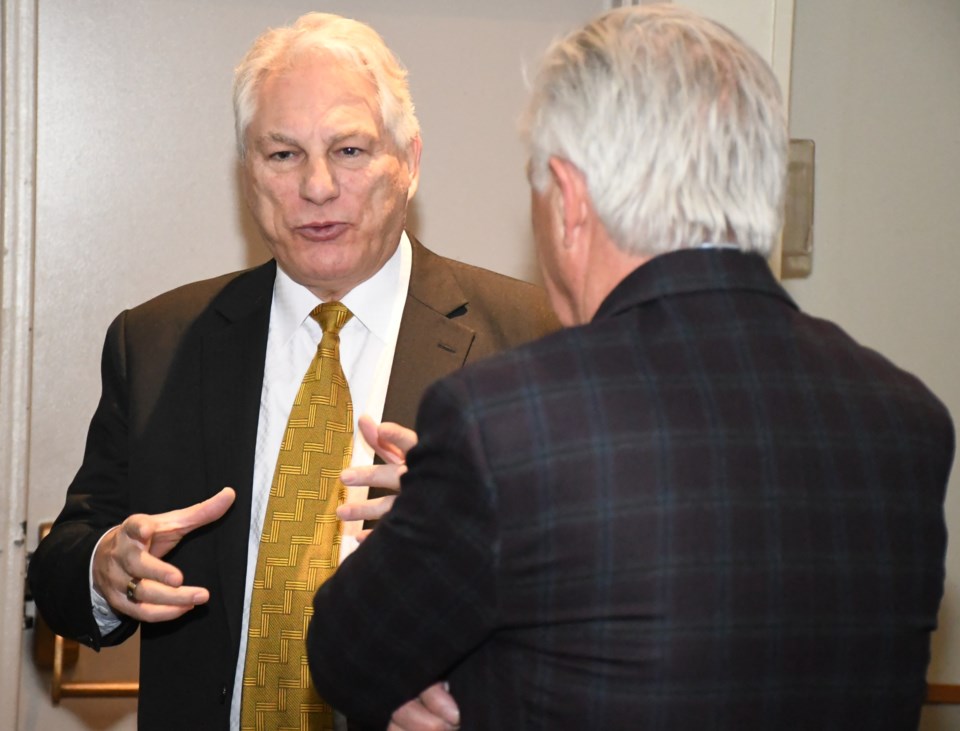 Grant Ring, vice-president (supply chain) for SaskPower, speaks with business leaders before the start of a chamber of commerce luncheon. Photo by Jason G. Antonio

The company chosen to oversee the construction of SaskPower’s natural gas plant will be encouraged to prioritize hiring businesses and contractors from Moose Jaw and Saskatchewan, according to a company executive.

Grant Ring, vice-president (supply chain), spoke to more than 200 business leaders at the Heritage Inn on Feb. 12 during a luncheon organized by the Moose Jaw & District Chamber of Commerce. Ring’s talk focused on the new plant — projected to open in 2024 — and the opportunities the community can expect to see during and after construction.

One question from the floor asked how SaskPower would ensure the winning firm that looks after the project hires skilled employees from the community and the province.

There will be hundreds of millions of dollars worth of materials that will go into building the plant, explained Ring. That leads to concerns about how to build a project without increasing power prices. This is where the engineering, procurement and construction (EPC) process comes in since it is a cost-effective way to reduce the risk of construction.

“But when you do that, you let the vendor make a lot of choices. What we’re saying is, we want the best of the EPC, but we also want more for our people and for our province (on) the economic side besides having the price of the plant be effective,” he said. “So we’re trying to walk that line.”

SaskPower has built commitments into the project where community and area contractors are included in providing content. The Crown corporation intends to sit down with the winning vendor — either Burns & McDonnell Canada Ltd. or  Kiewit Construction Services ULC will be selected later this year — and suggest local contractors.

SaskPower opened its Chinook Power Station in Swift Current this past December. One construction challenge was that while some community contractors received work, others did not since they were too late or didn’t have the qualifications, Ring said. This forced the vendor to bring in companies from the United States.

“We’re happy it was going well, but we missed some opportunities … We plan to do better and we know we can,” said Ring, adding community contractors and businesses should jump on the radar now of the two project proponents. If selected, those businesses will be able to provide items such as wires,  turbines or security. This should provide a "little trickle-down effect" to the community.

Standing up, Mayor Fraser Tolmie explained city administration informed the Moose Jaw Construction Association that this project was coming. The association was encouraged to tell its members about this and encourage them to speak with the proponents so they had a better chance to contribute to the project.

“That’s why we fought for this project. We fought for the businesses of Moose Jaw. That’s what we’re going to do,” he added. “We understand there are some items that cannot be done here in Moose Jaw, but we also have some very unique trades and people.”

It has been great to work with the City of Moose Jaw since Tolmie has been a “super proponent” of the project, Ring said. SaskPower received a positive, top-notch reception from the City of Swift Current when building the Chinook power plant, so the Crown corporation believes it will receive the same level of support from The Friendly City.