Dementia is a progressive degenerative brain disorder with no cure, and the Alzheimer Society of Saskatchewan urges people to be aware of the symptoms
Larissa Kurz Mar 21, 2019 9:00 AM

The ABC's of Dementia lecture at Chez Nous Senior Citizens Home was presented to a group of interested individuals, and detailed the warning signs and treatment options for individuals with a dementia-related disease.

Donna Wilkinson, a representative from the Alzheimer Society of Saskatchewan, delivered the lecture and welcomed any questions about dementia and the finer details of dealing with the infliction.

Approximately 19,000 people in Saskatchewan have been diagnosed with Alzheimer’s or other related dementia, said Wilkinson, and she guessed that three out of four people know someone suffering or affected by the disease. 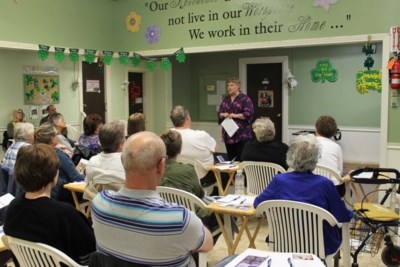 Donna Wilkinson of the Alzheimer Society of Saskatchewan addressed a crowd at the lecture on the ABC's of Dementia.

The main points of the lecture focused on the types of dementia and how to understand their symptoms, and subsequently be prepared to treat them. Wilkinson noted that the first step in diagnosing what seems to be dementia symptoms is by testing for other things, as there are things that mimic early symptoms of dementia that are easily treated — such as a B12 deficiency, a urinary tract infection, or complications with medications.
Wilkinson noted that the most pertinent risk factor of dementia remains age, but there are other factors that play a large role in the possibility of developing a dementia disease. Women are more likely to develop dementia, which could be due to their lengthened age expectancy as well as menopause; genetics also matters, as a family that has many cases of dementia in one generation is likely to pass on the gene to their children.

Other brain related complications — such as repeated brain injuries, medical complications such as stroke, and Down syndrome — can also increase the risk of developing dementia.

Wilkinson’s point was to be aware of emerging symptoms and be diligent in seeking professional help; this is where the ABC's come into play.

“Be aware of the ABC's — so what are the changes in peoples abilities, behaviors, and communication — and look at those 10 warning signs, of what's there, and go to your doctor, because there are things that are treatable rather than not treatable,” said Wilkinson.

A seeming loss in recent memories and inability to perform familiar tasks, a loss of language or disorientation with time and space are all common red flags that should be taken note of to help determine when to begin looking for the onset of dementia.

Wilkinson encourages those affected by dementia, patients or caregivers, to educate themselves and seek support.

“Support groups are a nice place to go because they are people who are going through the same things, are on the same journey, and they may be able to provide other suggestions of things that work for them, that might help you depending on where you are in that journey. it's also a place to know that you are not alone,” said Wilkinson.

She also noted that dementia is a disease that presents itself differently in every person.

More information about dementia can be found at the Alzheimer Society website, and Dementia Hotline, which can be reached at 1-800-263-3367, is always available for anyone with questions about the disease.