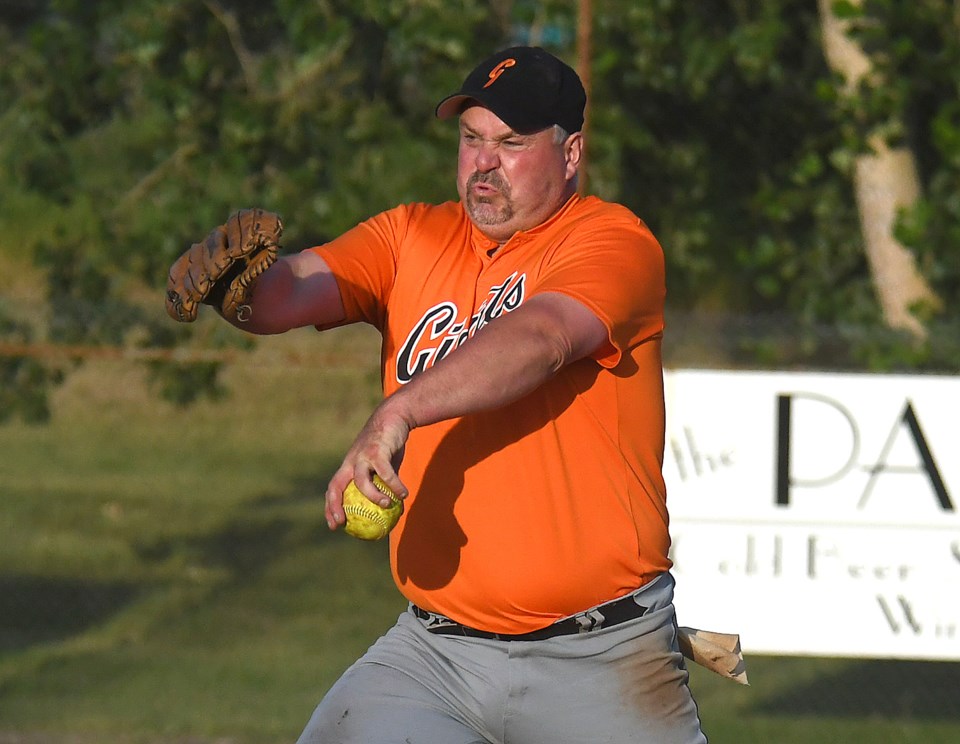 Al Muhle delivers for the Giants earlier this season.
Like the weather, the battle for Moose Jaw supremacy in the Rambler Park men’s fastball league continues to heat up as the season goes on.

Their most recent meeting this past Tuesday at Lyle Helland Ball Diamond offered the most recent example.

Brad Flanagan hit a solo home run in the bottom of the sixth inning, and starter Al Muhle retired the side in order in the seventh to give the Giants a 3-2 victory.

Brett Friesen and Jason Schneider scored the Giants’ other runs in the third inning, but the Canadians would claw those back the next two frames. Bryce Crosbie led off the fourth with a triple and scored, Riley Almasi added the tying run in the top of the fifth.

Muhle allowed six hits on the night and struck out five to earn the win; the Giants had nine hits off Canadians pitcher Dean Holoien, who capped the contest with 14 strikeouts.

Both teams picked up ties on Thursday night in Regina, as the Canadians drew 3-3 with the Standing Buffalo Dakotas and the Giants ended up in an 11-11 draw with the Earl Grey Rockets.

The Giants now sit second in the Rambler Park standings with a 5-2-2 record, the Canadians third at 5-3-1.

The Giants are back in action Tuesday, July 20 when they face the Regina Gold at 7 p.m. at Memorial Field while the Canadians take on the Earl Grey Rockets at 9 p.m.