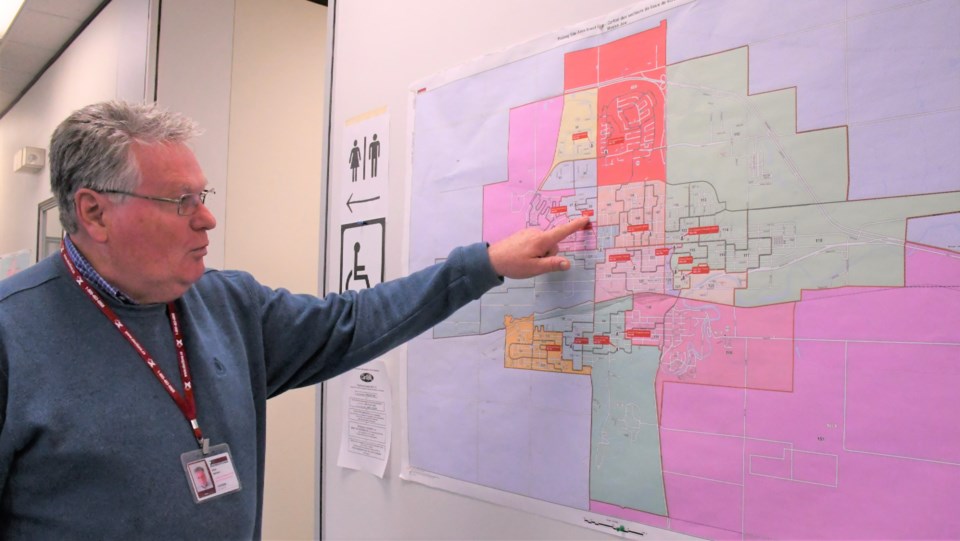 Acting returning officer Brian Harrison talks about where some of the polling stations are in Moose Jaw and how the community is separated into voting sectors. Photo by Jason G. Antonio

Canadians will head to the polls on Monday, Oct. 21 to vote in the 43rd general election, but there is much to know beforehand about the voting process.

Who is eligible to vote? What identification do you need to cast a ballot? Where is the nearest polling station? These are some of the questions that Brian Elwin Harrison, acting returning officer for the Moose Jaw — Lake Centre — Lanigan electoral district, answered during an interview on Oct. 8.

“It’s really exciting to see immigrant people who just got their citizenship come vote for the first time. Their eyes just light up,” he said.

The Elections Act says you must bring two pieces of identification. One piece of ID must contain proof of your residence and address.

However, not everyone has that kind of proof. For example, seniors in care homes can no longer prove where they live since they have no bills, Harrison said. Instead, the administrator will write a letter of attestation saying those seniors live there and can vote there.

The managers and CEOs of Transition House and Riverside Mission can also write letters of attestation saying their residents are eligible to vote.

Some pieces of identification you can bring to vote include a driver’s licence with your picture and address; any document issued by the government; your voter registration card; and anything with your present address, such as a utility bill.

You should receive a voter registration card in the mail. It will tell you where to vote on Oct. 21. You can also search for your polling station online.

Residents who are concerned about whether their address is up to date or want to register can visit the elections office from now until 6 p.m. on Oct. 15. These revisions can also be made over the phone or by mail.

Advance polling occurs from Oct. 11 to 14 from 9 a.m. to 9 p.m. There are five locations in Moose Jaw — Sacred Heart School, Sunningdale School, two stations at Palliser Heights School, and A.E. Peacock Collegiate — where voters can cast their ballot ahead of Oct. 21.

“Advance polling has become so popular that it was extended by one day and to 12 hours a day, plus nine extra places (in the riding),” Harrison said.

There are 688 volunteers who will help at the 72 polling locations throughout the riding, which will be open on Oct. 21 from 7:30 a.m. to 7:30 p.m. There will also be four mobile polling stations that will go to seniors’ homes that day.

The electoral district is more than 32,000 square kilometres in size. It extends from about six kilometres west of Regina to west of Moose Jaw and then to about 10 kilometres south of Saskatoon to the Lanigan area.

“To predict how the vote turnout will go is beyond my realm,” chuckled Harrison. “I would love to see 100-per-cent turnout. I would encourage everyone to vote … .”

As a former teacher of 30 years, Harrison recalls taking his class to the legislature to meet with speaker Glenn Hagel. Hagel told the students that Canada changes its governments without the loss of life since there are no revolutions and very little violence.

Harrison added that voting is important since it is the responsibility of every Canadian citizen to do so. After all, if you don’t vote, you can’t complain for the next four years.