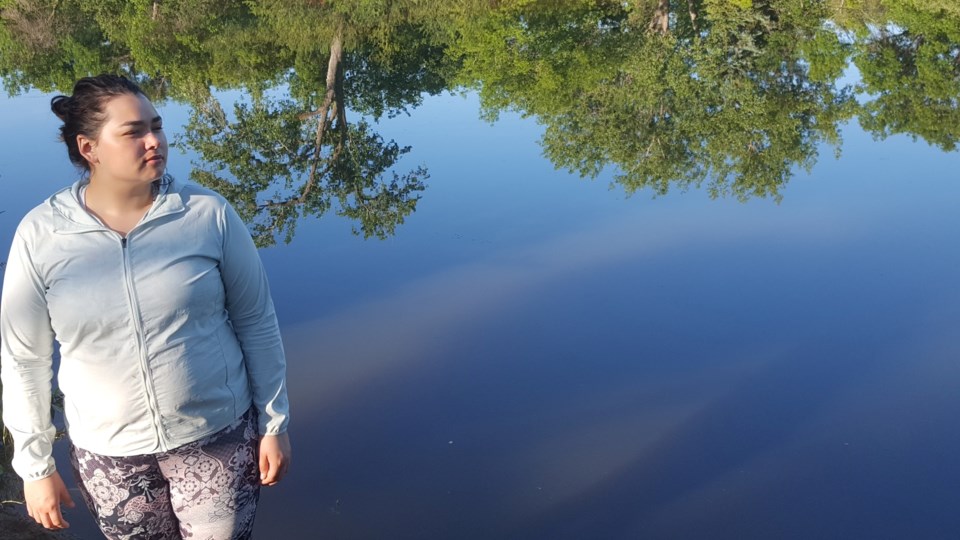 Hannah Tooktoo took a break out in Wakamow Valley before continuing on her journey across Canada for suicide awareness. (supplied)

Hannah Tooktoo first embarked on her cycling tour across the country with a heavy message to share about the too-high suicide rates that Indigenous communities are suffering from in Canada.

“People are very idle and they're not getting the injustice and trying to help us figure out a way to heal and navigate,” said Tooktoo. “We're all living in this land we call Canada; it's our home and we should be able to live on it and be able to help each other out.”

Suicide disproportionately affects Indigenous and Inuit communities, with suicide rates among Indigenous populations three times higher than any other population in Canada.

The lack of supports, services and resources available to help the situation is something Tooktoo, 24, is adamant needs to be addressed immediately.

“I'm trying to wake people up, and also wake up the government, because we're losing people now and we need action now,” said Tooktoo. “It shouldn't be normalized, and we know that.”

“I'm trying to get people to sort of move forward and deal with the [issue]. There's all this talk of reconciliation and I'm all about that ‘reconcili-action,’” she added. “Let's get past all those pretty words and actually put some work into it.”

Having been deeply affected by suicide in her own life, Tooktoo began searching for a way to deal with her grief and begin healing. That path led her to this journey, which she has embarked on for herself and for those who are also in need of healing.

“It's really humbling, to be able to spread this awareness,” said Tooktoo. “I'm hoping that [those who meet me] start their healing path or they get a little bit out of this too.”

Tooktoo is biking from Victoria, B.C, to Montreal, Que. and is taking time to stop in the communities along her path and hear their stories, while also sharing her own.

Her journey began with the B.C. mountains ahead, symbolizing the initial struggle that requires extremely hard work before things smooth away into easier paths — for both her and her cause.

Tooktoo spends several hours a day on her bike, which she uses as a reflective time for herself to consider her message and how to share it with others. But when she reaches a community, she opens herself up to answer any questions directed her way, and to listen to people’s experiences.

“I'm here to humanize this and to really get people to care,” said Tooktoo.

The suicide epidemic is an issue that connects with a number of other socioeconomic problems, including housing needs, income concerns, food insecurity, and poverty.

“All of these different things, they're all interconnected, and so I try to find ways to make people understand because it's such a complicated subject,” said Tooktoo.

The welcome that she has received by communities along her journey so far is inspiring, said Tooktoo, and she is grateful for all of the continued support. Her journey has embodied the spirit of healing and becoming stronger, both emotionally and physically.

“It's just a lot of emotions, on this journey. Sometimes I'm on my bike and I'm like crying like, 'people are actually doing this for me,'” she said.

Tooktoo took about a month to train for the grueling 4,395-kilometre trip, and is more than pleased with her progress so far.

“I'm training as I go, my legs are getting stronger, my endurance is getting better,” said Tooktoo.

She is planning on reaching Montreal on Aug. 8 and is currently on pace to achieve that goal — passing through Moose Jaw on July 9 on her way eastward to Regina and beyond.

Tooktoo is documenting her trip through her Facebook page, Hannah’s Journey Across Canada, and her Twitter, and she is always looking forward to meeting new people in every place she stops.

“I hope that people take something away from it. I've been received really well and I'm so touched that people actually support what I'm doing,” said Tooktoo.