The Festival of Words hosted an interview between writer Paul Seesequasis and journalist Nelson Bird about preserving Indigenous photos and history
Jul 16, 2020 6:24 PM By: Larissa Kurz 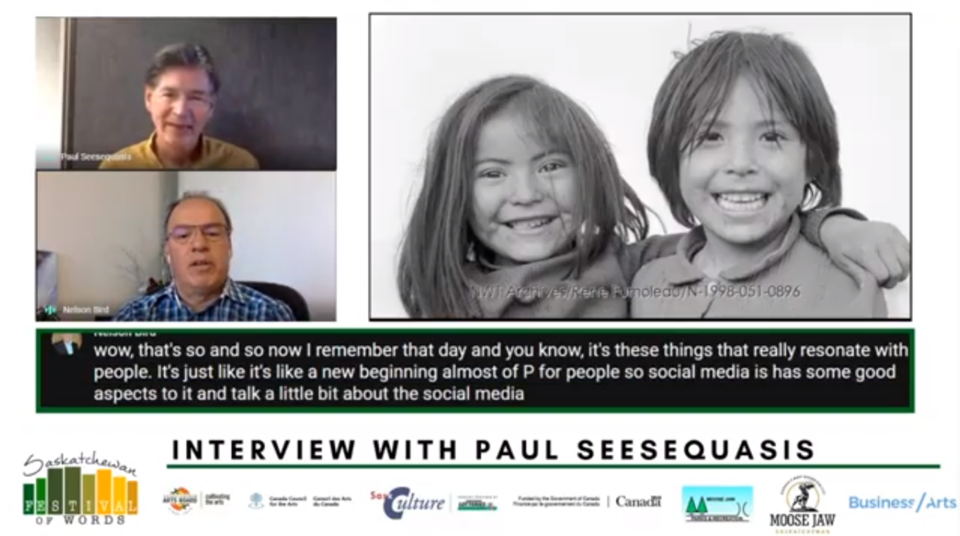 Author Paul Seesequasis (top) in conversation with local TV personality Nelson Bird (bottom), while a selection of photos from Seesequasis’ book Blanket Under the Midnight Sun circulate to the right.

Journalist and writer Paul Seesequasis joined fellow journalist and former host of CTV’s Indigenous Circle Nelson Bird for a live stream interview at the Festival of Words, resulting in a conversation about the importance of preserving Indigenous history using new mediums.

Seesequasis is a kind of expert on utilizing new ways to connect Indigenous communities to their history. As the curator of the Indigenous Archives Photo Project, which spans across several platforms including social media and print, Seesequasis has spent the last two years exploring the stories behind a collection of archival photographs of Indigenous day-to-day life.

That collection, titled Blanket Toss Under Midnight Sun, was published in 2019 and features photos from Indigenous nations all over Canada dating from the 1920s to the 1970s that Seesequasis found in national and provincial archives collections.

The project began in 2015, and as Seesequasis began posting the images on social media, he started seeing people recognizing family members and sharing stories.

“I never expected it to have the trajectory it's had, the momentum,” said Seesequasis. “The response was phenomenal, people responded on social media saying ‘that’s my auntie, that’s my uncle,’ and it just grew from there.”

From there, he began the journey of discovering the stories behind each photo and compiling it into a nonfiction collection.

“These stories kind of began to develop with these photos and it really was a wonderful combination of the image and the voice coming back together,” said Seesequasis. “What really surprised me was how people were willing to share their stories with me [and] from pretty early on, I really tried to let the people from the communities, let their voices speak for themselves. I tried to keep myself out of it as much as I can.”

Seesequasis spoke briefly about how he chose which photos to include in the finished draft of Blanket Toss Under Midnight Sun, which partially relied on the timing of collecting the stories but also on the content featured in the photographs.

“There’s always been an issue with our objects, whether they're sacred or day-to-day, being put under glass or with a tag beside them saying what they are, where people see them,” said Seesequasis. “That’s a part of colonial history all over the world, where the colonizer takes what they see as ‘other’ or exotic and puts them under the glass.”

His collection, to avoid this problematic representation of Indigenous culture, instead focuses on the daily experience of Indigeneity and the ways that nations pushed back at colonization events like the Indian Act, the Eskimo tags and residential schools.

“I very much wanted day-to-day life, living off the land or children playing, just the contemporary life at that time. I really avoided anything to do with ceremony or anywhere I felt the camera was invasive of anything sacred, and I avoided to a great extent any kind of traditional powwows and things that would fit an outside gaze,” said Seesequasis.

For Seesequasis, putting stories to the photographs and returning them to their communities has been an incredible step forward in preserving Indigenous oral history in a new way.

He already has another photography book in the works, he admitted, and said that he hopes the overall project might potentially inspire an Indigenous archive collection in the future.

“I hope it's raised the appreciation of photography and the framing of positive Indigenous images as something that we can learn from,” said Seesequasis. “I hope we can continue to see the archives be democratized and decolonized and be maybe more of a visual reclamation, if you will, so that these photograph histories of our ancestors really belong to us.”

The Festival of Words continues until July 19, with a full schedule of events available here.

Stay tuned for coverage of the festival as it progresses through the week.