Organizer Sarah Clarke credits help from friends, family, and student for the event's success
Larissa Kurz
Jun 21, 2019 9:40 AM
Previous Next
1 / 1 It was an impressive crowd that gathered for the inaugural fundraiser event. (photo credit: Lori Meyer)
Expand
Previous Next

Over 100 people signed up for the first Alzheimer's 5K or 10K Run/Walk, taking to the trails in Connor Park on June 15 for an important cause.

Organizer Sarah Clarke was amazed to see so many people come out and participate, volunteer, donate, and sponsor her event.

“The terrain is a little difficult, but everyone really enjoyed the scenery. It's so beautiful down there,” said Clarke. “I feel like it was very successful and a lot of people supported it.”

She estimates the proceeds raised were over $5,000, all of which is going directly to the Alzheimer’s Society of Saskatchewan.

The idea came from Clarke’s grade eight classroom at Sunningdale Elementary School, when she posed her students with an assignment to create a project they were passionate about.

Two students actually went forward and planned their fundraising events — Morgan Capili raised over $3,000  for ALS research with her own charity run, and Makena Simmons raised over $2,000 for the Sandra Schmirler Foundation with a beef-on-a-bun fundraiser. 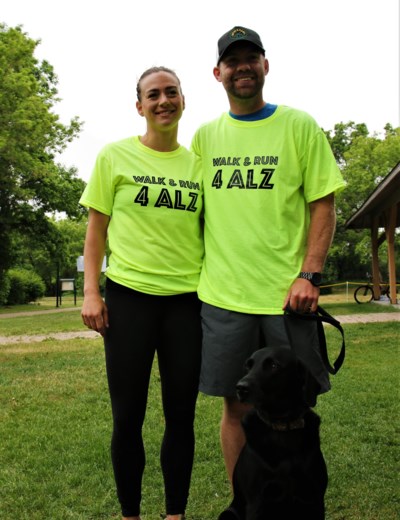 Organizer Sarah Clarke (L) is already planning next year’s event. (photo credit: Lori Meyer)
Her students’ dedication inspired Clarke to put on her own event. The cause she chose is one near to her heart, as her grandmother was diagnosed with Alzheimer’s and recently passed away.

“It's a hard disease and you can't do anything about it, but as long as I can try to give back and do what I can and raise money for Alzheimer's research, I feel like it was a good fit for me,” said Clarke.

Many people donated because they were unable to make the event, and Clarke saw how this cause affects so many people in the community.

“A lot of people actually reached out and contacted me, saying that they have had family members go through it or are there currently going through it with a family member, a loved one,” said Clarke.

This is the first time Clarke has planned a run such as this, and while it was a daunting and hectic task, she’s already talking about planning next year’s fundraiser.

“It's definitely something I want to keep going and I want to keep growing it, so we could keep this event going up to about 200 participants. That would be my ultimate goal for next year,” said Clarke.

She encouraged people to keep an eye out for details in the future, because the Alzheimer’s Walk/Run will be returning in Spring 2020.