The first in-person reading session at the Festival of Words since 2019 took place at the Mae Wilson Theatre this evening
Jul 16, 2021 8:46 PM By: Larissa Kurz 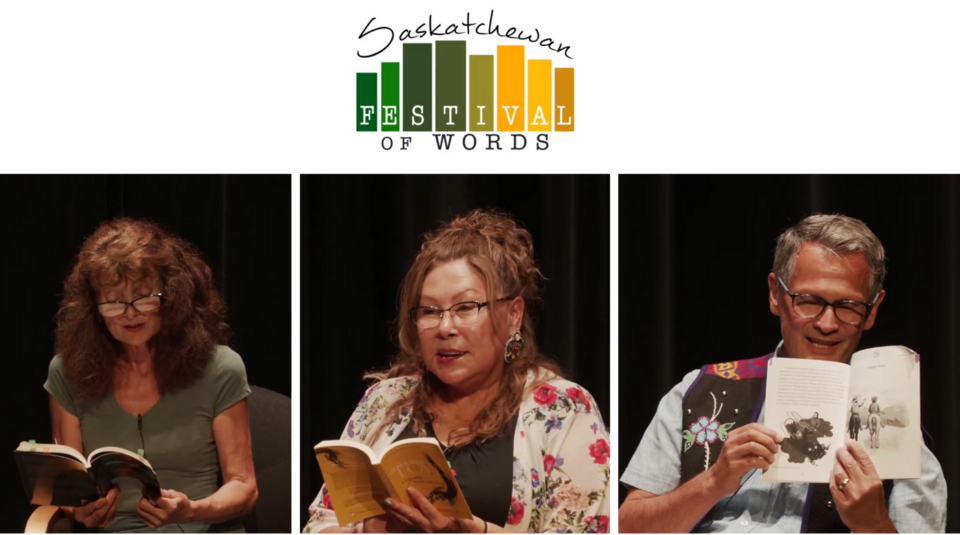 L-R: Gillian Hardng-Russell, Bevann Fox and Cort Dogniez came together for an in-person reading session at the Festival of Words.(screenshot)

In an exciting shift back to what the Saskatchewan Festival of Words is used to being, a panel of Saskatchewan authors gathered together at the Mae Wilson Theatre for an in-person event honouring their works nominated for the Sask Book Awards.

Gillian Harding-Russell, Cort Dogniez and Bevann Fox joined moderator and guest author Angie Abdou for a reading session and short Q&A with a live — and virtual — audience in attendance.

All three authors are nominees for this year’s Sask Book Awards, which is just one way in which their work is connected.

Harding-Russell read several descriptive, nature-inspired poems from her newest compilation titled Uninterrupted, which she described as “speculative and dystopia, but written out of a love for what could be lost.”

Métis author Dogniez shared an excerpt from his debut novel Road to La Prairie Ronde, which tells the story of his great-grandfather’s journey to what is now known as Round Prairie.

Road to La Prairie Ronde is aimed towards readers in the grade four age, because he felt, as an educator, that there was a need for literature talking about the Métis culture for that age group to explore.

“One of the sad aspects of our society is that we don’t know a heck of a lot about Métis people [and] with students, many will be taken to Batoche and they then see us through that lens of the Resistance,” said Dogniez. “And I wanted to give students an opportunity to hear about Métis people, but to humanize us, to make us real [and] to know that we didn’t just disappear after the Resistance.”

To close out the session, author Bevann Fox also read an excerpt from her novel Genocidal Love: A Life After Residential School, a fiction novel based strongly on Fox’s own life.

She said she originally wrote the book as a first-person narrative, with herself as the intended main character, but later changed to a third-person perspective with a fictionalized character.

During the Q&A, Fox affirmed that her purpose in sharing her story through writing Genocidal Love was to simultaneously offer education to those learning about the effects of residential schools and comfort to those who’ve also had the same experience.

All three authors agreed that receiving a nomination from the Sask Book Awards was an honour, whether it be the first or hundredth time, and thanked the Festival for inviting them to take part in the 25th anniversary event.

The Festival of Words continues throughout the weekend, including the Saturday night concert at the Mae Wilson Theatre in Moose Jaw featuring Regina-born country-rock artist Val Halla, and reading sessions and panels on Sunday.