Brownlee lost its historic church in a fire this past weekend, one of the last buildings that was built when the town was founded
Jun 18, 2020 11:15 AM By: Larissa Kurz
Previous Next
1 / 1 Brownlee church went up in flames on the afternoon of June 13. (photo submitted by Janice Parker)
Expand
Previous Next

The town of Brownlee lost a historic building to fire on June 13, as the original town church burned down in the midst of a heavy Saskatchewan wind.

Volunteer firefighters from both the Eyebrow and Tugaske detachments attended to the blaze, which is believed to have started due to a tree branch catching a nearby powerline and igniting the roof of the church building.

“It was one of the big evergreens on the side, it caught and it just went like a torch,” said Don Baum, who owned the old church and was using it largely for personal storage.

Baum purchased the property from the United Church of Canada in 1996, after the pastoral charge closed the church’s doors to worship.

Originally built in 1910, the church itself was over one hundred years old. It was one of the first buildings to appear in the town of Brownlee when the village was first incorporated in 1908. It was used as a place of worship for both Methodist and Presbyterian congregations, according to local amateur historian John Howard, until it came under the United Church’s charge in 1925.

The church avoided a fire that ravaged Main Street in 1929 and demolished many of the other historical buildings from the town’s beginnings, including the general store and the hotel. It was moved onto a new foundation in 1955, when the siding and shingles were redone, but otherwise, the church itself remained original. 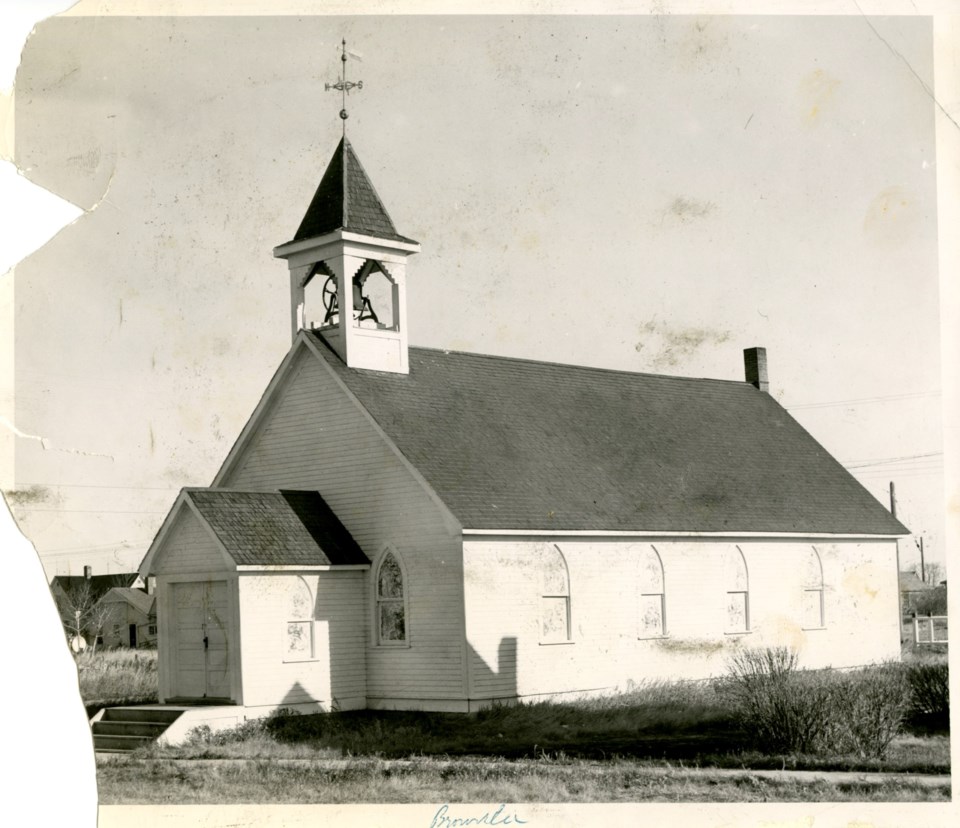 The United Church in Brownlee, pictured sometime in the 1950s. (Moose Jaw Times-Herald / courtesy of the Moose Jaw Public Library Archives Department)
The building is now entirely gone, said Baum, leaving only the basement and the chimney standing in the foundation.

Volunteer firefighters were able to contain the blaze from spreading to the trees and residential homes that neighboured the church building, even in spite of the heavy winds carrying sparks and burning ashes throughout the area.

“The volunteer firefighters were great,” said Baum. “They had trucks and people snubbing out hot ashes, trying to keep it under control, and they did an excellent job.”

Brownlee is located about 58 kilometres northwest of Moose Jaw, on Highway 42.