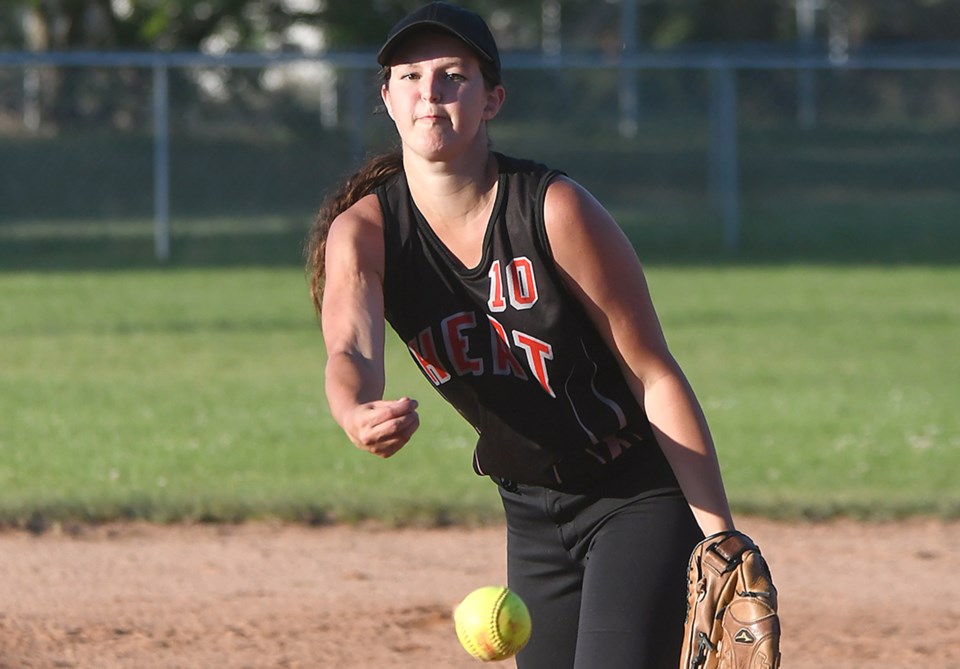 Megan Auger was the starting pitcher in the Heat win over the Colts on Friday.
It seems only fitting that with temperatures what they are, the Heat would find themselves putting up plenty of runs in Senior Ladies Fastball League action this past week.

The Heat took a 10-8 win over the Hustlers and downed the Colts 12-9 in contests at Caribou Heights but couldn’t come away with a perfect record out of their busy seven days, dropping a 13-1 decision to the Assiniboia Aces.

In other action, the Colts tied Assiniboia 4-4 and the Hustlers took a 10-0 win over the ice.

In the first game of the week on Tuesday, July 13, Raina Peterson and Sarah Feeley scored runs in the bottom of the fifth inning to overcome a 4-2 deficit and set the the stage for the eventual tie.

The Colts’ Nicole Whitehead reached base four times and scored a pair of runs, Peterson crossed the plate twice.

Mikayla Swallow pitched for the Colts, Brianne Welder for the Aces.

The late game on Tuesday was another close one and featured duelling huge innings.
The Hustlers struck first, blowing open a low-scoring game with seven runs to take a 7-1 lead. The Heat got all that back the next inning, scoring eight runs on 10 hits to go up 9-7.

Jamie Kabanuk and Megan Auger pitched for the Heat; Rachelle Grado, Adrianna Phillips and Rusu for the Hustlers.

Rusu and Erin Hetherington combined to no-hit the Moose Jaw U19 Ice in the lone game on Wednesday, allowing only four base-runners in the four-inning mercy-rule win.

Hustlers Kianna Avery, Penny Barker and Megan Sapp each reached base three times and scored a pair of runs.

Maddie Thul and Kalena Adrian pitched for the Ice.

In Thursday’s lone game, Peterson and McKenna Brandt each scored three runs as Assiniboia rolled to the mercy-rule win, scoring seven runs in the top of the fourth.

Michelson had the Heat’s lone score.

Nursing a 5-3 lead on Friday night, the Heat scored four runs in the fourth and three in the fifth to go up 12-6 and hold on to win the high-scoring contest.

The Colts had two runs from Kirah Brown.

Auger and Kabanuk combined to earn the win, Jade Waiting and Kim Niethercut pitched in the loss.