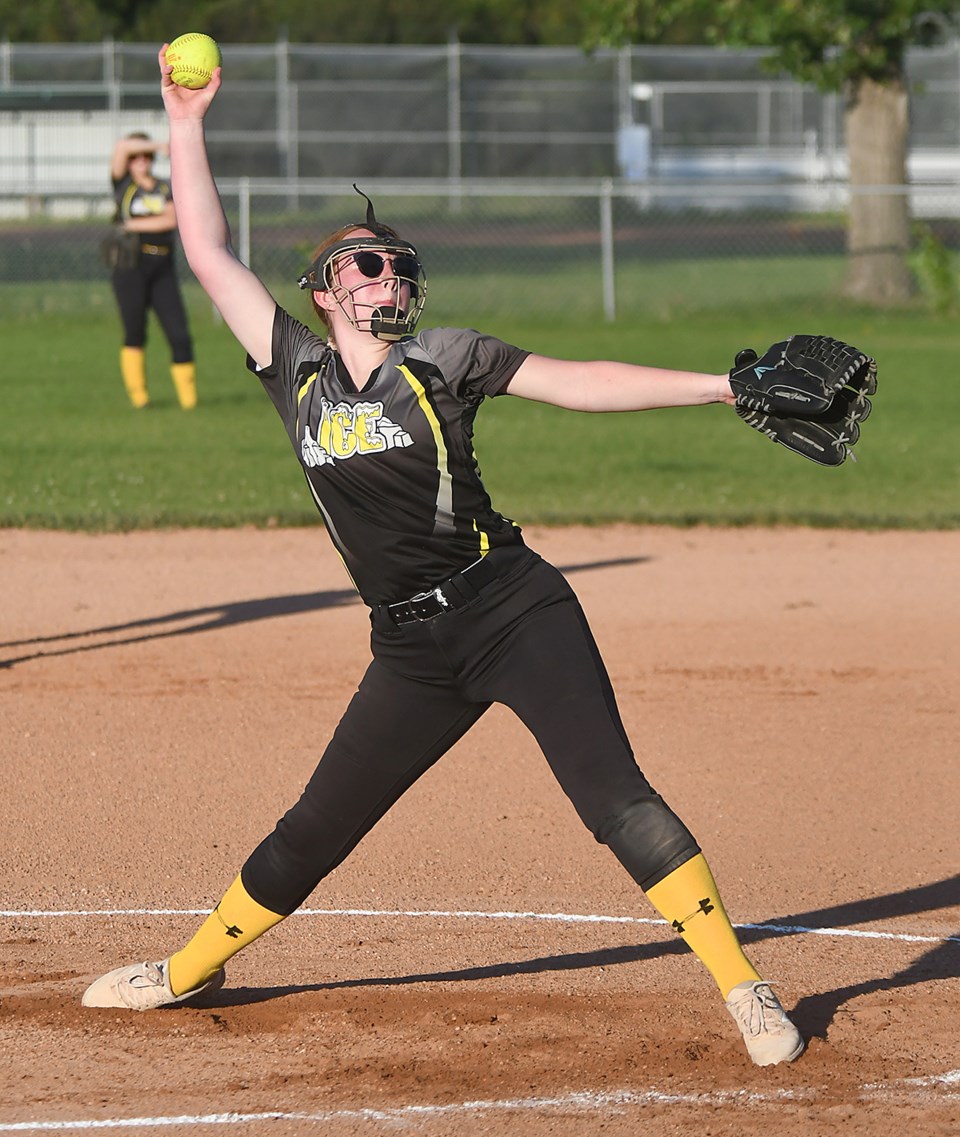 Rainy Volk delivers for the Ice earlier this season.
The Moose Jaw U19 Ice came close to finding a win in Moose Jaw Senior Ladies Fastball action on Thursday night, but in the end came up just short in their second of two games on Thursday night.

The Heat opened with a 13-2 victory in the opening contest at Caribou Heights before the Hustlers rallied for seven runs over the final two innings to take a 16-10 win in the nightcap.

The Ice are back in action for a doubleheader with the Assiniboia Aces and Park Hotel Colts on Tuesday, while the Heat and Hustlers face of in the second game on Wednesday.

Amanda Schmidt finished a home run away from the hitting for the cycle as the Heat rolled to their commanding win.

Schmidt hit a second-inning single, third-inning triple and fourth-inning double before flying out to short in her final at bat. All told, she’d score three runs and knock in another.

Shayla Freeman also had a strong showing at the plate for the Heat, reaching base three times and scoring three runs while recording two RBI. Bailey Mackie made the best use of some timely hitting, going 2-for-4 with a pair of singles and bringing home three runs. Ashley Blair also crossed the plate twice and had two RBI.

The Heat led 7-1 after three innings before sending 10 batters to the plate in the fourth and scoring six runs to put the game well out of reach.

Bryn Giddings singled home Vanessa Knox with the first run for the Ice in the opening inning, and Maddy Thul tripled before coming around to score their other run in the fourth.

Thul and Rainy Volk saw action in the circle for the Ice, Schmidt and K.C. Power allowed only six hits between them for the Heat.

You won’t find many games more back-and-forth than the second match-up of the evening.

The Hustlers built a 5-0 lead through the first two innings, only to see the Ice rack up six runs of their own in the third and fourth to go ahead 6-5. The Hustlers weren’t done yet, scoring four runs in the fifth to go up 9-6, but the Ice batted around in their half of the inning and put up another four-spot of their own for a 10-9 lead.

That would be the last time the Ice would score, though, as the Hustlers scored two in the sixth and five in the seventh to secure the win.

Taylor Logan reached base four times on three singles and an error, scoring three runs and a pair of RBI for the Hustlers; Krissy Rusu went 3-for-5 and crossed the plate three times while Rachelle Grado went 2-for-5 with three RBI.

Abby Shiers reached base in all four plate appearances for the Ice and scored three runs, Madison Kemp crossed the plate twice.

Volk and Knox pitched for the Ice, Adrianna Phillips and Rusu saw action from the circle for the Hustlers.