Two men who suffered a cardiac arrest here in Moose Jaw have shared their stories, to help raise awareness about knowing the symptoms of a heart attack
Feb 19, 2021 2:30 PM By: Larissa Kurz 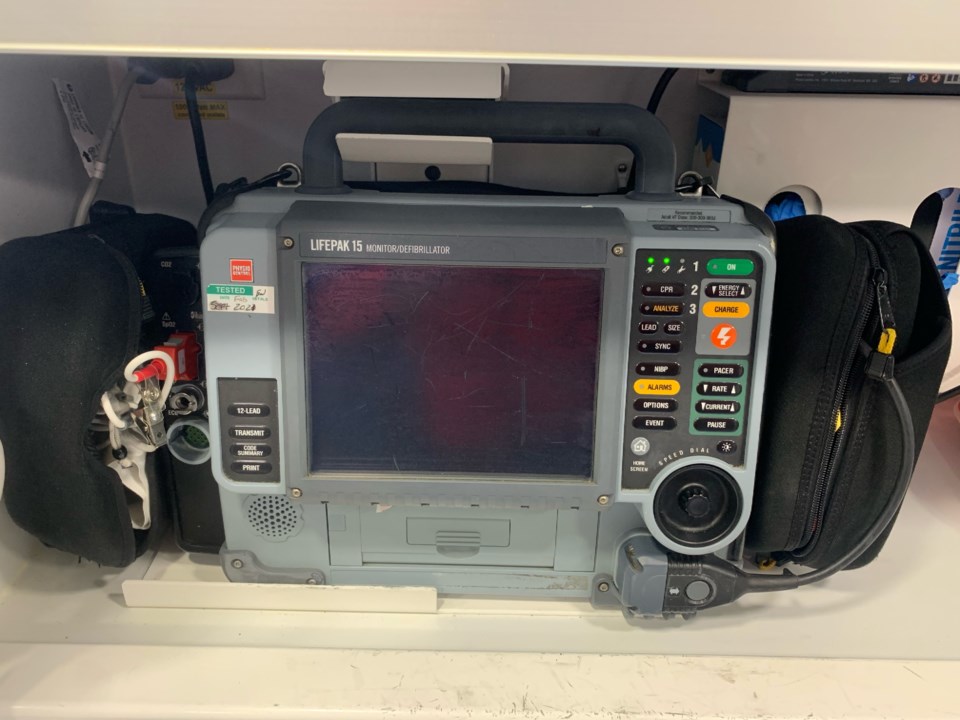 Paramedics will utilize a defibrillator like this one when responding to emergency calls involving a cardiac arrest, but bystanders are encouraged to also use an automated external defibrillator (AED) if it's available.(supplied: Moose Jaw & District EMS)

Every year, Moose Jaw & District Paramedics host a heartwarming event to reunite cardiac arrest patients with the paramedics who responded to their emergency calls in the city, to celebrate the success and put a spotlight on heart safety for the Heart and Stroke Foundation.

An estimated 35,000 cardiac arrests occur in Canada each year, the majority of which take place outside a hospital and require an emergency paramedic response.

The stories of cardiac arrest survivors can sometimes be harrowing to hear, but first-hand experiences are often one of the most effective ways to understand the important details of a successful emergency response.

In place of the usual in-person celebration this year, Moose Jaw EMS has invited two cardiac arrest survivors to share the stories of their heart emergencies from this past year, to help highlight some of the most important things everyone needs to know about responding to a cardiac incident.

B.C. resident Robert Andres was on a short vacation with his family, enjoying a two-day stay in Moose Jaw this past August. They were taking in the sights and experiencing the comfort of the Temple Gardens Mineral Spa, when Andres suddenly collapsed in the pool with little warning.

“I hadn’t been in the water more than five minutes and the next thing I remember, I’m laying on the edge of the swimming pool and they’re trying to resuscitate me,” said Andres. “I don’t even remember it happening. I didn’t even see it coming.”

Andres had suffered a cardiac episode, and the pool’s lifeguard responded immediately to save his life — beginning with resuscitation and CPR, followed by the use of the automated external defibrillator (AED) the spa and hotel has on-site.

Andres was reportedly shocked twice using the AED before paramedics arrived, giving Moose Jaw EMS several extra minutes for their response. After stabilizing Andres, he was transported straight to Regina General Hospital, where his pacemaker device was replaced by cardiac experts.

“I can’t tell you whether there was a problem with my old heart pacer or what, but they did put a new one in,” said Andres.

Andres spent a week in the hospital before he returned home to B.C., extending his family’s initial trip by several days.

“I’m familiar with every hospital from [Regina] to Kelowna,” he joked.

The details of his cardiac incident are vague for Andres, as he doesn’t remember much — which is very common for cardiac arrest patients who fall unconscious. What he does remember is the prompt response from those who witnessed his collapse — the trained lifeguard on duty, the spa staff and the paramedics — which he said played an incredibly important role in helping him survive that day.

“All the credit goes to those guys, because they were heroes,” said Andres. “If it wouldn’t have been for them, I wouldn’t be talking to you right now. They did one heck of a job. I can’t say enough good about them, let’s put it that way.”

He said he has seen a marked improvement since receiving his new pacemaker and hasn’t experienced any unusual symptoms since. An example of the medication that paramedics provide to cardiac patients following their emergency response. . By (supplied: Moose Jaw & District EMS)

An emergency at home

One day in April, Moose Jaw resident Robin Bailey found himself feeling unwell all throughout the day. His back and shoulders felt tight and uncomfortable, so he decided to head outside for a walk to get some fresh air.

“I wasn’t feeling all that hot and when I got outside, I started profusely sweating. That’s when I knew I was in trouble, [but I didn’t] know what kind of trouble,” said Bailey.

After calling his wife for a ride, Bailey collapsed inside his house very shortly after arriving home. After contacting 911 and calling a family friend, Bailey’s wife performed CPR on her husband following instructions from the emergency operator over the phone, with the aid of her friend, until paramedics arrived on the scene.

Bailey was transported to the Dr. F.H. Wigmore Regional Hospital in Moose Jaw, before being airlifted to Regina General Hospital by STARS, where he woke up two days later and began his recovery. He said he was very pleased with the level of care he received throughout the whole experience, and he’s feeling much better.

“Everything was excellent, from EMS to even STARS and the hospital staff both here and in Regina,” said Bailey.

When thinking back on the experience, Bailey doesn’t remember having any chest pains, which is the most commonly recognized symptom of a cardiac arrest. This was also his first heart-related emergency, he said, and it caught him off guard.

“This was out of the blue, but there is a little bit of history with the heart in the family,” said Bailey. “I just never thought anything about it.”

For Bailey, he stressed how important it is to know the symptoms of a cardiac arrest, as his wife’s quick recognition and response is what gave paramedics enough time to arrive and help save his life.

“It’s extremely important [to know] and of course, everybody’s different. A lot of people have chest pains, where I never had that,” said Bailey. “The symptoms that a person could come across [are important].”

So what do paramedics want you to know?

Both Andres and Bailey were lucky to have well-informed and quick-responding bystanders who jumped in to help during their emergencies, but it's a situation that many people are admittedly not always equipped to handle.

Moose Jaw paramedics respond to tons of cardiac-related emergency calls every year, said local advanced care paramedic Corey McNeice, but for instances that progress to a cardiac arrest, the chance of survival tends to be much lower for those patients.

According to the Heart and Stroke Foundation, the survival rate for patients who have a cardiac arrest outside a hospital is less than 10 per cent — but that rate can increase significantly with the intervention of a knowledgeable bystander. 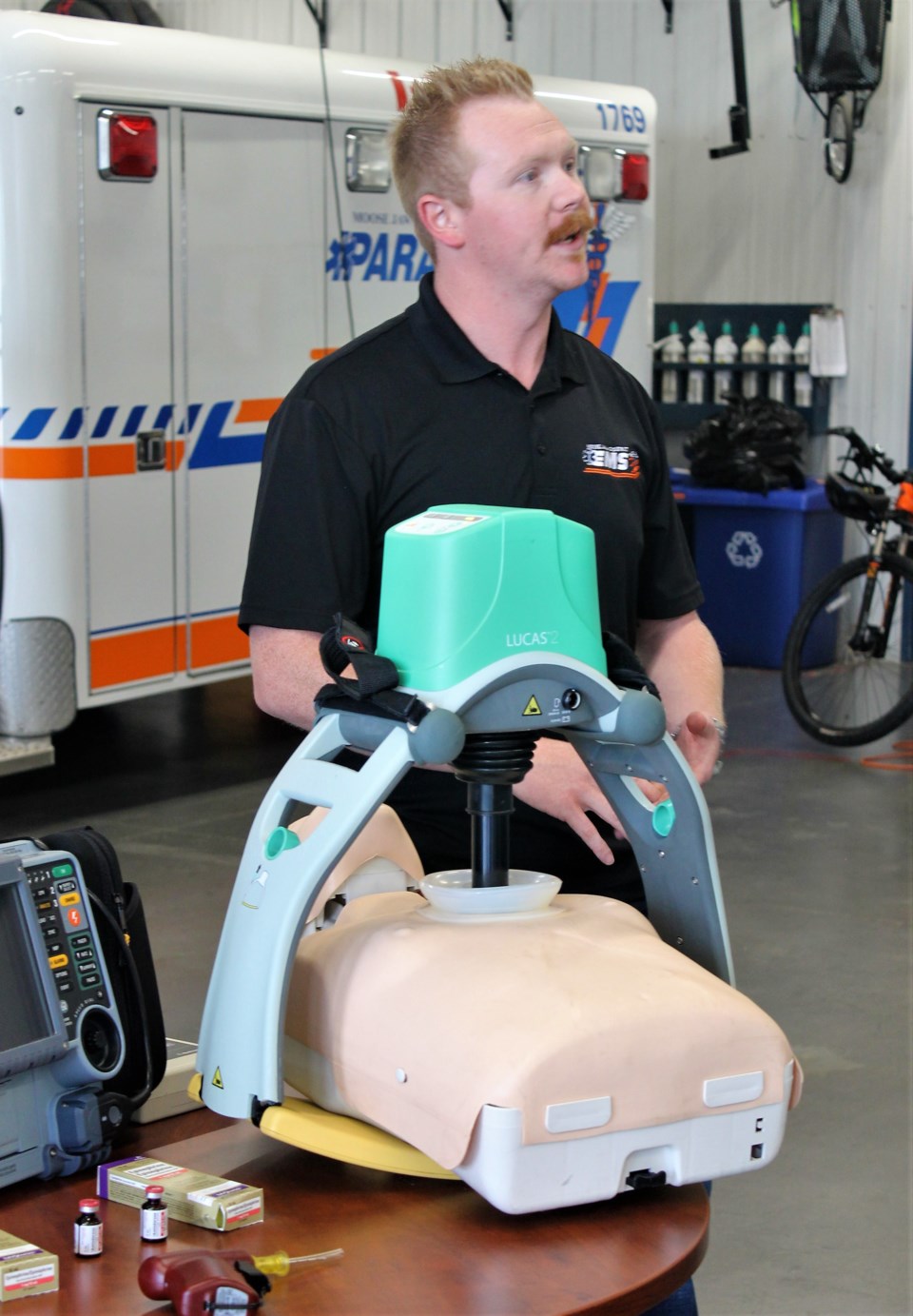 Advanced care paramedic Corey McNeice, providing a demonstration of the LUCAS device, which is used to continue chest compressions during transport on cardiac-related emergency calls. / (photo by Larissa Kurz)

McNeice said that it's incredibly important for people to be able to recognize the symptoms of a cardiac episode, because it's the first step in the emergency response that could save lives.

Symptoms of a heart attack are more than just chest pains, and can sometimes come and go throughout the day, like what happened to Bailey.

“If you have a family member or a friend or coworker who starts experiencing the sudden onset of nausea, vomiting, pain in their jaw or neck or their back, tight pressure in their chest, sudden shortness of breath — things like that are the main symptoms of a heart attack,” said McNeice. “You can also have feelings of indigestion or extreme fatigue that come on as well.”

Not all cardiac events see patients fall unconscious, but in many cases, so it's important to be able to recognize other symptoms leading up to that moment.

“There’s also this thing called agonal breathing, which is a non-effective type of breathing that people often mistake for regular breathing,” said McNeice. “And that’s when you need to feel and see if they have a pulse and start CPR if they’re unconscious.”

Once you do notice symptoms, the next step is to activate the emergency response team — or, in layman’s terms, call 911 and get paramedics on the way. Then, continued McNeice, start administering CPR methods and ask if there is an AED in the building.

Paramedics encourage bystanders to perform hard and fast chest compressions during this stage, to keep oxygenated blood flowing through the body until paramedics arrive to take over.

“It’s not like in the movies, we can’t shock a flatline,” said McNeice. “If we come in and defibrillate somebody and we don’t have good circulation from that bystander CPR, [it's] not going to do anything for the heart.”

For situations where an AED is on hand, McNeice said bystanders should utilize the device to perform rapid defibrillation on the patient’s heart — essentially restarting the electrical activity in the heart back to a natural rhythm.

Bystander use of an AED can more than triple the chance of survival, and it can also give the patient a better chance to recover to their pre-cardiac arrest state. It also provides paramedics more time to arrive on scene, like in Andres’ situation.

Once paramedics do arrive, they will take over and administer professional care, including defibrillation, inserting an IV, and administering a breathing tube or bag valve mask, before the patient is transported to the appropriate emergency medical department.

As a paramedic who has attended many cardiac arrest scenes, McNeice said that the bystander response plays a huge role in how these types of emergencies play out. When he responds to cardiac-related calls, he says he immediately feels more confident for the patient’s chance of survival if there has been someone on scene doing CPR or if an AED has been utilized.

AEDs are becoming more commonly available in public places, especially in most sports arenas, shopping centres, and airports, to name a few. McNeice encourages all businesses to consider getting one for life-or-death situation like these.

He also stressed that it is so important for everyone to be aware of how to respond during a cardiac emergency, and encouraged witnesses to get involved when they see a heart attack happening, even if they are unsure of themselves — as some response is better than no response.

“My advice for bystanders is don’t be scared to get involved. It's a very nerve-wracking situation that's stressful, [but] knowing the signs, maybe taking a CPR course, that might save someone’s life,” said McNeice.

For those interested in taking their CPR certification, contact the Moose Jaw & District EMS for information on the next available training courses.

For more information on symptoms, statistics and emergency advice regarding heart attacks, check out the Heart and Stroke Foundation website for more resources.