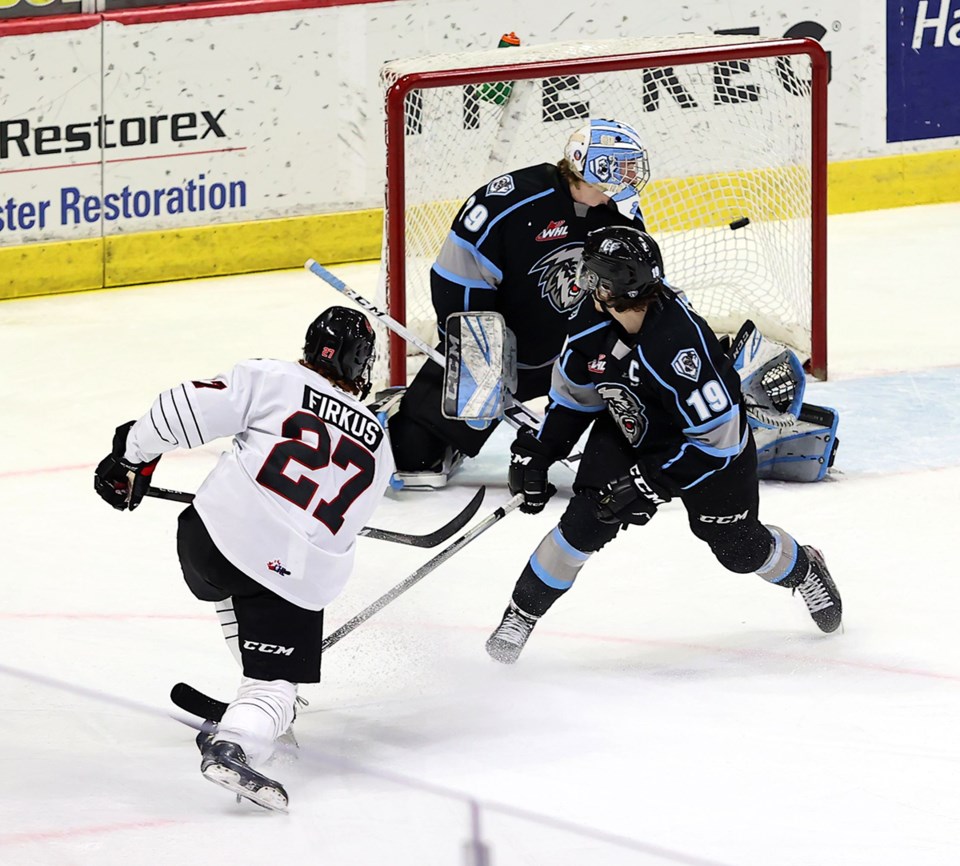 Jagger Firkus scores the opening goal for the Warriors against the Winnipeg Ice.Keith Hershmiller
The Moose Jaw Warriors might have welcomed back some key offensive components to their line-up in Western Hockey League East Division action against the Winnipeg Ice on Tuesday afternoon, but it turns out, if you don’t stay out of the penalty box and take care of business in your own end, it doesn’t matter who is playing.

Forwards Ryder Korczak and Cade Hayes were joined by defenceman Max Wanner in returning to the Warriors after missing two weeks of action due to upper body injuries, but the Ice would score four times in the final 11:30 of the first period on their way to a 6-3 win.

Credit to the local squad, though, that short stretch of awfulness was quickly put in the memory banks and the Warriors were able to turn in the same solid effort that has become a hallmark of their style of play through the last three games.

That four minutes, though...

“I said to the guys after the game that I still liked our game, we had a lull there where four goals ended up in the back of the net in different circumstances, some were in control and some weren’t,” said Warriors head coach Mark O’Leary. “The main thing to me is I thought we started the game pretty well and most importantly we finished the game pretty well. I thought we got better as the game went on and certainly had stretches where we were the better team. So there were lots of positives there, we don’t like the outcome but we’ll accept it and move on.”

The spectre of giving up 5-on-3 power plays reared its ugly head for the Warriors with 11:30 gone in the first and the Ice -- sporting the top power play in the East Division Hub coming into the game -- made the Warriors pay, as Peyton Krebs opening scoring 9:01 into the period.

Connor McClennon then made it 2-0 only 56 seconds later, putting an exclamation point on the importance of staying out of the box against Winnipeg.

Less than a minute after that marker, Zachary Benson pounced on a rebound off a long shot and put the rebound past Warriors starter Brett Mirwald. A minute later, Cole Muir scored with 6:49 left in the first and the Warriors once again found themselves down a bunch early in the game.

Jagger Firkus got one back for the Warriors just over a minute after Muir’s marker, finishing off a two-on-one break with Kade Runke and beating Winnipeg goaltender Gage Alexander low glove side.

Denton Mateychuk would pull the Warriors another goal closer on a power play of their own with three minutes remaining, jumping on a deflection in front of the net and ripping a laser beam top corner over Alexander’s glove.

Korczak drew an assist on the play, his first since Mar. 21 and covering a span of seven games. As one might expect his return and that of the other injured players was a welcome site for the team.

“It was a long time coming,” O’Leary said. “We have most of our line-up back where it was at the start of the year, so that’s exciting. A guy like Korczak especially, not just his skill level but his demeanour off the ice, he has that infectious personality and loves being around the rink and has that enthusiasm that makes us a better team. It’s great to get all those guys back in, Hayser brings a lot to our offence, he’s a guy that just needs one shot to score, and Max play so well at both ends of the ice, it’s nice to get him on the right side with (team captain) Daemon (Hunt).”

As tough as the first period was, the second was much better, as O’Leary alluded to.

The Warriors were able to create pressure in the latter part of the frame, and Atley Calvert was rewarded for the hard work, taking a pass off the boards from Riley Krane and ripping a shot low glove side with 2:42 remaining.

Moose Jaw was able to continue to pressure in the third, but an untimely penalty with just over four minutes remaining led to Jakin Smallwood scoring Winnipeg’s third power-play goal with 4:01 left in the game. McClennon added an empty netter with 1:04 to play.

Krebs finished the game with three assists to go along with his goal.

Mirwald made 25 saves in the Warriors net, Alexander stopped 33 for Winnipeg.

The Warriors fell to 6-7-1-0 on the season and sit tied for fourth place with the Regina Pats, seven points back of third-place Winnipeg with 10 games to play.

Moose Jaw is back in action at the Brandt Centre in Regina on Friday night when they take on the Swift Current Broncos. Game time is 8 p.m.