Korczak puts up four assists to take over WHL scoring lead, Prince Albert here tonight
Nov 2, 2019 7:22 PM By: Randy Palmer
Previous Next
1 / 1 Warriors defenceman Daemon Hunt had a half-dozen scoring chances -- including this one in the second period.
Expand
Previous Next
There was a lot to take out of the Moose Jaw Warriors’ 5-2 victory over the Red Deer Rebels in  Western Hockey League action on Friday night.

The first and immediate interesting storyline was the on-ice return of veteran goaltender Adam Evanoff. After missing the first month of the campaign recovering from off-season hip surgery, Evanoff dressed for his first game of the season last weekend in Saskatoon and was finally between the pipes on Friday at Mosaic Place.

He would end up carrying a shut-out into the third period despite facing a steady barrage of shots and would make 36 saves on the night to earn the win.

Then you had Brayden Tracey.

The Anaheim Ducks draft pick scored four goals for the Tribe, giving him seven in the Warriors' last two games. He’s moved up to 21st in league scoring with eight goals and 16 points in only eight contests.

Despite playing only his second season in the WHL, the 17-year-old forward once again leads the league in scoring after a four-assist night, giving him six goals, 17 assists and 23 points in only 14 games. 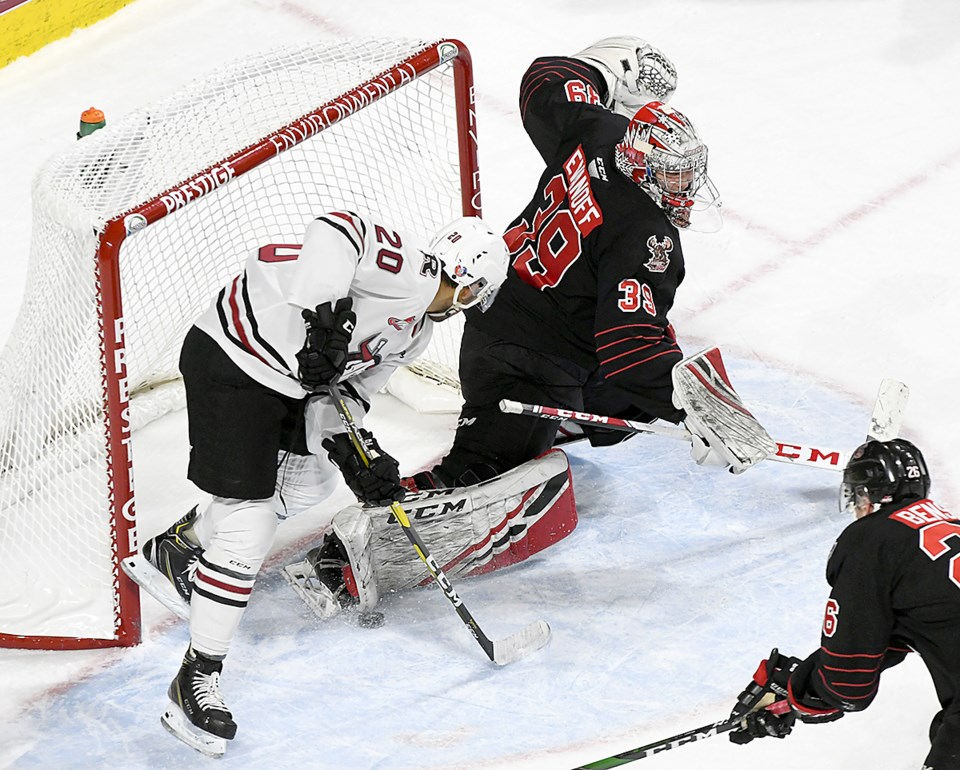 Warriors goaltender Adam Evanoff gets across to make a brilliant save in close on Red Deer's Arshdeep Bains.

“It’s been a long run, so it felt good to get back in there and contribute to the team,” said Evanoff, who last played on Mar. 27 in the Warriors 4-3 season-ending playoff loss to Saskatoon. “I was definitely a little bit nervous, but once I was able to make a few stops I was able to get settled down pretty quick.”
The Rebels made sure to test Evanoff as often as possible but were unable to get a shot past him until early in the third period. Chris Douglas and Jaxsen Wiebe scored for Red Deer at 2:06 and 5:47, with the latter’s goal coming on the power play after Evanoff had discarded his broken goal stick.
Seeing their veteran netminder play as well as he did right off the hop was promising in head coach Tim Hunter’s eyes.

“That’s really important, and you’re always wondering when someone’s been off for quite some time,” Hunter said. “But he’s really trained hard, he’s really worked hard in practice and looked good in practice and we did a lot of things helping him along in game situations, handling the puck and he looked real smooth.
“They put a lot of pucks on him tonight, they obviously knew he hadn’t played in awhile and they were testing him and trying to make him work. But he made a couple of big saves early and then the scrambles later on is stuff he’s going to face anyway. I really liked his effort and it’s a good sign.”
Tracey, meanwhile, has quickly found chemistry with linemate Korczak, something that isn’t much of a surprise given their history. 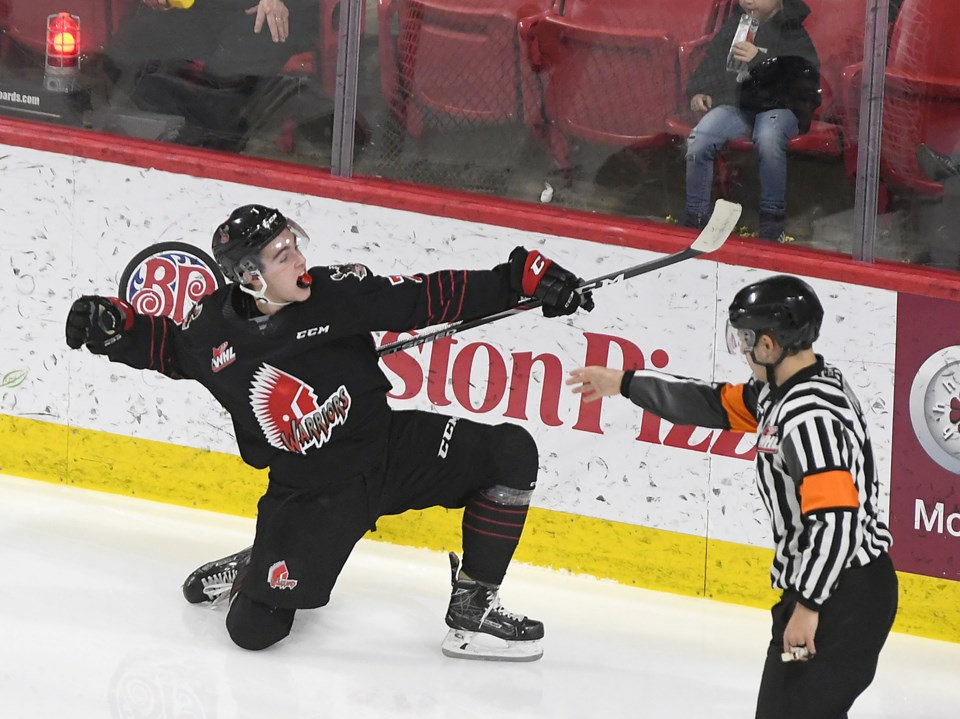 Brayden Tracey celebrates his first of four goals on the night.

“For sure, we’re great buddies and have trained the last two summers together,” Tracey said. “It’s been a blast and obviously once we got the news he’d be coming here this summer we were pumped, we knew we’d be playing together. Showing what we have out here as two young players in the league, obviously we’re thrilled to be playing together and we’re looking forward to what we can do coming up.”

The game was scoreless after the first period before the Warriors scored three in the second to take a 3-0 lead. Matthew Benson scored the eventual game winner with 5:53 to play in the period.

Tracey’s final goal was into the empty net with 1:40 to play.

Jadon Joseph tried to enter the Theo Fleury-Josh Brook stick-between-the-legs-goal hall of fame, but didn't quite get the shot high enough.

It didn’t take long for conversations to quickly shift to tonight’s game as the Tribe take on the fourth-ranked team in the CHL, the Prince Albert Raiders.

“The nice thing is it’s always easier to coach after a win than a loss because they listen to you a lot better when you win rather than lose because they’re despondent,” Hunter said. “So it was a good win, they know P.A. is a good team and I told them if they play like they did in the third period today against P.A., it won’t be the same. They scored five goals in the third period to beat Regina tonight, so it’s a good team that’ll be coming in here.”