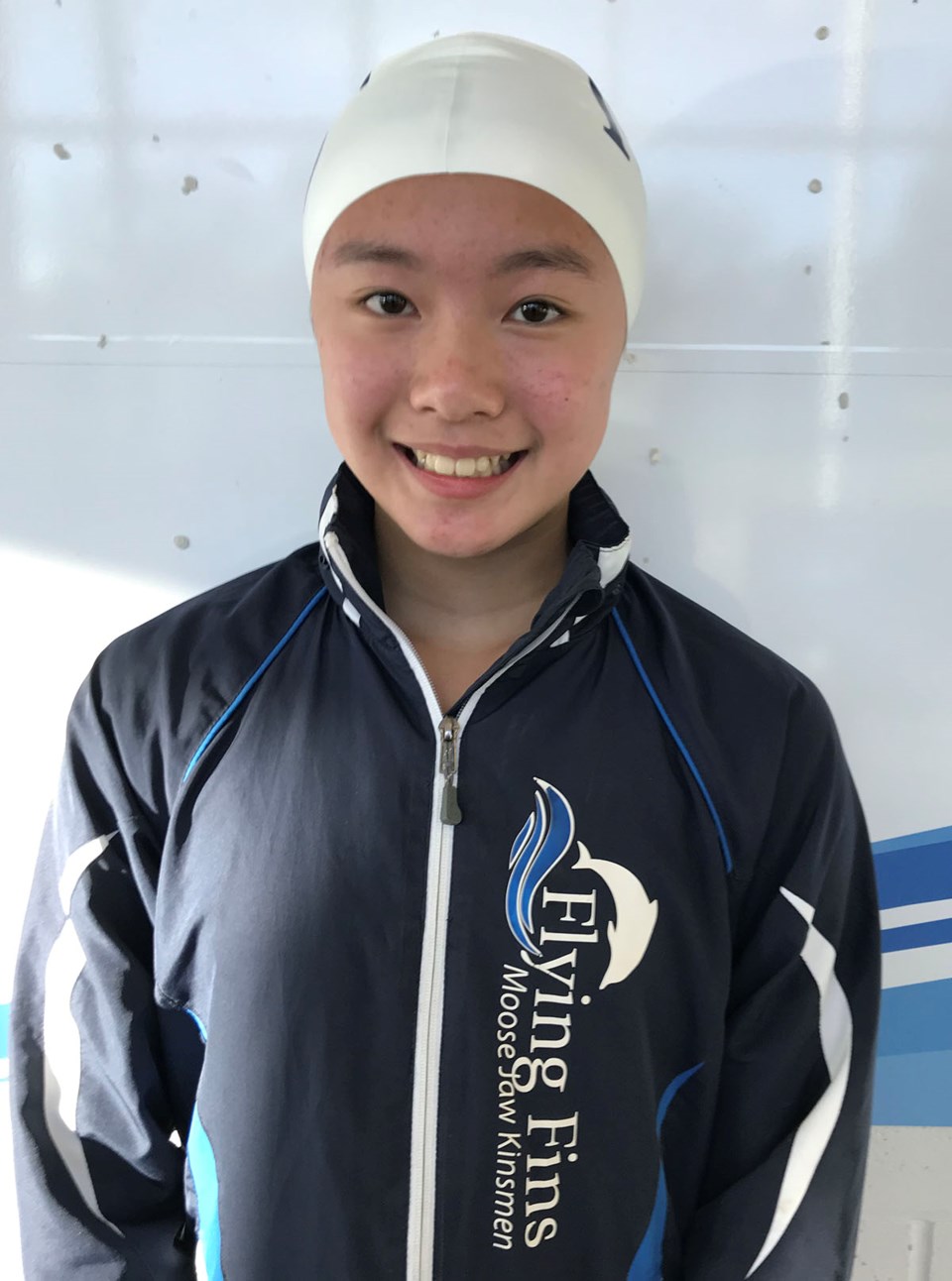 Emily Lin put together a solid showing during the first two events in the SwimAgain Challenge
They might not have actual meets to take part in, but the Moose Jaw Kinsmen Flying Fins are still getting things done in the virtual arena.

Members of the team are currently taking part in a series of weekly events through a special program put together by Swim Canada, the SwimAgain Challenge. The name refers to competitors getting back in the pool in a competitive nature after missing so much time due to the COVID-19 pandemic.

“It’s done like an informal swim meet in the whole pool and the coaches do the timing because we aren’t allowed to have officials on the pool deck yet,” explained Flying Fins coach Gord Shields. “Then we send the results on to Swim Canada in Ottawa and they rank everyone.

“It’s a great motivation for them, because there are no swim meets and that’s what swimmers live by, going to swim meets and being with their teammates and cheering each other on and meeting other friends from other teams. Since there are no meets through the rest of 2020, it’s chance to keep them motivated and focussed on their training.”

The Fins aren’t just going through the motions either.

Emily Lin has put together some of the top results not only in the club and province, but in the entire country. Her time in the Week One event, the 200m kick for time, was 15th overall in the 11-12 year-old division in all of Canada. That’s for boys and girls, with her time of 3:15.61 also landing her with the top showing in Saskatchewan.

Lin also finished in 49th in the 100-metre individual medley in Week Two’s event, putting down a time of 1:18.72 for the third best time in the province.

“Those are excellent results, especially when you have 1,000 swimmers from across Canada,” Shields said. “It’s really great when you’re in the top 10 per cent, at least, and those are combined times for boys and girls, so if it was just girls she would have been in the top 10. So it’s an excellent result and really done well by her.”

Shields also pointed to solid showing from one of the club’s up-and-comers in Molly Mack (10-and-under), who has found herself in the top 20 per cent in all of Canada, as well as the club’s usual suspects in Cadence Johns (15-and-over), Chloe Johns (13-14), Mateah Purdy (13-14), Kate Waldenberger (13-14) and Austin Lin (15-and-over). All have put together top-200 showings through the first two weeks.

“When you have 1,000 swimmers in your age group and 4,000 swimmers competing, a top-200 in your age group is a pretty good accomplishment,” Shields said. “These kids know, they’re smart and they know what they’ve done before and their times from previous meets. “So it’s a great motivator for themselves to beat their own time, that’s their whole goal to swim personal bests and beat their bests times. They do a great job within themselves doing that.”

For a look at the complete results from the first two events -- and in easily sortable fashion, at that -- check out www.swimming.ca/en/swimagain-challenge/.