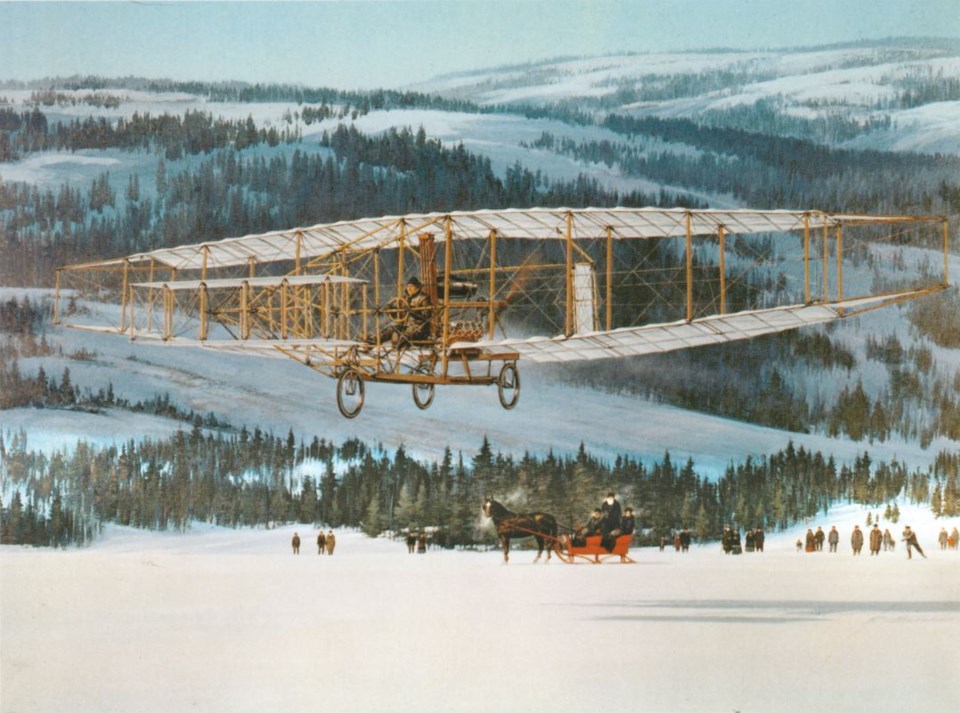 Robert W. Bradford has captured an historic moment win Canadian history with his striking depiction of J.A.D. McCurdy lifting the Aerial Experiment Association’s Silver Dart of the ice at Baddeck, NS on 23 February 1909— with Dr. Graham Bell, standing in the red sleigh, looking on. Courtesy the artist and the Canadian Aviation Museum. Photo submitted by local historians Ann and Bill Heselton.

The Saskatchewan Air Show returns to Moose Jaw this weekend. It will be the first air show at 15 Wing since 2005. To celebrate, this week we look at aviation history in Canada, with a particular focus on local events.

Below is a look at 10 early milestones in Canadian aviation history.

Canada has had plenty of famous aviators over the years. In fact, there are too many to list here.

The list includes early pioneers like John Alexander Douglas McCurdy, who created the Curtis Aeroplane and Motor Company in 1908. He was the first British subject to fly an aircraft in the British Empire when he piloted the Silver Dart. He also founded the first aviation school in Canada.

Of course, there are also famous aces like Billy Bishop and Roy Brown. Bishop is said to have 74 confirmed kills during WWI. He was inducted into the International Air and Space Hall of Fame in 1967. A play about his life has become a classic of Canadian theatre. Meanwhile, Roy Brown is renowned for supposedly being the pilot who took down Manfred von Richthofen, otherwise known as “The Red Baron.” Historians now dispute this achievement, however. As well, some claim Bishop’s record is not entirely accurate either. Regardless, both men are among Canada’s best-known pilots.

Another famous WWI ace was William G. Barker. A Victoria Cross recipient, he is the most decorated serviceman in Canadian history.

The aviation industry has also given us famous astronauts like Mac Garneau, Roberta Bondar and, of course, Chris Hadfield.

Perhaps the first person to fly over the Friendly City was known other than Katherine Stinson, the famous American pilot. Stinson travelled across the country as a barnstormer. She came to Moose Jaw to perform at the fair in August of 1918. A massive crowd came out to watch Stinson’s performance.

According to late historian Leith Knight, Moose Jaw enjoyed its first real “air show” over the course of a week in August of 1921. That is when aerial daredevil Bobby Simpson came to the city for a series of performances. Simpson, known as “The Human Fly,” performed for crowds by completing stunts on the roofs and flagpoles of the city’s tallest buildings. He also rode over the city while sitting on the wheel axle of a plane.

In the 1930s some local doctors used airplanes to meet with patients. In particular, on January 29, 1930 Dr. J.E. Bloomer flew 13 miles northwest to the scene of an emergency. Without the aid of the Moose Jaw Flying Club, Dr. Bloomer would not have been able to make the call, because all roads were unpassable at the time.

On Thursday, April 8, 1954, there was a mid-air collision above Moose Jaw; a Trans-Canada Air Lines North Star passenger plane collided with an RCAF Harvard trainer.

Thirty-seven people died, including 31 passengers, RCAF pilot Thomas Andrew Thorrat, four TCA crew members, and one Moose Jaw resident. Wreckage from the crash was spread across a three-mile radius. The fuselage crashed into a house at 1324 Third Ave. NE.

At the time, it was the site of the worst aviation accident in Canadian history.

In the early 1950s, Canada was looking to develop new aircraft. The Avro Arrow was meant to be a supersonic interceptor jet capable of speeds of up to Mach 2.

Featuring an impressive design, it helped establish Canada as a world leader in aeronautics. Although initial tests seemed promising — during its first flight the Arrow broke several speed records — the project never really got off the ground. Part of the problem is the Arrow was unveiled on the same day the Soviet Union launched Sputnik I. Suddenly, all eyes were on outer space.

By 1959, Prime Minister John Diefenbaker ordered everything shut down. Thousands of people lost their job as a result. Prototypes and blueprints were destroyed. For some, ending the Avro Arrow project remains a controversial decision.

You may remember a Canadian Heritage Minute about the Avro Arrow or a 1997 CBC miniseries starring Dan Akroyd.

About the Author: Scott Hellings