Former host of Daily Planet and current author of The Science of Why book series Jay Ingram shares his insights on science writing
Jul 15, 2020 10:37 PM By: Larissa Kurz 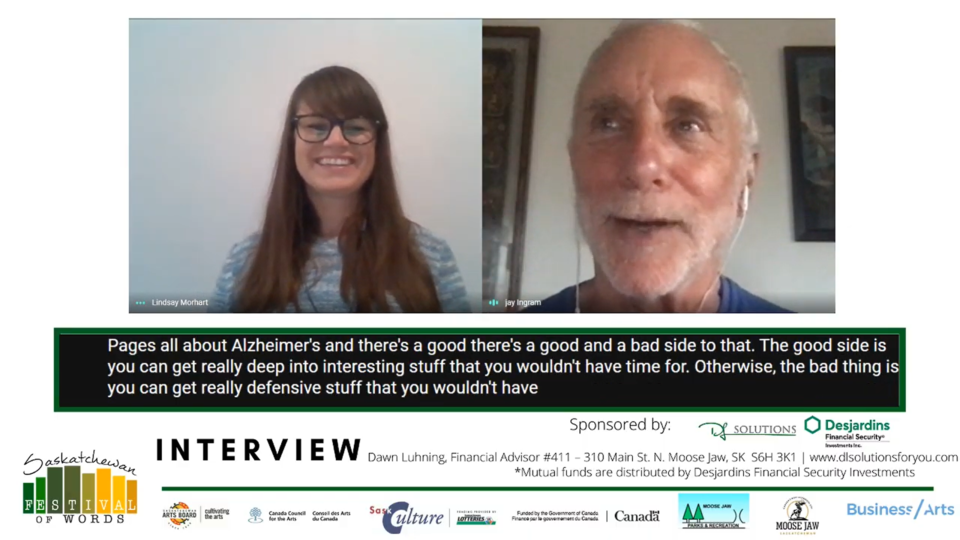 Science writer and former TV personality Jay Ingram (L) in a fascinating interview with Regina educator and science enthusiast Lindsay Morhart during the Festival of Words.

It is probably safe to say that the majority of Canadians know Jay Ingram as “that science guy from the show Daily Planet,” and the popular author and science expert was happy to spend some time back on screen for a fascinating interview at the Festival of Words — except this time he was the interviewee, not the interviewer.

Ingram was joined by Regina principal and fellow science fan Lindsay Morhart, who had lots of interesting questions about the science of science writing and how Ingram finds new topics to share with his audience.

Before his tenure as the host of Daily Planet from its inception in 1995 until he retired in 2011, Ingram also hosted a CBC radio program titled Quirks & Quarks from 1979 to 1992, and is also the co-founder of the Beakerhead Festival, which he described as “if Daily Planet were a street festival.”

Over the years and amongst his other projects, Ingram has also written and published 17 books of his own, including his recent popular question-and-answer book series The Science of Why and his book The End of Memory: A Natural History of Aging and Alzheimer’s published in 2015.

For Ingram, as he shared, he agreed to work on The Science of Why because the format seemed to encapsulate the curious nature of science.

“Science is really a great adventure story, and anybody who is curious can be rewarded by science because you have a question, and it just leads you into it,” said Ingram. “The key to science writing is you not only put something on the table, as in ‘here’s an amazing fact,’ but then you give people insight into that fact.”

Ingram said he usually starts working on a Science of Why book with about 50 questions on his plate, which fluctuates as some lead to dead ends and others are added during the research process.

When asked where he finds the questions that he includes in the books, Ingram admitted that some of the questions included in all five volumes in the series — the fifth being set to release later this year — are actually reverse-engineered when he spots a particularly interesting bit or research.

“I like questions you can explore,” said Ingram. “[And] the thing about communicating science is that really when it comes down to it, science is about people. Any good story of any kind is about people, and that’s why [when] I was on Daily Planet, I didn’t describe it as a science and technology show, I described it as a people show.”

One chapter in a Science of Why book takes about a day to write once he gets in the groove, Ingram said, and usually requires reading between seven and 12 scientific papers for research.

Sometimes, he shared, his research doesn’t reach a neat conclusion but that doesn’t ruffle him too much.

“That’s what science is really about, it's about the search,” said Ingram. “That’s what fascinates a lot of scientists and of course it's frustrating not to know an answer but in a way, all that guarantees is that twenty, 50 years in the future they will still be researching, and so that doesn’t frustrate me at all.”

Moving through several different mediums in his career hasn’t changed Ingram’s desire to continue sharing science with people — at most, it’s really only changed the different ways he researched interesting topics.

Research for a show like Daily Planet was less hands on for Ingram as the host, he shared, while research for his books tends to be deeper. A book like The Science of Why, however, is less intense than a book like The End of Memory.

When asked what topics were currently on his radar of interest Ingram predictably had a few examples ready to share, including the cosmology and the ongoing discovery of new solar systems, the question of why neanderthals disappeared when early homo sapiens did not, and the future of robots and artificial intelligence.

With The Science of Why as his newest project, Ingram shared that he hopes his continued interest in quirky science questions — and his efforts to bring that science to people — will in turn continue to inspire young people’s interest in science the same way his time on Daily Planet did for people in the past.

The Festival of Words continues until July 19, with a full schedule of events available here.

Stay tuned for coverage of the Festival as it progresses through the coming week.