Eighty years ago – The launch of Corvette, HMCS Moose Jaw 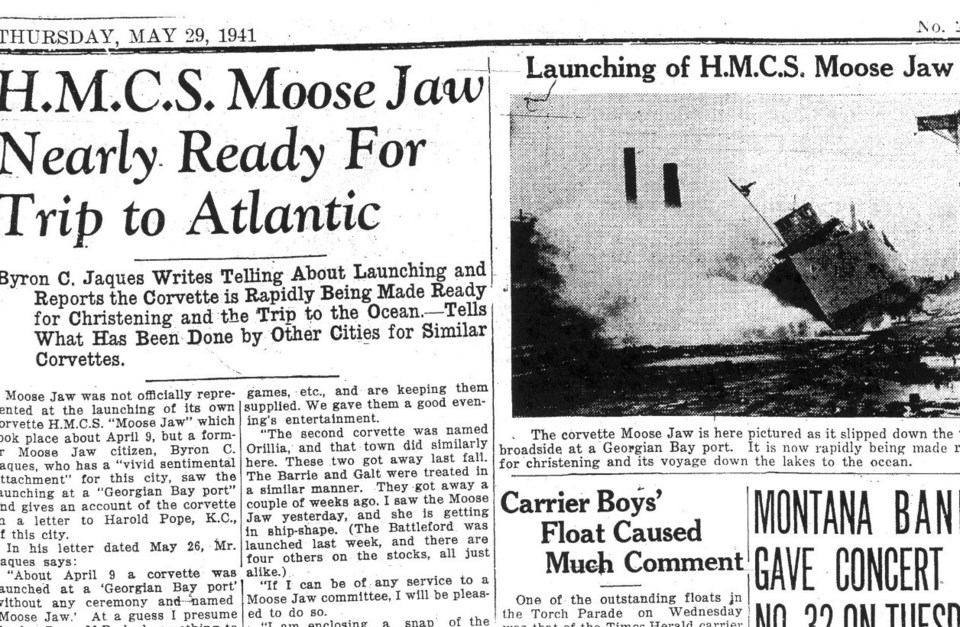 During the Second World War, the Royal Canadian Navy needed convoy escort ships and began building little Corvettes. The Navy had a tradition of naming these ships after cities.

His Majesty’s Canadian Ship, (HMCS) Moose Jaw (K-164) was launched at Collingwood, Ontario on April 9, 1940. The story of the launch was carried by the Moose Jaw Times Herald on May 29, 1941. A copy of the story is included. It is believed the author, Byron Jaques, had lived and farmed three quarters near Briercrest, Sask. before returning to Collingwood, Ont. where he retired.

Corvettes were small Convoy Escort ships. They had a top speed of 16 knots, about the same as a German U-boat on the surface, and had a crew of up to 90. They bobbed and weaved and it was said they would roll on wet grass (the lawn kind).

She ran aground in fog at the entrance to St. John’s Harbour on February 19, 1942 and required repairs.

Moose Jaw was not officially represented at the launching of its own corvette, H.M.C.S., Moose Jaw, which took place about April 9, 1941, but a former Moose Jaw area (Briercrest District) citizen, Byron C. Jaques, who had a “vivid sentimental attachment” to Moose Jaw, saw the launching at a “Georgian Bay port” (Collingwood, Ontario) and gives an account of the launch in a letter to his old friend, Lawyer Harold Pope, K.C., of Moose Jaw.

This little story has several ‘threads’ thanks to former Moose Jaw Drama teacher Lyle Johnson. According to Lyle, during the War, Peacock students (Moose Jaw Technical High School at the time) constructed a model of H.M.C.S. Moose Jaw. It was first on display in a water tank at the local Armoury and later returned to Peacock where it is now on display at the school.

My good friend Lyle Johnson, the Mayor of High Street, is very knowledgeable. In addition to the information about the Moose Jaw, he told me about the famous Saskatchewan Poet Ms Edna Jaques, someone I knew nothing about.

Poking around, I assume — and have not uncovered any confirmation of it — but believe Byron C. Jaques was the father of famous Briercrest, Saskatchewan Poet Edna Jaques.

Several article about her appeared in Maclean's magazine. She was a friend of author and politician Nellie McClung — she was a Lecturer and in 1952 journalist Janice Tyrwhitt wrote, “…what Robert Burns was to Scotland, Edna Jaques is to Canada … the voice of the people.”

She returned to live in Ontario and the City of Collingwood claims her as their own. In 1976 Ontario Premier Bill Davis proclaimed her ‘Woman of the Year’. She died in September 1978 in Toronto.

Not to be outdone — another story about H.M.C.S. Moose Jaw appeared in the Moose Jaw Times Herald on Thursday, June 19, 1941 explaining that the Moose Jaw was ‘christened’ by “… Miss Jane Cory, daughter of Major R. Y. Cory, 48th Highlanders, and Mrs. Cory, of Toronto…” when a bottle of wine was broken over her bow. The Moose Jaw left soon after to Fight in the Battle of the Atlantic.

Also included in the Moose Jaw Times Herald story of Thursday, June 19, 1941 was information about money raised locally for the ship’s company. The article reads:

“The money collected by the Mayors Corvette Fund has been used for purchase three radios to be installed on board the corvette H.M.C.S. Moose Jaw. The radios, one each for the forward and after crews and the officers, have been shipped to Halifax with the compliments and good wishes of the city of Moose Jaw. Mayor J. W. Corman revealed Thursday morning.

“The mayor added that through the good offices of Hal Berry of the National Light and Power Co. Ltd., the radios were being delivered at cost.

“The “Moose Jaw” carries a complement of 52, five officers and 47ratings. Their names are being sought by the city officials, who have written to the minister of national defence for naval affairs at Ottawa. When the names of the crew members are received they will be made public if permission is received from the Dominion government.”